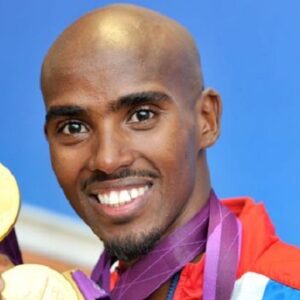 Mohamed Muktar Jama “Mo” Farah is a British distance runner who won Olympic gold medals in the 5000 m and 10,000 m in 2012 and 2016. He is only the second athlete in modern Olympic Games history to successfully defend his 5000-meter and 10,000-meter titles; Lasse Virén was the first. Though he primarily competes in the 5000 and 10,000 meters, he has also excelled in the 1500 meters and marathon. He also holds the British indoor 3000 m record and the current indoor world two mile record. He was born in Mogadishu, Somalia, and fled to the United Kingdom with his family as a child to escape the political chaos in his home country. His first years in the UK were difficult since he struggled to fit in. He was a well-built and athletic young man who began participating in sports at an early age, his first interest being football. He was also gifted at athletics, which he subsequently pursued. At the age of 15, he won the English schools cross country championship, his first major national victory, and he never looked back. Over the years, his national and international running careers flourished, and he became one of Britain’s most decorated sportsmen.

Mohamed Muktar Jama “Mo” Farah was born on March 23, 1983, in Mogadishu, Somalia, to British-born Muktar Farah and his Somali wife, as one of their six children. Somalia was a politically turbulent country plagued by severe violence in the 1980s. When Farah was a child, his family was forced to relocate to the United Kingdom.

His early years in the UK were difficult, as he struggled to fit into society as a youngster from Africa. He had been interested in sports since he was a child, and he could run as well as play football, but he eventually chose running.
From 2001 until 2011, he was a member of the Newham and Essex Beagles athletics club and trained at St Mary’s University College in Twickenham.

Major individuals such as women’s runner Paula Radcliffe and benefactor Sir Eddie Kulukundis backed him up in his running career and helped him become a naturalized British citizen.
In 2001, Mo Farah began training with Alan Storey and won the 5000 meters at the European Athletics Junior Championships.

Mo Farah became Britain’s second-fastest runner after Dave Moorcroft in 2006, when he ran the 5000 m in 13 minutes 9.40 seconds. In the same year, he finished second in the European 5000 m Championships in Gothenburg and the 2006 European Cross Country Championships in San Giorgio su Legnano, Italy.

He also trained in Kenya and Ethiopia during the next few years, winning European medals in the 5000 m and 10,000 m in 2010. In 2011, he relocated to Portland, Oregon, to train with American coach Alberto Salazar.

With a performance of 3:28.81 in the Herculis race in Monaco in 2013, Mo Farah broke the European 1500 m record. He effectively broke Steve Cram’s 28-year-old British record and Fermn Cacho’s 16-year-old European record with this achievement. He also won the 10,000 m and 5000 m events at the World Championships in Moscow the same year.

He was scheduled to compete in the 2014 Commonwealth Games in Glasgow, however he was forced to withdraw due to sickness.

In 2015, he surpassed Kenenisa Bekele’s indoor two-mile world record by running an 8:03.4 in the Birmingham Indoor Grand Prix. At the age of 32, he went on to win the long-distance gold medal double at the 2015 World Championships in Athletics.

His incredible form continued at the 2016 Rio Olympics, where he won gold medals in the 10,000 m and 5000 m, becoming only the second athlete in modern Olympic Games history to successfully defend both the 5000 m and 10,000 m championships, following Lasse Virén.

In the 2013 New Year Honours, Mo Farah was named Commander of the Order of the British Empire (CBE) for services to athletics.

In 2010, Mo Farah married Tania Nell, his longtime girlfriend. The couple is the parents of three children. His family also includes his wife’s prior relationship’s daughter.

Following a trip to Somalia in 2011, he founded the Mo Farah Foundation. In the following year, he won £250,000 on ITV’s ‘The Cube,’ which he donated to the foundation.

Mo Farah has a net worth of $5 million USD and is a Somali-British runner.

This Olympic gold winner is recognized for his “Mobot,” a distinctive victory celebration dance.
This British athlete is the first person to win the entire jackpot on Philip Schofield’s ITV game show “The Cube.”