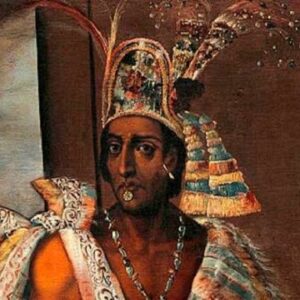 The ninth emperor of the Aztec Empire, Montezuma II (also spelled Moctezuma, Moteuczoma, and Motecuhzoma), ruled from 1502 until 1520. He significantly increased the size of the Aztec Empire, which peaked under his rule. He was a valiant and ambitious warrior who launched a number of military campaigns that greatly contributed to the growth of his empire, which eventually extended to include the areas of Xoconosco in Chiapas and the Tehuantepec Isthmus. As the biological son of Axayacatl, the sixth Aztec Emperor, he was born. He displayed bravery from a young age and proved to be a brave soldier. Montezuma II was a key figure in the military conquests led by the emperors who succeeded his father and were succeeded by his uncle. When his uncle passed away, he succeeded to the throne and was crowned emperor during the height of the Aztec Empire’s splendor. He increased the empire’s size and implemented various administrative reforms. Montezuma had a strong superstition as well. Hernán Cortés, a Spanish conquistador, and his warriors were warmly received by the Aztec Empire since they were seen as divine messengers. The Spaniards took advantage of the situation and imprisoned Montezuma II in his own palace. Following battles, the emperor perished under unexplained circumstances.

Axayacatl, the sixth Aztec Emperor, and Xochicueyetl had Montezuma in 1466. He received an education in religion, science, the arts, and military training, as was traditional for sons of aristocratic birth. He established himself as a brave and gallant warrior at a young age.

In the year 1481, his uncle Tizocic replaced his father as emperor. After only a brief reign, Tizocic passed away in 1486, and his brother Ahuitzotl, a renowned military genius, replaced him.

Emperor Ahuitzotl, who led the expansion of the Aztec empire through a number of military expeditions, hired Montezuma as a commander. Under his uncle’s guidance, the young prince acquired crucial political and military expertise.

At the height of the Aztec Empire’s splendor, he ascended to power. Montezuma II inherited an empire that controlled the majority of central Mexico and stretched into numerous other regions, including the southern United States today and the center of Central America. His predecessor had greatly increased the lands under Aztec sovereignty.

At the time, the Aztec Empire was geographically so large that it was challenging to govern. He had to deal with and put down rebellions and revolts in his area from the beginning. Being a capable military commander, he put down the uprisings that followed violent battles that claimed the lives of several villagers.

During an uprising in the provinces of Nopallan and Icpatepec in 1502, he rose to prominence for his savagery. He took a lot of people hostage, and they were ritualistically sacrificed and eaten at his coronation.

He launched a number of military operations that significantly enlarged the extent of his empire because he was ambitious to further develop the one he had inherited. He subjugated the Mixtec and the Zapotec people between 1505 and 1510.

He was a very superstitious individual who frequently gave orders to kidnap many of the victims for religious sacrifices. Because of his crimes, he lost support over the course of the 1510s and began to experience significant uprisings throughout his realms.

The Aztecs believed that their ancestor god Quetzalcoatl would come back to conquer the empire and they had a great fear of him. The emperor was quite anxious when priests and astrologers advised him that Quetzalcoatl might be born in 1519.

Montezuma was informed as soon as Spanish Conquistador Hernán Cortes and his army arrived at the Aztec Empire in 1519. He was convinced that the Spaniards were sending them rich gifts because they were Quetzalcoatl’s messengers because of his superstitious beliefs.

He then transported Cortes and his troops to Tenochtitlán’s capital city, where he prepared preparations for their luxurious stay. For many months, Montezuma hosted the Spaniards as his guests as he continued to rule his empire. After some time, though, the Spaniards held Montezuma hostage in his own home. Montezuma II had lost all of his authority and prestige as emperor by April 1520.

Montezuma II had a large number of concubines and wives. He had two significant wives: Teotlalco, his first wife, and Tlapalizquixochtzin, his second. He is thought to have fathered more than 100 offspring, many of whom were sons.

The prolonged presence of the Spaniards in Tenochtitlán’s capital city greatly disturbed the populace, and multiple uprisings between the indigenous Aztecs and the Spaniards resulted. The emperor was being held hostage by the Spaniards, who demanded that he speak to the populace to ensure their safety. On July 1, 1520, Montezuma II emerged on the balcony of his palace and pleaded with his people to go.

The Aztecs began throwing rocks and darts at the monarch in retaliation for his involvement and cowardice, which infuriated them. A few days later, the emperor supposedly passed away. The Aztecs asserted that the Spanish killed him, but the Spaniards claimed that he died from wounds caused by his own countrymen.