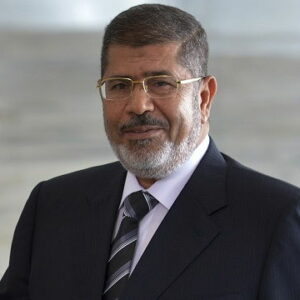 Mohamed Morsi is an Egyptian politician who served as Egypt’s first democratically elected President until being deposed by armed forces. Born and growing up in Egypt, he received his Ph.D. degree from United States and also worked there at the beginning of his career. He later returned to Egypt and became active in politics as a member of the Muslim Brotherhood political group. During this time, he urged the government to make political changes, calling for the repeal of repressive measures, and also positioned himself as a social conservative. The country’s first democratic elections were held after Hosni Mubarak’s regime was overthrown by revolutionary movements in Egypt, and the party chose him as its candidate. He was elected in a democratic election and took office in the midst of political turmoil. After assuming power, he received considerable praise for his early efforts to improve the economy, but his actions also revealed a secret desire for power. He made certain measures toward assuming control of the country, and despite his defense of the decree as a necessary measure to protect Egypt’s democratic transition, major protests against his leadership took place. This deteriorated the situation in terms of law and order, while simultaneously strengthening opposition to his leadership. As a result, the military intervened and removed him from the president, finally placing him under house arrest.

He was born in the Sharqi Governorate, in the hamlet of El-Adwah, Egypt, on August 8, 1951, to a farmer father and a housewife mother. He is from a family of five brothers, the eldest of which he is the eldest.

He graduated from Cairo University with a bachelor’s degree in engineering in 1975 and went on to complete his post-graduate studies in 1978.

His dissertation, “High-Temperature Electrical Conductivity and Defect Structure of Donor-Doped Al2O3,” earned him a Ph.D. in materials science from the University of Southern California in 1982.
Meanwhile, in 1977, he became a member of the Muslim Brotherhood, a political Islamist organization.

From 1982 until 1985, he worked as an Assistant Professor at California State University, Northridge, where he began his career as a lecturer. He also worked for NASA, where he assisted in the development of Space Shuttle engines, as a precision metal surfaces expert.

He left his employment at CSUN in 1985 and returned to Egypt, where he became a lecturer at ‘Zagazig University,’ where he was named chairman of the engineering department, a position he held until 2010.

He was first elected as a Member of Parliament in 2000, standing as an independent candidate because the Muslim Brotherhood was technically forbidden from running for parliament under Mubarak’s rule.

He was a member of the Muslim Brotherhood’s Guidance Office from 2005 until the creation of the ‘Freedom and Justice Party’ in 2011 when he was elected as the new party’s first president.

During Hosni Mubarak’s rule, he was jailed multiple times for various protests; he spent seven months in prison in 2006 and was briefly incarcerated in 2011, along with several other Brotherhood leaders.

After Khairat El-Shater was disqualified from the 2012 presidential elections, he was named as the Muslim Brotherhood’s new presidential candidate.

On June 24, 2012, he was formally named the president of Egypt following the first round of the country’s first democratic presidential elections. He resigned from the presidency of the Freedom and Justice Party almost immediately afterward.

On June 30, 2012, he took the oath of office as Egypt’s first democratically elected president and the first Islamist to rule an Arab country. From July 10, 2012, he re-established Parliament in its original form.

In August 2012, he sacked some of the army’s top leaders and stated that the Supreme Council of the Armed Forces (SCAFconstitutional )’s changes constraining the president’s authority will be repealed.

His government presented plans for the establishment of a large economic and industrial center adjacent to the Suez Canal in October 2012. The next month, he took steps toward gaining more power for himself, causing widespread discontent and mass protests around the country.

By the next year, his acts had become increasingly indicative of his desire for power, and Egypt’s political situation had deteriorated. He also refused to comply with an army demand that the president shares authority or resigns. As a result, millions of Egyptians protested throughout the country to demand his resignation.

Thousands of demonstrators gathered outside his presidential palace in June 2013, demanding that he be removed from office.

Egypt’s military forces deposed him as president on July 3, 2013, and he was placed under house arrest. Meanwhile, the country’s constitution has been suspended, and new elections have been ordered.

In 2013, the National University of Sciences and Technology (NUST) gave him an honorary Ph.D. in recognition of his achievements and substantial contribution to the promotion of international peace and harmony, as well as the improvement of bilateral relations with other Muslim countries.

Naglaa Ali Mahmoud, his cousin, is his wife. The couple has five children: Shaima, a daughter, and Ahmed, Osama, Omar, and Abdullah, four males.

Former Egyptian President Mohamed Morsi has a net worth of $500 thousand dollars. Mohamed Morsi was born in 1951 in El-Adwah, Sharqi Governorate, Egypt, and received most of his education there until earning a scholarship from his home government to study in the United States.