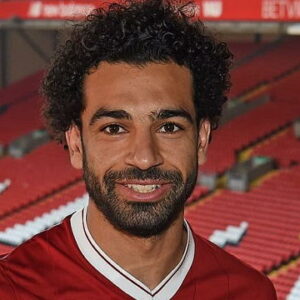 Mohamed Salah is an Egyptian footballer who plays forward for Egypt’s national team as well as Liverpool in the Premier League. He was born and raised in Gharbia, Egypt, and has been a good footballer since childhood. He began his career with the Egyptian club ‘El Mokawloon’s’ youth team. In 2010, he was promoted to the club’s senior team in the ‘Egyptian Premier League.’ He moved to the Swiss football team ‘FC Basel’ in 2012. He was instrumental in Basel’s victories in the Swiss Championship and the Uhren Cup in 2012-13. He joined ‘Chelsea’ in January 2014, becoming the first Egyptian player to play for the club. He then went on to play for ‘Roma’ and ‘Fiorentina’ (on loan) before returning to ‘Liverpool’ in 2017. He was selected ‘African Footballer of the Year’ by the BBC and CAF in 2017.

Mohamed Salah was born in Nagrig, Gharbia, Egypt, on June 15, 1992, to middle-class parents. Mohamed’s parents were concerned since he struggled in school. Mohamed attempted to strike a balance between his academics and sport, but he was never able to improve his grades. Throughout his childhood and adolescence, football was his top priority.

When he wasn’t playing, he might be seen watching football on TV. Some Arabic players were among his early idols. Salah remained entirely involved in football despite his parents’ wishes for him to pursue a traditional career path.
Salah began playing football for fun, but when he joined the local youth team ‘El Mokawloon’ in Cairo, he began to see it as a serious career potential. It was far from home, and he had to change five buses to get to the academy, which damaged his academics even more, but his love for the game kept him focused. He was finally admitted into his club’s senior team in May 2010, when he was 18 years old. Salah began his career as a reserve player, but as his game progressed, he became a regular forward in the club. The ‘Egyptian Premier League’ was shut down in 2012, and the futures of several of its players were in jeopardy.

When the ‘Egyptian Premier League’ was threatened by the ‘Port Said Stadium Disaster,’ Swiss club ‘Basel’ offered him a contract. Basel inked a four-year contract with him in April 2012. In the same year, he made his ‘UEFA Championship League’ and ‘Europa League’ debuts, scoring on numerous important occasions to help his team reach the semi-finals, which they finally lost.

Salah was a key figure in Basel’s 2012-13 ‘Swiss Super League Championship’ success, as well as a strong showing in the Swiss Cup, when they finished second. Salah was a member of the Basel team that won the ‘Uhren Cup’ at the start of the following season. He had two excellent performances against Chelsea in a matter of weeks, which piqued the club’s interest in him. He joined Chelsea in January 2014.

Salah made his Premier League debut for Chelsea against Newcastle United in February 2014, and scored his first goal against Arsenal in March. Salah was expected to return to Egypt to finish his necessary military training before the start of the 2014-15 season, but it turned out that he had visited with Egypt’s Prime Minister and gotten himself exempted.

Chelsea loaned him to Italian club ‘Fiorentina’ until the conclusion of the 2015-16 season in February 2015. Salah made his debut for the club on February 14 and revealed his unwillingness to return to ‘Fiorentina’ at the end of the season. Instead, he wanted to join another Serie A squad, ‘A.S. Roma.’ He was loaned out to ‘Roma’ in August 2015. ‘Fiorentina,’ enraged by Chelsea’s violation of contract, filed a lawsuit in September 2015, but it was later settled, and Salah remained with ‘Roma.’

Salah was named the ‘Best Player’ of the Season and the top scorer with 15 goals towards the end of his first season with ‘Roma.’ Roma’s management approached him in 2016 and he agreed to a permanent contract. Salah couldn’t turn down an offer from ‘Liverpool’ in 2017 despite signing a long-term contract with ‘Roma.’

Salah signed a long-term contract with Liverpool in June 2017 for a club-record 50 million pounds. As a result, he became Liverpool’s first ever Egyptian player, scoring in his first game against ‘Watford.’ Liverpool supporters voted him ‘Player of the Month’ for August. He scored four goals in one of his meetings against ‘Watford,’ leading his team to a 5-0 victory. This was his first hat-trick for ‘Liverpool,’ and by the conclusion of the season, he had 36 goals, making him the team’s top scorer. He has played in 11 games for Egypt’s U-20 and U-23 teams, including the 2011 ‘FIFA U-20 World Cup’ and the 2012 ‘Summer Olympics.’ He finally joined the Egyptian national squad and played in the 2014 ‘World Cup’ qualifications, scoring in nearly every game to help his team reach the final stages.
He was one of the top goal scorers in the 2017 ‘Africa Cup of Nations,’ helping his team reach the finals. In addition, he was named to the ‘CAF Team of the Tournament.’ With five goals in the 2018 ‘FIFA World Cup Qualifications,’ he was his team’s top scorer.

Mohamed Salah is a devout Muslim who does sujood after each goal. Salah’s supporters have stated that if he continues to score goals, they will convert to Islam!
Salah married Maggi in 2012, and the couple had a daughter named Makka. The baby girl was born in London and given the name Mecca after the Muslim holy city.

Mohamed Salah is an Egyptian professional soccer player who has a net worth of $90 million.