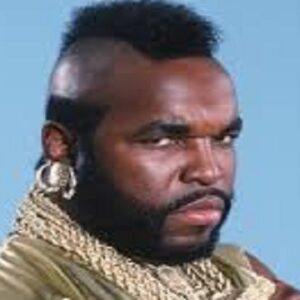 Mr. T is an American actor and former professional wrestler most known for his roles in the Sylvester Stallone film ‘Rocky III,’ as well as the television shows ‘The A-Team,’ and ‘Mister T.’ His rough-and-tumble demeanor, along with an eye-catching African Mandinka warrior hairdo accented with gold jewelry, gives him a unique atmosphere, especially among children. He was a three-time city wrestling champion and a military police officer. He then worked as a bodyguard for a decade, protecting a variety of celebrities, including Michael Jackson and Muhammad Ali. Sylvester Stallone noticed him on the NBC-TV show ‘Games People Play,’ and he earned the role of boxer James “Clubber” Lang in ‘Rocky III.’ He appeared in a few of WWF Wrestle Manias. He made it a point to remain a positive role model for youngsters, recording the CD ‘Mr. T’s Commandments’ for Columbia Records. ‘The A-Team,’ ‘I Pity the Fool,’ and ‘Diff’rent Strokes’ are among his other acting credits.

Mr. T was born Lawrence Tureaud on May 21, 1952, in Chicago, Illinois, the youngest of eight boys and four girls to Nathaniel Tureaud, Sr., a minister (Christianity).

When he was five years old, his father abandoned the family. Following that, he was reared by his mother in a three-room apartment in the public housing complex ‘Robert Taylor Homes’ on Bronzeville, Chicago’s South Side, with his siblings.

He had witnessed horrible acts such as rape and murder as a matter of course growing up in a place defined by poverty and pollution. His brothers pushed him to get into bodybuilding so he could survive in such an atmosphere.

Despite his upbringing, he has emerged clean and successful, and he attributes his success to his mother and his own will to succeed.

He received ordinary grades while attending ‘Dunbar Vocational High School.’ “Most of the time, I just stared out the windows, daydreaming,” he recalls of those days. He did, however, thrive in other school activities such as wrestling, martial arts, and football.

While in high school, he won three city wrestling championships and was awarded a football scholarship to Prairie View A&M University. He majored in mathematics there but was expelled after a year.

Following that, he worked as a military policeman in the Military Police Corps, receiving a recommendation letter from his drill sergeant in November 1975. In a cycle of 6,000 troops, he was named “Top Trainee of the Cycle,” and he was promoted to squad leader.

Following his military service, he attempted to join the Green Bay Packers, a professional American football team, but was unable to do so due to a knee injury.

The Career of Mr. T

He started working as a bouncer in the mid-70s and went by the pseudonym Mr. T, sporting a Mohawk hairdo inspired by a National Geographic shot of an African Mandikan warrior.

He was hired at a nightclub to control violence and keep drug dealers and users out, and he wore gold jewelry left by clients, including the prohibited and misbehaving ones, who could come and collect them without having to go inside.

He was sued several times while working as a bouncer, and each time he won the case. He eventually made contact with a number of celebrities who frequented the nightclub, and these connections assisted him in landing a new job as a celebrity bodyguard.

During his ten years as a bodyguard, he protected people from all walks of life, including celebrities, bankers, preachers, judges, politicians, athletes, and prostitutes, for fees ranging from $3,000 to $10,000 per day. He’d be armed with a.38 caliber snub nose pistol and a.357 Magnum revolver.

Among his notable clients were Michael Jackson, Muhammad Ali, Diana Ross, and Steve McQueen, to name a few. As his reputation developed, he began to receive a variety of lucrative yet unusual proposals, including illegal ones such as murder, which he politely declined.

On April 2, 1982, he starred as himself in the American Blaxploitation drama film ‘Penitentiary 2’.

He was discovered by Sylvester Stallone while competing in NBC’s ‘America’s Toughest Bouncer’ contest, a portion of NBC’s ‘Games People Play,’ and landed the role of Clubber Lang, the major adversary, in the 1982 sports drama film ‘Rocky III.’

From 1983 to 1986, he voiced Mr. T, the coach of a gymnastics team, in the animated TV series ‘Mister T,’ which aired on NBC on Saturday mornings. He also appeared in two distinct TV series in 1983, namely ‘Diff’rent Strokes’ and ‘Alvin and the Chipmunks.’

‘The A-Team,’ an American action-adventure series that aired on NBC from 1983 to 1987, was one of his most well-known TV shows. Sergeant Bosco “B. A.” Baracus was played by him with tremendous aplomb.

In 1984, he released a children’s rap EP called “Mr. T’s Commandments,” in which he encouraged children to internalize good values, listen to their parents, study, and avoid drugs. He also released a motivational film titled ‘Be Somebody… or Be Somebody’s Fool!’ that year.

Meanwhile, from 1984 to 1986, and again in 1988, he was a member of the WWF Superstars of Wrestling. During the first WrestleMania on March 31, 1985, he teamed up with American pro wrestler Hulk Hogan to defeat tag team partners Roddy Piper and Paul Orndorff.

On July 21, 1989, he appeared in World Class Championship Wrestling to assist Kerry Von Erich.
After a break, he returned to the ring in October 1994 for about between Hogan and Ric Flair at WCW’s ‘Halloween Havoc.’ At Starrcade that year, he defeated wrestler Kevin Sullivan.

He hosted Roughcut TV’s ‘World’s Craziest Fools,’ a clip show on the world’s most insane people. The show premiered on June 6, 2011, and lasted on ‘BBC Three’ for two seasons and twenty episodes until March 11, 2013.

Gene Okerlund inducted his name into the WWE Hall of Fame’s celebrity wing in 2014.
He appears in the DIY Network’s ‘I Pity the Tool,’ a home improvement show that aired in 2015.

He has three children with Phyllis Clark, with whom he was married.
He was diagnosed with T-cell lymphoma in 1995.

Mr. T is an American actor with a $1 million dollar net worth. A motivational speaker, actor, and wrestler.