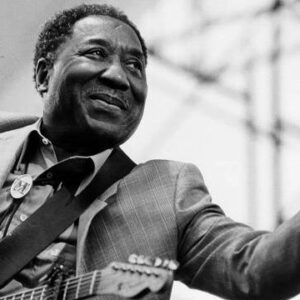 American blues musician Muddy Waters, real name McKinley Morganfield, is frequently referred to as the “Father of modern Chicago blues.” He and his bandmates are responsible for the recordings of several blues standards, including the hits “I Just Want to Make Love to You,” “I’m Ready,” “Hoochie Coochie Man,” “Trouble No More,” “Forty Days and Forty Nights,” and “You Shook Me,” to mention a few. His other recordings include Folk Singer, Electric Mud, After the Rain, Fathers and Sons, The London Muddy Waters Sessions, Hard Again, King Bee, The Real Folk Blues, The Anthology, At Newport 1960, and Live at the Checkerboard Lounge, Chicago 1981. He also performed live and recorded studio albums. Waters, who is known for his collaborations with illustrious record labels like Columbia Records and Aristocrat Records, had a significant impact on jazz, folk, country, hard rock, and other genres in addition to the blues and rhythm & blues. Regarding his honors and recognition, the American musician received numerous Grammy Awards and Blues Foundation Awards over his career. He was also admitted into a number of esteemed halls of fame. In his personal life, Waters married twice and had a large family. At the age of 70, he passed away in his sleep from heart failure.

McKinley Morganfield, also known as Muddy Waters, was born on April 4, 1913, in the Mississippi city of Rolling Fork (other sources list his birth year as 1915). Ollie Morganfield, his father, was a farmer and a blues guitarist.
Soon after Waters’ birth, his father left the household. When Waters was three years old, his mother Bertha Jones passed away, and he moved in with his grandma Della Grant.

When he was five years old, he picked up the harmonica, and when he was a teenager, he started playing music on the streets.

Muddy Waters moved to Chicago in the early 1940s and began living with a relative. A prominent blues musician at the time named Big Bill Broonzy, who he later met, decided to give the young man an opportunity because of his talent. He was given the opportunity to perform in front of a large audience by Broonzy, who allowed him to open his gigs in clubs.

Waters recorded a few tracks for Columbia Records in 1946. He soon began making recordings for Aristocrat Records. On the songs “Little Anna Mae” and “Gypsy Woman,” he also played guitar. He provided the vocals for the extremely popular songs “I Feel Like Going Home” and “I Can’t Be Satisfied.”

With time, his reputation grew, and by 1953, he was recording with one of the greatest blues bands ever, with Little Walter Jacobs on harmonica, Jimmy Rogers on guitar, Otis Spann on piano, and Elga Edmonds on drums. The group released a number of blues standards in the early 1950s, including “I’m Ready,” “Hoochie Coochie Man,” and “I Just Want to Make Love to You.”

Together with Little Walter, Waters released the track “Juke.” The singles “Sugar Sweet,” “Trouble No More,” “Don’t Go Any Further,” “Got My Mojo Working,” and “Forty Days and Forty Nights” were thereafter made available.
Waters’ career started to wane in the late 1950s, and his single “Close to You” became the only one of his songs to chart in 1958. He also published his CD, “The Best of Muddy Waters,” in the same year.

The career of the American artist saw a resurgence in the 1960s as a new generation of music fans began to appreciate his works. At the Newport Jazz Festival, he recorded “At Newport 1960,” his debut live blues album.
In 1963, he cut his album “Fold Singer.” He took part in the inaugural European tour that year and gave additional acoustic-focused performances. Soon after, Waters and Spann issued their joint album, “The Blues of Otis Spann.” The Real Folk Blues, a compilation CD, was subsequently released by him in 1966.

For the album “Super Blues” in 1967, he re-recorded a number of blues standards alongside Little Walter, Howlin’ Wolf, and Bo Diddley. Following this, Cadet Concept released the album “Electric Mud” by Roger Waters. Then, on May 12, 1969, he released the follow-up album “After the Rain.”

They Call Me Muddy Waters, his album, was published in 1971. Waters’ older, previously unpublished songs were included on this CD. The musician’s CD, named “The London Muddy Waters Sessions,” was published the next year.

He performed live at the Checkerboard Lounge in 1981 alongside the Rolling Stones. Later, in 2012, a DVD of this performance was made available. Due to his failing health, Waters stopped performing in 1982. It was at a concert in the summer of 1982 that he gave his final performance.

Muddy Waters released the album “Fathers and Sons” in 1969, featuring performances by longtime admirers Paul Butterfield and Michael Bloomfield who had long desired to collaborate with Waters. The most popular album of Waters’ musical career was this one.

The American musician received the “Grammy Lifetime Achievement Award” in 1992, following his passing.
He won two Blues Foundation Awards in the ‘Reissue Album of the Year’ category in 1994 and 1995. Waters was also featured on the U.S. Postal Service’s 29-cent commemorative stamp in 1994.

Muddy Waters’ first wife was a woman by the name of Geneva. In March 1973, she passed away from cancer, leaving him a widower. He later wed Marva Jean Brooks, his second wife, in 1979. Big Bill Morganfield, Larry “Mud” Morganfield, and Joseph “Joe” Morganfield were among his many children.

The American musician passed away from heart failure while sleeping on April 30, 1983.
Chicago designated a one-block area near Waters’ former home as the “Honorary Muddy Waters Drive” two years after his passing as a mark of respect.

Paul Rodgers paid tribute to the late musician by releasing the CD “Muddy Water Blues: A Tribute to Muddy Waters” in 1993.

Martin Scorsese’s films, such as “Goodfellas,” “The Color of Money,” and “Casino,” have included music by Muddy Waters.

Muddy Waters’s net worth was $5 million at the time of his death in 1983. He was an American blues singer and songwriter. That is equivalent to almost $13 million in today’s money. He was primarily regarded as the originator of contemporary Chicago blues.

Waters’ nickname, “Dirty,” came from his fondness for playing in muddy water.