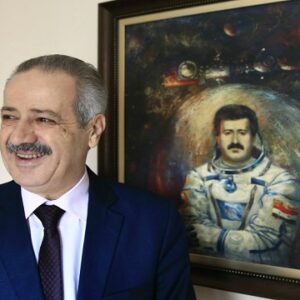 Muhammed Faris is the first Syrian to fly into space as an astronaut. He is also only the second Arab and Muslim to do so, with Saudi Arabia’s Sultan bin Salman bin Abdulaziz Al Saud being the first. He served in the Syrian Air Force as a colonel and pilot after graduating from a military school. Because of his expertise in navigation, he was chosen for the prestigious Interkosmos spaceflight program as part of Soviet space missions, and was the first Syrian astronaut to fly to the Mir orbital space station, along with two other Soviet-national cosmonauts. After a week in space, he returned to Earth after executing a series of successful research experiments in the areas of materials processing and space medicine. The Order of Lenin, the Soviet Union’s highest civilian medal, was bestowed to him by the Soviet government. In 2012, he defected to Turkey and joined the Syrian President Bashar al-armed Assad’s opposition.

He advanced through the ranks of the air force, eventually becoming a colonel. Later in life, he worked as an aviation instructor and navigation specialist.

Following the successful conclusion of his space mission, he rejoined the Syrian Air Force and relocated to Aleppo, where he began training military pilots as the institute’s director in 2001.
He rebelled against President Bashar al-regime Assad’s in August 2012, joining the Free Syrian Army as a commander.

After failing in his previous three defection attempts, he made his fourth try in Turkey, joining a long list of notable defectors that included military generals, former Prime Minister Riyad Hijab, and Brig. Gen. Manaf Tlass.
In the aftermath of growing battles between Assad’s forces and rebels throughout the Syrian Civil War, Turkey has taken in over 45,000 refugees, mostly military refugees.
After hiding for nearly a month, he revealed his reasons for defecting from Syria in an interview with Al Aan TV in September 2012, claiming that he had planned to flee months before but had been stopped due to close surveillance.

On July 22, 1987, he became the first Syrian to join the three-man crew aboard the Soyuz TM-3 in a Soviet space mission to the orbital space station Mir as a research cosmonaut.

Along with two other cosmonauts, Aleksandr Viktorenko and Aleksandr P. Aleksandrov, he conducted scientific experiments in space medicine and materials science, and returned on Soyuz TM-2 after 7 days 23 hours 4 minutes.

Gadil, Kutaib, and Mir are his three children from his marriage to Gind Akil. His third child was called Mir, after the Soviet space station.