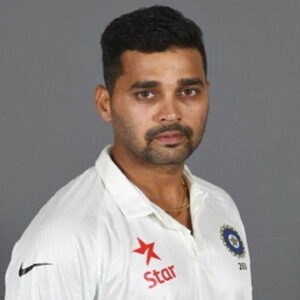 Murali Vijay is a right-handed opening batter for India in international cricket. He was selected to tour with the national squad as a reserve batsman due to his ability to convert opening overs into huge partnerships in domestic cricket. He took advantage of every opportunity to shine while filling in for regular top-order batters, and he finally earned a spot in the national squad. In all three formats, he has been a regular member of the Indian team, although he has not been able to perform regularly. Despite this, he has demonstrated his hard-hitting abilities by scoring two century for Chennai Super Kings in the IPL. He was a part of the team’s success in two IPL seasons and one Champions League T20 series throughout his six years with them. He was later sold to the Delhi Daredevils and then to Kings XI Punjab, but he has recently returned to his former club.

Murali Vijay was born on April 1, 1984, into a well-educated family in Chennai, Tamil Nadu. Murali, his father, is a businessman, and Lakshmi, his mother, is a housewife. Vidya, his younger sister, excelled academically and went on to work for Google in the United States.

Vijay was not interested in ‘bookish knowledge’ as a child, despite his family’s history. He failed his 12th-grade examinations, whereas his sister received a 98 percent. He then left home to ‘discover’ himself and began playing snooker for money in snooker parlors. He also became a partner in a company.

When Vijay was homeless and sleeping in parks, he had a lot of older college-aged buddies who helped him out. For six months, he shared a bedless hostel room with others. He joined in Vivekananda College in Mylapore, Chennai, after passing the board exam, which was known for supporting sports, particularly cricket. He had been playing cricket since he was nine years old, so it was precisely what he needed.

Vijay began focusing on college cricket at the age of 17, after failing to make the U-19 state squad. It was here that he first tried his hand at playing with a leather ball. Former national bowling coach Bharat Arun noticed him and gave him a position on the Chemplast team in Chennai’s club cricket league.

Murali Vijay, who played club cricket for Alwarpet in 2003, was called up to the Tamil Nadu Under-22 side for the CK Nayudu Trophy in 2004-05. Despite his lackluster performance, his squad came out on top. He was brought back to the squad for the next edition of the competition after another year of club cricket, but he failed to impress again.
Despite this, he was given the opportunity to play senior cricket against Karnataka. Later, he faced Railways, but only scored 17 and 38 runs, respectively. However, everything changed when he made his first-class debut in the Ranji Trophy in 2006-07. With 628 runs, he was the third-highest run scorer in the tournament. His maximum score was 179, and his average was 52.33.

Vijay built on his success in the Ranji Trophy season of 2007-08, amassing 582 runs at an average of 58.2 with two centuries. Against Saurashtra, he hit an unbroken 230. While he did not perform well after being named in the South Zone squad for the 2007-08 Duleep Trophy, he struck back-to-back hundreds in the Vijay Hazare Trophy against Hyderabad and Andhra.

In September 2008, he continued his outstanding form by playing for the India A team against the visiting New Zealand A side. In October, he was called up to open for India Red in the Challenger Trophy, where he finished as the second-highest run-getter.

Murali Vijay was called in to replace suspended Gautam Gambhir in the last Test of the Border-Gavaskar Trophy in November 2008, thanks to his big 462-run opening stand with Abhinav Mukund in the Ranji Trophy. Vijay scored 33 and 40 in his opening partnership with Virender Sehwag, for a total of 98 and 116 runs. He also demonstrated his fielding abilities, with two run-outs and a catch.

He was named to the Indian ODI squad for the first three matches against the touring England side, but due to Sachin Tendulkar’s return from a break, he did not get to participate. Gambhir’s next Test opportunity came in December 2009, during the third Test against Sri Lanka, when he was on leave. Vijay had a 221-run partnership with Sehwag, but he was dismissed on 87.

He went on tour with the Indian squad as a reserve batsman, and his next opportunities came in Bangladesh and South Africa, where he replaced injured V. V. S. Laxman and Rahul Dravid. In October 2010, he came in for an injured Gambhir in the second Test against Australia, where he scored his first Test century. He had a 139-run partnership with Tendulkar, including a triple century. Despite the injury, he was cut from the team.

Murali Vijay was a member of the Chennai Super Kings for the first six seasons of the IPL, and his 56-ball-127 and 52-ball-95 helped the franchise win two consecutive titles in 2010 and 2011. He was also the team’s leading scorer during their winning Champions League T20 campaign in South Africa. In an IPL encounter in Chennai a year later, he hit a 59-ball 113 against the Delhi Daredevils.

In the home series against Australia in 2013, he replaced an out-of-form Gautam Gambhir. He hit his second Test century (167) and had a record second-wicket partnership of 370 runs with Cheteshwar Pujara in the second Test. It was followed by a 289-run opening stand with Shikhar Dhawan, which included Vijay’s second 150+ score in as many games (153). With 430 runs, including a half-century, he finished the series as the series’ leading run scorer.

He scored his first overseas century at Trent Bridge in July 2014, during India’s tour of England. He was out on 95 at Lord’s, but he still finished with 402 runs to lead the series. Later that year, he hit a critical 99 and put on a 185-run partnership with his captain, Virat Kohli, during India’s tour of Australia. The following match ended with a score of 144.

Vijay scored his sixth Test century against Bangladesh in a one-match Test series in June 2015. In April 2016, Vijay took over as captain of Kings XI Punjab, replacing David Miller in the middle of the season.
Vijay scored 108 runs in the first Test inning against Bangladesh in February 2017, bringing India’s total to 388. India won the match by 208 runs with a total score of 687. Due to a wrist injury, Vijay was not selected for the Sri Lanka Test series in July 2017. Vijay returned to Chennai Super Kings in 2018.

He was chosen for the England Test series, however he was dropped after only two matches. For the 2018 county season, the Indian opener has elected to join Essex.

In the Specsavers County Championship, Vijay made a century against Nottinghamshire, helping Essex to their fifth win in the series. In both innings, he scored 56 and 100 points.

In 2018, there was some back-and-forth between him and the BCCI as he openly said that he was having “communication challenges” with Indian selectors. He was, nevertheless, selected for the Australia Test series later on.

In November 2008, Murali Vijay made 243 runs for Tamil Nadu, putting together a 462-run opening partnership with Abhinav Mukund, only two runs short of the previous record.

During the fifth edition of the IPL in 2012, Murali Vijay met Nikita Vanjara, the then-wife of cricketer Dinesh Karthik, and the two became linked shortly after. When Karthik found out about their connection, he divorced Vanjara right away, and she and Vijay married in the same year.

At the time of her divorce, Nikita was pregnant with her first child, and she gave birth to son Nirav in 2013. Since then, the couple has welcomed a daughter named Iva and a son.

Murali Vijay had a bad boy image as a kid, and he was known for doing things like throwing ladies into swimming pools for fun.
When he drank ‘Old Monk’ rum, handed to him by a senior player on a chilly night in Delhi for a match, he earned the nickname ‘Monk.’

The net worth of Mr. Murali Vijay is approximately 4.7 million USD.