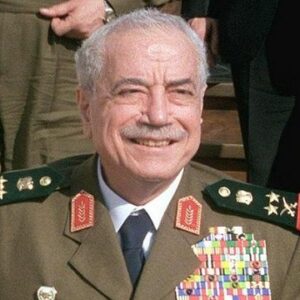 Mustafa Tlass was Syria’s Minister of Defense from 1972 to 2004. He was born into a Sunni Muslim family and attended a local school for his primary and secondary schooling before enrolling in the military academy. He met Hafez al-Assad, who would later become the President of Syria, at the academy and struck up a lifetime connection with him, which helped him establish himself as a powerful military officer and a prominent politician in subsequent years. Tlass escaped to Syria after Assad was jailed by Egyptian President Gamal Abdel Nasser following the dissolution of the United Arab Republic and assisted in conveying Assad’s family to safety. Tlass was appointed to the Baath Military Committee later in life, when Assad rose to prominence in the Syrian government and was given command of a minor army division. Both friends stayed together, displaying their loyalty in the face of countless political battles that raged in Syria for years. Tlass eventually joined Assad’s cabinet as the new Minister of Defense, a position he held for more than three decades until Assad declared himself Syrian dictator. Tlass also became a prominent supporter of Syrian literature, publishing numerous novels of his own that were widely panned for allegedly anti-Semitic content. Tlass resigned from his position and walked away from the political scene after Assad died and his son took over as Syria’s leader.

Mustafa Tlass was born on May 11, 1932, to a prominent local Sunni Muslim family in Rastan, near Homs. During the Ottoman time, his father, Abdul Qadir Tlass, made a career selling ammunition to Turkish garrisons.

In his village, he received his elementary and secondary schooling. He went to Homs in 1947 at the age of 15 and joined the Baath Party. He was lured to its pan-Arabist, secular worldview and became a preacher for its cause.

He enrolled in the Homs Military Academy in 1952, when he met and became acquainted with Hafez al-Assad, an air force pilot.

Mustafa Tlass and Hafez al-Assad, along with many other Syrian Baathist commanders, were stationed in Cairo between 1958 and 1961, during the United Arab Republic merger between Syria and Egypt, to keep them away from political problems in Damascus.

As committed Pan Arab nationalists, both men tried to dismantle the union, which they considered as unfairly stacked in Egypt’s advantage. Several Syrian officers, including Assad, were imprisoned after the United Arab Republic was dissolved in 1961, but Tlass was able to rescue Assad’s family and flee to Syria.

Assad became involved in anti-regime activities in the 1960s and rose to prominence in the Syrian government following the 1963 coup d’état, which was endorsed by the Baath party. Through his ties, he was able to promote Tlass to high-ranking military and party positions.

Tlass imprisoned his pro-government friends as the Baathist army commander of Homs in 1965.
In 1966, a coup led by an Alawite-dominated Baath party helped bolster Assad’s position in the Syrian government, giving Tlass additional influence.

Following the defeat of the Syrian government in the 1967 Six-Day War, Assad nominated Mustafa Tlass as the new Chief-of-Staff to reinforce the military. Tlass headed a military mission to Beijing in 1969, where he negotiated arms deals with the Chinese government.

Assad seized control in 1970 and declared himself Syria’s dictator. Tlass was appointed as the country’s Minister of Defense in 1972, a position he held for for three decades and during which time he became one of Assad’s most trusted allies.

He was effective in silencing all dissenters, regardless of their religious or political affiliations, throughout his tenure as Defense Minister.

He was also a writer who released ‘The Matzah of Zion’ in 1983. He claimed in this book that Jews conduct “blood libel,” or the use of the blood of murdered non-Jews in religious ceremonies such as preparing Matza bread.

He also established a publishing firm in Damascus and was the first to attempt an objective investigation of pre-Baath Syria. Anti-Semitism and conspiracy theories are evident in his writings.
Tlass was on a committee formed after Assad’s death in 2000 to monitor the transition phase during which Assad’s son, Bashar, was named Syria’s new leader.

Hasan Turkmani succeeded him as Syria’s Minister of Defense in 2004. He also left the regional command the next year. ‘Mirat Hayati,’ a two-volume memoir, was published in 2005. (Reflections of my life).

After the uprising against Assad began in 2011, he departed Syria. He declared that he would be receiving medical care in France.

Mustafa is one of the wealthiest politicians and one of the most popular. Mustafa Tlass’ net worth is estimated to be $1.5 million, according to Wikipedia, Forbes, and Business Insider.