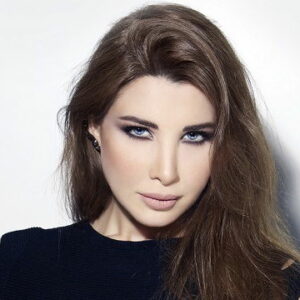 Nancy Ajram is a multi-platinum recording artist and a Lebanese pop folk singer. She was born in Lebanon to a Maronite Catholic family and showed an early interest in music. She first debuted on national television in Lebanon at the age of eight, in a singing competition for children. She earned a gold medal in a Lebanese reality television show called ‘Noujoum Al-Moustakbal (“Stars of the Future”) when she was twelve years old. She began focusing on her voice and taking theoretical courses as a result, leading to the publication of her first studio album as a teenager. Despite the mediocre success of her first two albums, it was her lead single ‘Akhasmak Ah’ and third studio album ‘Ya Salam’ that cemented her place in the Arab world. Her next worldwide best-seller, ‘Ah W Noss,’ established her pop icon status in the Middle East the following year. Her 2008 CD, “Bitfakkar Fi Eih,” highlighted her mature vocal powers like never before, earning her her first World Music Award for Best-selling Middle Eastern Artist. She has recorded a number of studio albums, as well as additional chart-topping singles and two children’s albums, to date. Despite the great reception she has received, she has been chastised in the Arab world for being presented as a sex symbol. She is a well-known philanthropist and humanitarian who is admired for her liberal views and lovely singing.

Nancy Ajram was born in Achrafieh, a neighborhood of Beirut, Lebanon, on May 16, 1983, to Nabil Ajram and his wife, Rimoda Oun. Nabil Ajram Jr., a singer, and Nadine Nariman Ajram, an actress, are her younger siblings.
She began singing on stage at the age of eight, when she competed in a national televised singing competition for children in Lebanon in 1991.

She earned a gold medal in the Tarab category of a Lebanese reality television program called ‘Noujoum Al-Moustakbal’ (Stars of the Future) in 1995 when she was 12 years old.
‘Mihtagalak’ (I Need You) was her first album, released in 1998, followed by ‘Sheel Oyoonak Anni’ (Get Your Eyes Off Me) in 2000. Both albums had a moderate amount of success.

Nancy Ajram shot to fame in early 2003 with the track ‘Akhasmak Ah,’ which received a lot of attention. She followed up with the release of her third studio album, ‘Ya Salam’ (Oh Wow), which was a big success.
In April 2004, she released her fourth album, ‘Ah W Noss’ (Yes, and a Half), which was likewise a major hit. Her CD also positioned her as one of the Arab music industry’s A-list stars.

Her fifth album, ‘Ya Tabtab Wa Dallaa,’ was released in February 2006 and became her most successful to date. With the release of six music videos, eight radio singles, and five commercials, the album earned worldwide praise.
‘Shakhbat Shakhabit,’ her debut children’s record, was released in 2007. (Scribbled Doodles). The album included a range of songs with the goal of instilling excellent values and morals in children.

‘Meen Gheyri Ana (Nossel Kawn)’ (Who Else?) was included in three Coca-Cola advertisements the following year. Her seventh album, ‘Betfakkar Fi Eih?!’ (What Are You Thinking About?! ), was published in July 2008 and is regarded as one of her most successful.

Her 2008 studio album, ‘Betfakkar Fi Eih?!,’ was a huge success upon its debut and is widely regarded as one of her most enjoyable efforts. “Biteegy Sirtak,” a ‘Tarab’ song, was included on the album, as were other successes including “Meen Ghairy Ana,” “Wana Ben Idek,” and “Lamset Eed.” The record was a huge commercial and critical success for her, and it helped her gain international prominence.

She won the ‘Murex D’or Award’ for ‘Best Female Lebanese Singer of the Year’ in 2003, 2005, and 2007.
In 2004, she was named the ‘Arabic Music Award’ winner for ‘Best Female Arab Singer of the Year.’
She was named one of the ‘Most Influential Arab Personalities’ by Kuwait’s ‘Newsweek’ in 2005.
She won her first ‘World Music Award (WMA)’ for Best-selling Middle Eastern Artist for her album ‘Bitfakkar FiEih’ in 2008.

She is also an active humanitarian who takes part in a variety of charitable activities and concerts. Nancy Ajram’s Charity Organization, based in Beirut, Lebanon, was founded in 2006 to collect and distribute funds for the destitute.

Nancy Ajram is regarded as one of the Arab world’s wealthiest and most successful musicians. Her personal fortune exceeds $16 million.