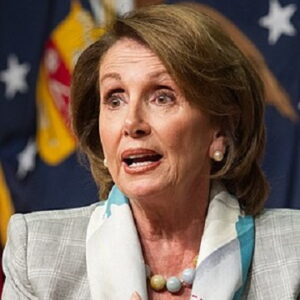 Nancy Pelosi is a powerful American politician who is the first woman to be elected Speaker of the United States House of Representatives. She was born into a politically engaged Italian-American family in the 1940s. She was born and raised in Baltimore’s Little Italian neighborhood, and she was naturally drawn to politics at a young age, learning the ropes from her father, Thomas D’Alesandro Jr. He was a well-known Democrat from the city. She did not, however, take part in politics in Baltimore. She became a volunteer organizer for the Democratic Party after moving to San Francisco with her husband and children, quickly gaining a reputation as an adept fundraiser. She progressed through the ranks of the Democratic Party of California, serving on the Democratic National Committee as well, before being elected to the House of Representatives at the age of 47. She has maintained her seat until now. During her tenure, she rose through the ranks of the House Minority Whip, House Minority Leader, and Speaker of the House, all while voting for gun control and abortion rights. She collaborated with Obama to pass the health-care law as Speaker. She is now the Minority Leader in the House of Representatives.

Nancy Pelosi was born on March 26, 1940, in Baltimore, Maryland, as Nancy D’Alesandro. Thomas Ludwig John D’Alesandro Jr, her father, was a second-generation South Italian immigrant. He was born in Baltimore and served as the United States Representative for Maryland from 1939 to 1947, as well as Mayor of Baltimore from 1949 to 1959.
Annunciata M. “Nancy” D’Alesandro, née Lombardi, was a first-generation Italian immigrant from Campobasso. She was a law student who quit out to marry Thomas Ludwig John D’Alesandro Jr. She then rose through the ranks of the Democratic Women’s Club in her community.
Nancy was the youngest of her parents’ six children when she was born. Thomas D’Alesandro III, Franklin D. Roosevelt D’Alesandro, Hector D’Alesandro, Nicholas D’Alesandro, and Joseph D’Alesandro are her five older brothers. From 1967 until 1971, Thomas D’Alesandro III was the mayor of Baltimore.
Nancy grew up on Albemarle Street in Baltimore’s Little Italy, a predominantly Roman Catholic working-class community that supported the Democratic Party. Growing up there had a significant influence on her, influencing the trajectory of her life.
Her mother wanted her to be the one. Having a daughter or a son enter the church was considered an honor for the family back then, and her mother wanted her to be the one. Nancy, on the other hand, had no desire to become a nun, choosing instead to become a priest because she had recognized that priests had actual power.
Her father was elected Mayor of Baltimore in 1947, when she was seven years old, and served three terms. She quickly earned the nickname “Mayor’s Daughter” and frequently participated in campaigns, learning the ins and outs of politics from him. She went to her first Democratic National Convention when she was 12 years old.
A Republican poll worker once gifted her a toy elephant since she was born to Democratic parents. She refused to take it, despite the fact that she was still quite young. Later, she was given responsibility for the book in which her father kept track of favors he had done or due.
Nancy had her formal education at the Institute of Notre Dame in Baltimore, a private Catholic all-girls high school where she graduated in 1958. She then moved to Washington, DC, to attend Trinity College, an all-school women’s administered by the Sisters of Notre Dame de Namur.
Nancy has never been to Washington, DC before. She later compared the move to “going to Australia with a backpack” in an interview with J. D. Heyman. Despite this, she was able to find her way. She was photographed with President John F. Kennedy at his inaugural dance in 1960.
She received her B.A. degree in political science from Trinity College in 1962. She worked as a congressional intern for Senator Daniel Brewster of Maryland for a brief time. She dabbled with the notion of studying law at the same time.
Nancy never went to law school; instead, she married Paul Pelosi in September 1963 and had five noisy children by 1970. As a result, she put her political ambitions on hold and focused all of her time and attention on raising her children.

In the city of San Francisco,

Nancy Pelosi and her family relocated to San Francisco in 1969, where she continued to focus on raising her children. She became involved in politics at the same time, hosting parties at her home and volunteering for the Democratic Party during election campaigns. She also made friends with powerful figures such as Philip Burton.
Pelosi began working for California’s popular governor Jerry Brown in 1976, when he ran for President, and launched a successful “Brown for President” campaign in her home state of Maryland. Brown was able to pull off an unexpected victory there as a result of it.
Although Jerry Brown lost to Jimmy Carter in the election, Pelosi’s reputation as a successful organizer and fund raiser was reinforced as a result of the campaign. She was elected to the Democratic National Committee in 1976 and served as California’s representative until 1996.
She was elected Chairwoman of the Democratic Party of California’s Northern Section on January 30, 1977, and served in that post for four years. She was then elected Chairwoman of the Democratic Party of California in 1981, a position she held until 1983.

Entering the House of Representatives

Nancy Pelosi remained in the background until 1986, selecting candidates and ensuring their election. She had never considered entering a competition. All of that changed, however, when her close friend and California Representative Sala Burton became critically sick. She asked Pelosi to take her place.
Following Sala Burton’s death on February 1, 1987, Pelosi ran for and won a special election on April 7, 1987. On June 2, 1987, she won the final election, decisively defeating Republican challenger Harriet Ross. She took over the office a week later and has held it ever since.
Pelosi quickly established a reputation as a hardworking, but family-oriented woman. She advocated for additional government funding for AIDS research, getting it in the end, because San Francisco had a disproportionately large number of people diagnosed with HIV.
She objected to a new foreign strategy aimed at strengthening commercial connections with China. On a trip to China in 1991, she brandished a protest banner in Tiananmen Square, where the Chinese Army had killed down at least 700 protesters in 1989. She was a member of the US House Committee on Appropriations and the US House Permanent Select Committee on Intelligence in the 1990s. She also became a member of the House Baltic Caucus sometime after 1997, a position she has held since then.

Nancy Pelosi was elected as the House Minority Whip for the first time in 2001. She was the second-in-command to Minority Leader Dick Gephardt in this post. In 2002, after Gephardt resigned, she was chosen Minority Leader, making her the first woman to hold this role.
Pelosi was unanimously elected as the Democratic nominee for Speaker of the House on November 16, 2006. She was elected Speaker of the House of Representatives after the Democrats took control of the House of Representatives after the 2006 midterm elections because the position is normally held by the majority party.
Pelosi was sworn in as Speaker of the House on January 4, 2007, after defeating Ohio Republican John Boehner. She was the first woman, Italian-American, and Californian to hold the position. She highlighted her election as a watershed event for American women in her speech.
She withdrew from all House committees after becoming Speaker of the House. She rarely participated in debates and voted on the floor during her term, despite the fact that she was allowed to do so as the Leader of the House Democrats and a full member.
Despite her regular abstention from voting, she continued to support abortion rights and gun control. Pelosi not only vigorously opposed President Bush’s attempt to change Social Security, but she also placed a whip on her party members, resulting in the proposal’s failure.
She was as outspoken in her opposition to the Iraq War, slamming President Bush for it. She was, however, opposed to his impeachment, and after taking office in 2007, she stood firm in her belief.
Cindy Sheehan, her opponent and an anti-war activist, exploited her refusal to impeach President Bush during the November 2008 election. Despite this, she was re-elected to the position of Speaker, which she assumed in 2009.
Pelosi became an outspoken backer of several of Barack Hussein Obama II’s ideas when he was sworn in as the 44th President of the United States on January 20, 2009. She aided the incoming President in passing a $787 billion stimulus package in February. She also worked for more than a year on Obama’s health-care law, which she helped pass. The bill passed the House by a vote of 219–212. The law, which went into effect in March 2010, provided health coverage to 30 million formerly uninsured citizens.

On November 2, 2010, Democrats lost their majority in the House of Representatives, and with it, Nancy Pelosi’s position as Speaker of the House was lost. She was eventually elected Minority Leader for the 112th Congress, despite facing criticism for her party’s failure.
When Ohio Congressman Tim Ryan attempted to replace her as Minority Leader in November 2016, she faced her first test. She rose to the occasion by promising to give the next generation more leadership opportunity. She was able to defeat Ryan with a score of 134–63 as a result of her approach.
By 2017, Democrats had lost four special elections in a row in the House of Representatives, putting Pelosi’s leadership to the test once more. Despite the wishes of many prominent Democrats to have her resign, she has continued to lead the Democratic caucus in the House of Representatives to this day.

Nancy Pelosi was given the Knight Grand Cross of the Order of Merit of the Italian Republic on June 2, 2007. In the same year, she was honored by the National Italian American Foundation with the Special Achievement Award for Public Advocacy (NIAF).
The Japanese government honored her with the Grand Cordon of the Order of the Rising Sun on April 29, 2015.
Mount Holyoke College awarded her an honorary Doctorate of Law degree on May 20, 2018.

Nancy D’Alesandro married Paul Francis Pelosi in the Cathedral of Mary Our Queen in Baltimore on September 7, 1963. They first settled in the New York City area, where Paul worked as a banker, and they stayed there until 1969. They then relocated to San Francisco, where they have remained until now.
Nancy Corinne, Christine, Jacqueline, Paul Jr., and Alexandra are the couple’s five children, all of whom were born within the first six years of their marriage. Christine, for example, followed in her mother’s footsteps and became a political strategist for the Democratic Party in California, while Alexandra grew up to be a journalist, documentary filmmaker, and writer.

Pelosi has frequently been on Forbes’ list of the world’s 100 most powerful women. She was ranked 26th on the list in 2014.

Nancy Pelosi, according to Republican National Committee Chairman Ken Mehlman, was a “prehistoric Democrat,” not a “old” or “new” Democrat.
Pelosi adores chocolate and chocolate ice cream, and she has Ghirardelli chocolates in her office at all times. She also enjoys solving crossword puzzles, and completing New York Times crossword puzzles is one of her favorite pastimes.