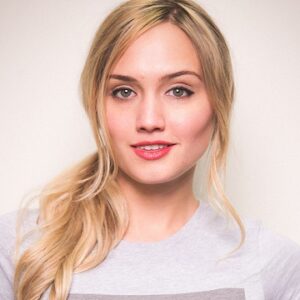 One of the most well-liked females in the traditionally male-dominated gaming industry is Naomi Kyle. The Canadian gamer who lives in the US is most known for hosting IGN Entertainment’s online video productions. Since 2011, she has served as the host of the acclaimed video series “The Daily Fix” on IGN. She also spent a few months hosting an online news program called “The Daily Brief” for AskMen.com. She had previously enjoyed success as a model, appearing in domestic and foreign commercial campaigns for brands like Adidas, Guess, and Virgin Mobile. She also made an appearance in a Joe Fresh national television commercial. She participated in a video shoot for Elegant Wedding Magazine in 2010. She has also tried her hand at acting. She appeared in a minor part as a news reporter in the premiere episode of the Julia Voth-starring television miniseries “Project: SERA” in 2012. She had a prominent part in Al White’s 2013 short film GEEKS, which he also wrote and directed. She was highlighted in the Netflix documentary “Atari: Game Over” in 2014. She had a cameo appearance in the 2015 June 26 global release of the biographical film “Batkid Begins” the following year.

Before deciding to pursue a career as a host for gaming programs, Naomi Kyle explored a variety of professions. She experimented with dancing, sketching, music, and film editing. She spent four years as a salesperson in a family-run music store in Montreal throughout her college years. Next Canada, one of the best modeling agencies in the world, then chose her as a model. She even spent some time working in certain restaurants. Her career, though, changed when she was 22 years old and was hired by Gameloft to host a video podcast. Kyle, who gained popularity right away, began to love her first hosting position and ultimately made the decision to combine her passions for video games and film editing to pursue a career in online video game broadcasting. In an effort to get hired to host one of their events, she created a little demo reel and sent it to IGN Entertainment, one of the top gaming and entertainment websites in the business. It’s interesting that IGN invited her to see their staff in the USA because they were already aware of her work. She was finally selected to host IGN’s hugely successful video series, “The Daily Fix,” in 2011, at which point she relocated to San Francisco, California. “Cheap, Cool, Crazy,” a program about odd but fantastic things accessible online, was one of her pet projects at IGN and ran for a considerable amount of time.

Naomi Kyle frequently serves as a judge for cosplay competitions and routinely attends comic and video game conventions. She also takes part in a number of panels, including those about women in the video gaming business. However, her male supporters frequently express shock upon witnessing a professional woman working in the video game industry. She is aware of this and has given comprehensive information about her gaming past on her website. She got into video games early and frequently played on their Super NES console with her younger brothers. She played her first video game ever, Donkey Kong Country. She became so dependent on gaming that she even started setting up her pocket money after her parents declined to purchase a new console once the PS1 was released. However, after purchasing her own PS2 console, her interest in gaming significantly increased. She has pleasant memories of playing PlayStation games like Beyond Good & Evil, Resident Evil, and Tomb Raider. She didn’t have the luxury of having two systems when the Xbox 360 was initially released, but a few years later she got one and fell enamored with Mass Effect II. She also played a variety of PC games, but because she lacked a powerful setup, her PC gaming experience was not very good.

In the small Canadian village of Sainte-Agathe-des-Monts in Quebec, Naomi Kyle was born on January 13, 1986. She has two younger brothers and is the oldest of three kids. She stated that she views her parents as her role models and that they never pressured her to follow a certain career path in a Q&A session on her YouTube channel. She attended Dawson College in Montreal to study music and film since she was interested in the arts. She initially enrolled in a jazz and piano music degree, but after a year she changed to a communications and media course. She is bilingual and speaks French with ease. She has two cats that she brought into the US on separate flights from Canada since she loves animals.

Naomi is one of the wealthiest and most well-known game show hosts. Our study of Naomi Kyle’s net worth from sources including Wikipedia, Forbes, and Business Insider indicates that it is roughly $1.5 million.