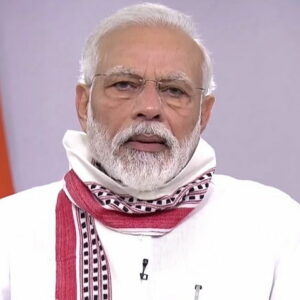 Narendra Modi is a well-known Indian politician and the country’s current Prime Minister. He is well known for leading the Bharatiya Janta Party (BJP) to a historic electoral victory in 2014. He was the first Indian Prime Minister to be born after the country’s independence. He progressed from a poor tea-selling youngster to a development-minded politician, finally serving as Gujarat’s longest-standing chief minister for 12 years. Following the Gujarat riots in 2002, he became a divisive figure. His government has been accused of failing to do enough to quell the unrest. He is a protégé of L.K. Advani and is noted for his incisive decision-making abilities in leading an incorruptible administration. Even while his economic initiatives have been commended, he has been chastised for failing to make significant progress in Gujarat’s overall human development. He stated various programs and policies that his government aims to undertake in its 5-year tenure after taking office as Prime Minister.

Narendra Damodardas Modi was born in the small Gujarati hamlet of Vadnagar on September 17, 1950. Damodardas Mulchand Modi was his father’s name, and Heeraben Modi was his mother’s. Narendra Modi was the third of his parents’ six children. He was born into the backward Ghanchi community and began selling tea at the Vadnagar railway station when he was very young, later opening a tea kiosk beside a bus stop with his brother.
After finishing his education in Vadnagar in 1967, he left home and journeyed across India, visiting Rishikesh, the Himalayas, the Ramakrishna Mission, and Northeast India to learn about the country’s vast terrain and rich culture.
After two years, he returned home and in 1971 joined the Rashtriya Swayamsevak Sangh (RSS) as a full-time pracharak (campaigner) in Ahmedabad.
In 1978, he received a bachelor’s degree in political science from Delhi University via correspondence, and in 1983, he earned a master’s degree in political science from Gujarat University.

Modi lived underground and traveled in disguise during the 1975-77 national emergency declared by then-Prime Minister Indira Gandhi. To fight the regime, he used a variety of measures, including publishing and distributing leaflets. This highlighted his management, organizational, and leadership abilities. He joined the BJP in 1985 and was named the Gujarat Unit’s organization secretary in 1987. He ran for and won the Ahmedabad Municipal Corporation elections, giving the BJP its first ever victory.
After assisting in the organization of L.K. Advani’s Ayodhya Rath Yatra in 1990, which became his first national-level political task, and Murli Manohar Joshi’s Ekta Yatra in 1991-92, his abilities were acknowledged inside the party.
Following the 1990 Gujarat Assembly elections, he played a key role in bolstering the BJP’s representation in the state.
The party won 121 seats in the 1995 elections, becoming Gujarat’s first-ever BJP administration. The party was in power for for a few months, ending in September 1996.
He was named National Secretary of the BJP in 1995 and went to New Delhi to supervise efforts in Haryana and Himachal Pradesh.
In 1998, he was appointed General Secretary (Organization), a position in which he helped the BJP win the Lok Sabha elections by resolving internal political conflicts.
He ran for the first time in the Gujarat assembly elections in 2002, winning a seat from Rajkot-II and becoming the state’s chief minister. His government has been accused of failing to do enough to prevent the Gujarat riots of 2002. In reprisal for the burning of Hindu pilgrims in a train near Godhra, rioting erupted.
Following criticism from both within and outside Gujarat, he was compelled to resign as Chief Minister. After the BJP won the assembly elections in December 2002, he was re-elected as Chief Minister.
Modi was handed a clean chit by the Supreme Court after various probes by a Special Investigation Team (SIT) found no proof of his involvement in the violence.
Despite his claims that he has taken steps to improve Gujarat’s wealth and growth, various studies and figures show that the state ranks poorly in terms of human development, education, nutrition, and poverty alleviation.
In the 2014 Lok Sabha elections, he was chosen as the BJP’s prime ministerial candidate, despite opposition from prominent party veterans such as L.K. Advani. He did, however, win both of the seats he ran for (Varanasi and Vadodara), finally retaining the Varanasi seat.
In the 2014 elections, the BJP won a historic 282 of 534 seats, defeating the ruling United Progressive Alliance (UPA) led by the Indian National Congress.

Following the resignation of the current Gujarat Chief Minister, Keshubhai Patel, due to his declining health, corruption charges, and poor handling of the Bhuj earthquake, he was chosen as a replacement and sworn in as Chief Minister in 2001.
When he was re-elected in 2002 for a second term, he focused on the state’s economic development, finally transforming it into a desirable investment destination for businesspeople and industrialists. In 2007, he was re-elected Chief Minister for a third term, during which time he increased agricultural growth, gave power to all villages, and ensured the state’s rapid development.
During his time as Gujarat’s Chief Minister, the government encouraged the development of groundwater conservation initiatives. This aided the development of Bt Cotton, which could be watered using tube wells, and Gujarat became the world’s largest producer of Bt Cotton as a result.
Gujarat’s government, led by Modi, ensured that every village in the state had access to power. By dividing agricultural and rural electricity, he dramatically altered the state’s power distribution system.
Modi was a key figure in both the 2009 and 2014 election campaigns for the BJP.
During his time as Gujarat’s Chief Minister, he was successful in attracting international investment to the state.
Since becoming India’s 15th Prime Minister, he has launched a slew of ambitious projects and programs, including “Swachh Bharat,” “Make in India,” and “Clean Ganga.”
He has demonstrated a strong desire to enhance ties with neighbors and to improve bilateral relations with other countries around the world.

In a survey conducted by India Today magazine in 2007, he was elected the best Chief Minister in the country. In 2009, FDi magazine honored him with the Asian Winner of the ‘FDi Personality of the Year’ award. He was featured on the cover of TIME’s Asian edition in March 2012.
He was placed #15 on Forbes magazine’s ‘World’s Most Powerful People’ list in 2014.
In 2014, Time magazine named him one of the “Time 100 most influential persons in the world.”
On Time magazine’s 2015 list of the “30 most influential persons on the internet,” he was ranked the second most-followed politician on Twitter and Facebook.

According to the Ghanchi community’s traditions, Narendra Modi married Jashodaben Chimanlal when he was 18 years old. According to rumors, the marriage was never completed and the couple later divorced. His wife worked as a teacher in a Gujarat government school. She is no longer employed.
Narendra Modi is the youngest of five siblings, with four brothers and one sister. He is the third of six children born to his parents. Soma Modi, his elder brother, is currently retired and works as a social worker. Amrutbhai Modi, his other older brother, worked as a fitter at a private company and is now retired.
Prahladbhai Modi, his younger brother, runs a low-cost store. Pankajbhai Modi, his younger brother, works as a clerk in the Gujarat Government’s Information Department. Vasantiben Hasmukhlal Modi is his younger sister.

His total assets, according to an affidavit filed with the electoral commission in 2014, are Rs 1.51 crore.