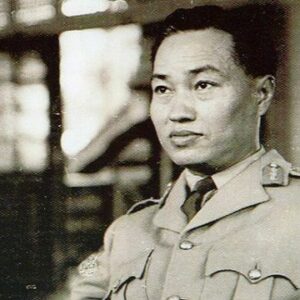 Ne Win was a Burmese politician and military officer who began his political career as a member of the ‘Dobama Asiayone’ organization. He later co-founded the ‘Burma Independence Army’ with his comrades. He quickly assumed command of the Burmese army, and at the age of forty-eight, this leader was appointed Burma’s second Prime Minister. Though his term was brief, this general’s political ambition drove him to lead a military coup against the ruling regime. He was successful in his attempt and established martial law in Burma, ruling the country for nineteen years as a dictator. During this time period, he instituted a number of reforms addressing peasant rights, illiteracy, and medical care. However, the majority of his reign was marked by economic distress, social injustice, and political upheaval. His policies against foreign trade, foreign nationals, and the implementation of new currency regulations were unpopular with the majority of citizens, sparking several instances of mutiny. In 1981, he resigned and General San Yu was appointed president, but he retained control over the military for the next seven years. When his son-in-law plotted against the ruling government, this former ruler was placed under house arrest and eventually stripped of all authority.

According to writer Kyaw Nyein’s Burmese book ‘The Thirty Comrades,’ Ne Win was born as Shu Maung in the village of Paungdale, Burma in 1910. Nevertheless, according to other sources, such as author Dr. Maung Maung’s book ‘Burma and General Ne Win,’ the Burmese Prime Minister was born the following year.

In 1929, the young boy enrolled at ‘Rangoon University,’ where he majored in biology. He was forced to leave college after two years due to his failure to pass a test.

He quickly joined the ‘Dobama Asiayone,’ a group dedicated to Burman supremacy as a country. Shu Maung and 29 other young men were chosen for military training in 1941.

Shu co-founded the ‘Burma Independence Army’ with revolutionary Aung San under the umbrella of the organization, after which he changed his name to Bo Ne Win.

In 1949, he was appointed ‘Chief of Staff of the Armed Forces,’ and oversaw several changes to the army’s structure.

In 1958, he succeeded Burmese leader U Nu as Prime Minister of Burma, but resigned two years later when U Nu reclaimed his position.

On March 2, 1962, Ne Win was involved in a military coup that deposed the Burmese government. The military leader assumed control of the country and abolished both the legislature and the constitution, claiming that “parliamentary democracy was unsuitable for Burma.”

On July 13, the same year, the Burmese general traveled to the United Kingdom, Austria, and Switzerland, claiming to require medical attention.

He declared in 1963 that the 50 and 100 Myanmar Kyat notes had become obsolete and would no longer be accepted. This resulted in many families losing all their savings in a single night. Burma’s Kayan tribe regarded this as an unjust rule and revolted against Win’s government.

In February of the same year, he introduced the ‘Enterprise Nationalization Law,’ which prohibited the establishment of new industries and converted all existing ones into government enterprises. Additionally, this law prohibited Chinese and other foreigners from conducting business in Burma, forcing many residents to seek asylum in other countries.

Special emphasis was placed on medical facilities during this time period, as government hospitals were constructed to provide free health care. In 1965, measures were taken to address illiteracy, particularly among the poor, and laws abolishing land rent empowered farmers.

Burma’s economy was isolated from the rest of the world, and international trade was prohibited. This resulted in a flourishing market for smuggled goods and an unprecedented increase in their prices. The government was reduced to poverty, and the masses’ living conditions deteriorated further.

Even though he was Chinese himself, Ne Win ensured that conditions for Chinese citizens were made intolerable. In 1967, the situation deteriorated to the point where Chinese schools and their students were set on fire, businesses were raided, and riots broke out.

Burma’s leader dissolved the Revolutionary Council and declared the country a ‘Socialist Republic’ on 2 March 1974.

In June of the same year, several factory workers and students in Rangoon’s ‘Thamaing Textile Factory’ and ‘Sinmalaik Dock Yard’ mutinied against the government’s oppressive rule. Ne Win was on his way to Australia, but a large number of demonstrators were shot at the two locations.

On November 9, 1981, the oppressive leader resigned as Burmese president, and General San Yu was elected President. However, this was a tactical move on the part of General Ne, as he retained his position as chairman of his political party and thus retained sole authority in the country.

In 1982, the Burmese dictator passed the ‘Citizenship Law,’ which barred the Burmese Chinese population from obtaining citizenship. Discrimination became widespread to the point where Chinese were denied admission to institutions teaching respectable subjects such as engineering, medicine, and economics.

In 1987, the Burmese economy faced another crisis when Ne issued currency in denominations 45 and 90 on the advice of his astrologer (both multiples of 9). Prior currencies were declared illegal, and individuals were forced to surrender their hard-earned savings.

On July 23, 1988, in the face of mounting protests, the political leader resigned from the party. Two major revolts against the ‘Burma Socialist Programme Party’ occurred over the next two months, which became known as the ‘Four Eights Uprising’.

Despite the fact that the political leader was no longer in power, he retained influence over the military-ruled nation until 1998.

In 2002, Aye Zaw Win, the son-in-law of the Burmese dictator, was convicted of plotting to overthrow the government. As a result, Aye Zaw was sentenced to death, while Ne Win and his daughter Sandar Win were confined to their homes.

General Ne Win served as interim Prime Minister but was catapulted to power in 1963 after orchestrating a coup and overturning the existing government in order to seize supreme control of the country.

While he implemented some reforms aimed at eradicating poverty and illiteracy, his strategy of isolating Burma from foreign investment in order to increase opportunities for indigenous people backfired, as it resulted in a loss of cash inflow for the government treasury.

The Burmese leader married Daw Than Nyunt first, and the couple had a son, Kyaw Thein. Later in life, he married Tin Tin, with whom he had two sons: Aye Aung and Ngwe Soe.

He married Khin May Than for the third time, who already had three daughters from a previous marriage. Sandar Win, Kye Mon Win, and Phyo Wai Win were the children of Ne and Khin. Khin May was adored by the politician, and her death in 1972 was traumatic for the leader.

General Win died on December 5, 2002, while detained at his home in present-day Yangon, Burma’s former capital. There was no state funeral, and his daughter Sandar Win later scattered his ashes in the Yangon River.

Two books have been written about this infamous dictator: Dr Maung Maung’s ‘Burma and General Ne Win’ and Kyaw Nyein’s ‘The Thirty Comrades’.

This Burmese President was a devout follower of numerology and occult practices, frequently acting on the advice of his fortune teller. He was rumored to have stood in front of a mirror, stamped on a piece of meat, and shot his own reflection in order to ward off assassination attempts.