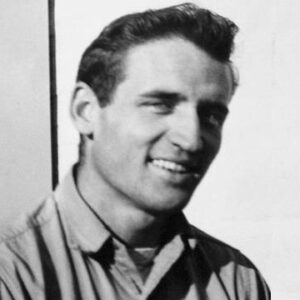 Neal Cassady was a prominent figure in the post-1945 literary movement known as the ‘Beat Generation.’ He had a difficult childhood after his mother died when he was ten, leaving him in the care of his alcoholic father. His early adolescent years were fraught with arrests for a variety of petty thefts, which ultimately resulted in his imprisonment. Cassady moved to New York following his release from prison, where he met members of the ‘Beat Generation,’ including Jack Kerouac and Allen Ginsberg. Though Cassady did not pursue a writing profession, his crazy lifestyle, magnetic energy, and high spirit influenced a large number of his writer pals. The novel ‘On the Road’ by Jack Kerouac is inspired by his travels and has a character modeled after him. Numerous literary works, films, and musical compositions have been inspired by his life. Regrettably, he succumbed to drug usage and led a careless lifestyle. Cassady’s twisted soul made it difficult for him to fulfill family commitments due to his sexual escapades, drug preoccupation, and hedonistic lifestyle.

He was born Neal Leon Cassady in Salt Lake City, Utah on February 8, 1926. His early life was terrible since he lost his mother Maude Jean when he was ten years old. He was left in the care of his alcoholic father, Neal-Marshall Cassady, following the death of his mother.

He spent the majority of his formative years on the streets of Skid row, a run-down neighborhood in Denver, Colorado. These were difficult years, and he became involved in numerous little crimes.
He was arrested for auto theft at the age of fourteen. He was later apprehended for shoplifting, fencing, and other misdemeanor offenses.

He came to the attention of a teacher named Justin W. Brierly in 1941 when he was 15 years old. Brierly quickly became his mentor and helped him gain admission to East High School.
Despite Justin W. Brierly’s mentoring, he maintained his renowned lifestyle and was jailed. He was imprisoned for eleven months in 1944. He wrote letters to Brierly during this time period.

He and his wife, LuAnne Henderson, relocated to New York City in 1947. At Columbia University, he met writers Jack Kerouac and Allen Ginsberg through his tutor and friend Hal Chase.

In the 1940s, he co-authored the poem ‘Pull My Daisy’ with Allen Ginsberg and Jack Kerouac. This was also adapted into a short film of the same name, which was inspired by a true story.
He became good friends with writers Jack Kerouac and Allen Ginsberg, as well as their friends. He quickly became a member of the ‘Beat Generation,’ a group of writers who rose to prominence following World War II.

In October 1945, he married fifteen-year-old LuAnne Henderson. In 1948, their marriage was declared null and void.
He married Carolyn Cassady in 1948 and had three children with her. They eventually made their way to Monte Sereno, California.

In 1950, he married Diane Hansen in a bigamous marriage. Curtis was their son.
He was sexually involved with his friend, the writer Allen Ginsberg. This romance lasted two decades.

In 1958, he was busted for marijuana possession in a San Francisco nightclub. He received a two-year term at San Quentin State Prison. He struggled to care for his family after he was released from prison.

Carolyn Cassady divorced him in 1963 after his parole expired. He then cohabitated with Allen Ginsberg and Charles Plymell at an apartment.

He joined the group ‘Merry Pranksters in 1964, which was fairly open regarding the usage of psychedelic drugs.
In 1964, he was also one of the drivers of the renowned ‘Furthur’ bus, which featured an onboard stove, refrigerator, and bedrooms. The bus was driven across the United States of America.

He began traveling to Mexico in 1967. He returned to Mexico the following year after visiting several places in America, including San Francisco, New York, and Denver, Colorado.
He went for a walk beside a railroad track in Guanajuato, Mexico, on February 3, 1968, following a wedding party, but passed out due to the harsh weather conditions. The following morning, he was discovered in a coma and died a few hours later.

Ken Kesey’s short novel ‘The Day After Superman Died’ gave a fictional account of his demise.
His autobiographical work, ‘The First Third,’ was released posthumously in 1971.
The novel ‘On the Road’ by author Jack Kerouac was inspired by his travels, and a character in the novel is partially based on him.

Numerous compositions of music make reference to him. Among the songs about him are The Grateful Dead’s ‘That’s It For The Other One,’ Aztec Two Step’s ‘The Persecution & Restoration of Dean Moriarty (On The Road),’ and the Washington Squares’ ‘Neal Cassady.’

He has appeared in films such as ‘Heart Beat’, ‘Who’ll Stop The Rain’, ‘The Last Time I Committed Suicide’, ‘Luz Del Mundo’, ‘Neal Cassady’, ‘Howl’, ‘Across the Universe, and ‘Love Always, Carolyn – A film about Kerouac, Cassady, and Me’.

Neal is one of the wealthiest novelists and is ranked as one of the most popular novelists. Neal Cassady’s net worth is estimated to be $2 million, based on our analysis of Wikipedia, Forbes, and Business Insider.

This writer and poet from the ‘Beat Generation’ of the 1950s were notorious for his unfaithfulness. He is said to have cheated on multiple ladies on the same day. He was also bisexual and had a bigamous marriage with two women.