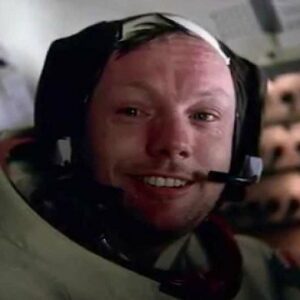 Neil Armstrong was the first person to walk on the Moon, and he was an American astronaut. He was a test pilot before being chosen as an astronaut, and he was trained as an aeronautical engineer. All of Armstrong’s achievements would not have occurred if Dick Day had not placed his astronaut application with others that came on time; Armstrong’s application arrived roughly a week after the deadline. Armstrong’s first space mission, as command pilot of Gemini 8, took place in 1966. He became the first citizen to fly in space as a result of this. Three years later, in 1969, he accompanied Aldrin and Collins aboard Apollo 11, NASA’s first manned trip to the moon, for his second and final space flight. Armstrong walked on the moon for nearly two hours, gathering samples and conducting experiments. He was a man of nobility and honor because of his fierce determination, heroic demeanor, and unshakeable team spirit. Scroll down to learn more about his life and background.

Neil Armstrong was born in Wapakoneta, Ohio, on August 5, 1930. Stephen Koenig Armstrong and Viola Louise’s eldest child was him. June, his younger sister, and Dean, his younger brother, were his siblings. Because his father worked for the government as an auditor, he spent a lot of his childhood traveling from one location to the next.
When his father took him to the Cleveland Air Races, he developed an early interest in flying. At the time, he was only two years old. He took his first airplane flight when he was five years old. Neil’s mind was forever changed as a result of this.

He went to Wapakoneta, Ohio’s Blume High School. He also took flying lessons and received his student light certificate when he was 16 years old. He was an avid Boy Scout who quickly rose through the ranks to become an Eagle Scout.

He began studying aviation engineering at Purdue University in 1947. He was sponsored by the Holloway Plan, which required him to serve in the United States Navy for three years.
In 1949, after completing his engineering degree, he was drafted into the Navy and assigned to Naval Air Station Pensacola for pilot training. In August 1950, he qualified as a navy aviator after nearly 18 months of intense training.
After completing a few regular duties, he flew as an escort for a photo reconnaissance plane over Songjin for the first time in the Korean War in August 1951.

He flew 78 flights over Korea for a total of 121 hours throughout his three years in the US Navy. He left the Navy on August 23, 1952, and joined the United States Naval Reserve as a Lieutenant, Junior Grade, where he served for eight years before quitting in 1960.

In 1955, he re-entered university and graduated with a bachelor’s degree. He also graduated from the University of Southern California with a Master of Science degree in Aerospace Engineering in 1970.

He applied for the National Advisory Committee for Aeronautics in 1955, hoping to become an experimental research test pilot (NACA). His application was routed to the Lewis Flight Propulsion Laboratory in Cleveland, where he began working, due to a lack of unfilled vacancies.
After a few months, he returned to NACA. His initial mission was to fly chase planes during experimental aircraft releases from modified bombers.

He worked for the National Aeronautics and Space Administration NASA (previously known as NACA) for seventeen years, serving as an engineer, test pilot, astronaut, and administrator among other things.
He tested a variety of high-speed aircraft as a research pilot, including the X-15, which could achieve a top speed of 4,000 miles per hour. He flew over 200 different aircraft models, including jets, rockets, helicopters, and gliders.
In the year 1958, he was chosen for the US Air Force’s Man In Space Soonest program. He was appointed as part of the X-20 Dyna-Soar pilot consultant group two years later. He finally made it into the top seven pilot engineers for space planes in 1962.

He was the first person from the United States to journey into space. On March 16, 1966, he flew his maiden mission aboard the Gemini VII as Command Pilot. The spacecraft was supposed to stay for 75 hours and 55 orbits, however it returned 11 hours after it started owing to technical issues.
His most recent job for the Gemini program was as a back-up Command Pilot for Gemini 11. Armstrong was to be the CAPCOM for the launch on September 12, 1966.

He was appointed to the position of commander for Apollo 11 on December 23, 1968. Buzz Aldrin piloted the lunar module, and Michael Collins piloted the command module.
On July 20, 1969, at 20:17:40 UTC, the trio successfully landed on the moon. Armstrong was the first person to set foot on the Moon. ‘That’s one tiny stride for a man, one huge leap for mankind,’ he said first.

He re-entered the spaceship and returned to Earth after a brief walk on the Moon that lasted around two hours. They were picked up by the USS Hornet after landing in the Pacific Ocean.
After spending 18 days in quarantine, he and his crew embarked on a 45-day ‘Giant Leap’ journey around the world. He announced his intention to not fly in space again after the Apollo 11 mission.

He was named Deputy Associate Administrator for Aeronautics for the Office of Advanced Research and Technology, Advanced Research Projects Agency (ARPA) in 1970, but only served for a year before leaving from both the agency and NASA. He began teaching at the Department of Aerospace Engineering at the University of Cincinnati. He was in charge for almost eight years before retiring in 1979.

Meanwhile, he worked as a spokesperson for a number of companies in the United States, including General Time Corporation and the Bankers Association of America. He has served on the boards of directors of Marathon Oil, Learjet, Cinergy, Taft Broadcasting, United Airlines, Eaton Corporation, AIL Systems, and Thiokol, among others.

He became NASA’s first citizen astronaut when he was appointed as an astronaut. The Apollo 11 mission, which was the first manned mission to the Moon, was, however, the most remarkable feat of his life. He was the first man to walk on the Moon’s surface, and his stroll lasted just over two hours.

He was inducted into the United States Astronaut Hall of Fame and the Aerospace Walk of Honor.
He has an asteroid named after him as well as a lunar crater. In addition, he has had various schools, organizations, roadways, buildings, airports, and public squares named after him around the world.
The Space Foundation presented him with the General James E. Hill Lifetime Space Achievement Award in 2013.

On January 28, 1956, in the Congregational Church in Wilmette, Illinois, he married Janet Elizabeth Shearon. Three children were born to the couple.
On August 7, 2012, he underwent bypass surgery to clear clogged coronary arteries. He passed away a few days later, on August 25.

He is the first person to walk on the Moon’s surface.