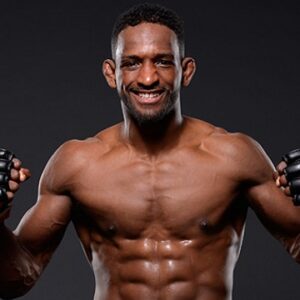 Neil Magny is an American mixed martial artist (MMA) who currently fights in the Ultimate Fighting Championship’s welterweight division (UFC). Neil Magny, who was born and raised in Brooklyn, New York, is one of the most well-known UFC fighters. Neil had no intention of becoming a professional MMA fighter while in college, since he was studying to be a criminal lawyer, but something about the sport drew him in and he went all out to pursue his dreams. He had nothing to be ashamed of since he began his career with a string of successes in various promotions. Later in his career, his developing reputation as a talented MMA fighter led him to the UFC, where he made his debut against Jon Manley in February 2013. Neil’s profession has had many ups and downs over the years, but his inner fortitude, which he inherited from a challenging upbringing, has kept him going through the terrible times. His three ‘Performance of the Night’ bonuses and one ‘Fight of the Night’ bonus award speak volumes about his ability. In the UFC Welterweight category, he is currently ranked #8.

Neil Magny was born on August 3, 1987, in Brooklyn, New York, to a humble family. He still believes that the challenging neighborhood in which he grew up had a profound effect on his mental health. He wanted to be stronger, so he enrolled in physical training programs at a young age.

His family life was filled with uncertainty because he spent the majority of his childhood moving apartments with his mother when he was approximately 15 years old. He wanted to be a football player in high school until he saw some of his buddies practicing for MMA, which piqued his interest in the sport.

Magny graduated from Thornwood High School and had no idea what he wanted to do with his life until then. He ultimately met Miguel Torres, a coach who spotted in him a strong drive to succeed in the sport. Magny was subsequently encouraged to join a few of the coach’s mixed martial arts courses, and when he did, he discovered his calling.

Unfortunately, fate had other plans for Magny and he wasn’t able to do what he really wanted. Due to family problems, he was obliged to join the army in order to provide for his family.

He served in the National Guard as a Sergeant for seven years after high school, but he never stopped dreaming about MMA. He watched MMA bouts on TV even when he was in college at South Illinois University, where he was pursuing his BA in criminal law.

He finally dropped out of school and reconnected with Torres, his first ever coach, to begin training as an MMA fighter. Finally, all of Neil’s hard work paid off, and he was poised to make his professional MMA debut in 2010.

In August 2010, he fought Nolan Norwood in a C3 organization that was somewhat unknown at the time, and Neil Magny won his first official MMA fight through submission in the second round.
The second battle came a few weeks later, and this time he was placed against Nate Pratt, who Neil defeated by an anonymous decision.

Neil was given the opportunity to compete in Cut Throat MMA a few months later, and he won there as well. After a few months, he had a 6-0 professional MMA fighting record, which was impressive for a novice.

In 2011, he was asked to fight in Combat USA’s Wisconsin vs. Illinois championship, where he made it to the finals without losing a match. However, in what was arguably his most significant match up to that point, he suffered his first loss. He was defeated in the final bout, which took place in July 2011.

Rather than being crushed by the setback, Neil began preparing for a far larger MMA event. The Ultimate Fighter, which was also a fan favorite, has paved the road for numerous fighters to realize their professional dreams of fighting in the UFC.

Neil did exceedingly well in the new ring, winning numerous matches to go to the semi-finals, when he was defeated by Mike Ricci in the third round. Despite a few of severe losses over his career, Neil had already established himself as one of the strongest fighters to be hired by the UFC rooster, and he was signed in late 2012, with his first fight slated for February 23, 2013, against Jon Manley.

Neil won his first UFC battle by unanimous decision, signaling a triumphant return to the sport. However, the celebrations were short-lived, as his second bout ended in a humiliating loss. Sergio Moraes, Neil’s opponent, defeated him in the first round with a triangle choke.

Neil put up a valiant battle against Seth Baczynski in November 2013, but the fight ended in a draw. This was Neil’s second consecutive loss, and he began focusing more on his talents as he prepared for his next fight, which was slated for February 2014.

All of Neil’s hard work and preparation paid off, as he made a strong comeback and defeated Gasan Umalatov by anonymous decision. Neil won his next two fights as well, both against replacement opponents who were inexperienced and weak.

In a November 2015 contest, Neil fought Kelvin Gastelum as a replacement, and the fight was so intense that it had the spectators on the tip of their seats and awarded both combatants a ‘Fight of the Night’ award. Neil was awarded a split decision victory in the fight.

In March 2016, he stepped into the ring for the most devastating battle of his career. Hector Lombard, Neil’s opponent, hammered him with blows after punches in the opening round, and it was a foregone conclusion that he would win. Neil, on the other hand, made a strong comeback and won by TKO in the third round, earning him yet another ‘Performance of the Night’ award. Neil’s contract with the UFC was extended for another four fights after this fight.

Neil’s record in his next two fights was one victory and one loss, as he lost in the first round to Dong Hyun Kim, but won a fight against Johnny Hendricks in December 2016.

Neil Magny has been seeing Emily Steiner for a while now, but little is known about his personal life because he has managed to keep it discreet.

Neil and his mum are quite close. He observed his mother moving residences constantly during his childhood, so he presented her a mansion, which he considers to be the finest thing he has ever done!

Neil Magny’s net worth is believed to be at $1.5 million. During his fight nights, he gets a lot of money from sponsorships and promos. From a high-stakes battle with Santiago Ponzinibbio, he earned $89,000. He gets roughly $70,000 each fight on average.