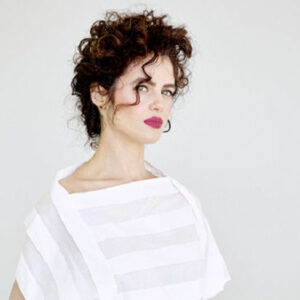 Neri Oxman is an American-Israeli architect, designer, and educator who holds the positions of Associate Professor of Media Arts and Sciences at the MIT Media Lab and Sony Corporation Career Development Professor. She established and is the leader of the research team “Mediated Matter.” Her work spans disciplines, media, and scales and is distinguished by its integration of “computational design, digital fabrication, materials science, and synthetic biology.” The phrase “material ecology,” which “considers computation, manufacture, and the material itself as interdependent elements of design,” is credited to her as its originator. She has led the way in the emerging industry by developing structures and goods that are “biologically informed and digitally engineered by, with, and for Nature.” She is most known for her “Silk Pavilion,” “Imaginary Beings,” “Ocean Pavilion,” “Gemini,” “Synthetic Apiary,” and “Wanderers” collection, among other famous works. Her team created the first 3D printer that can print transparent glass, known as “G3DP.” She has received numerous honors throughout the years for her creative contributions to the field of architecture, including the “Earth Award” and the “Vilcek Prize.” Additionally, she has appeared on the covers of publications like “Fast Company,” “Wired UK,” “ICON,” and “Surface.”

Robert and Rivka Oxman’s son Neri was born in Haifa, Israel, in 1976. He has two architects for his parents. She learned to mix nature and civilization while spending most of her youth rotating between her grandmother’s garden and her parents’ architecture office.

She moved to Jerusalem and enrolled at the Hadassah Medical School at Hebrew University in 1997. She made the decision to enroll in an architecture study at Technion, an Israeli institute of technology, two years later.

She then enrolled in the London Architectural Association School of Architecture, where she eventually earned a master’s degree in 2004 with a thesis on the use of “structural, spatial, and environmental” clues to generate shapes. She moved to Boston in 2005, enrolled in the architecture PhD program at MIT with William J. Mitchell as her advisor, and produced a thesis on material-aware design.

Neri Oxman joined the MIT Media Lab as an Associate Professor of Media Arts and Sciences in 2010 after receiving her Ph.D. from the university. She also holds the title of Sony Corporation Career Development Professor at this time. She later established the Mediated Matter research group at MIT, where she currently serves as director.

She then concentrated on utilizing various 3D printing methods, frequently working with printing businesses like Stratasys. The Mediated Matter team has created specialized printers, including a prototype that can construct free-standing items devoid of supports and buildings up to 8 feet tall in outdoor settings.

Her first 3D-printed body-sized wearable collection, dubbed “Imaginary Beings,” which was inspired by mythical creatures, was one of her first efforts in 2012. She then collaborated with materials engineer Craig Carter and fashion designer Iris van Herpen to 3D-print the “Anthozoa” dress, which features a variety of colors and materials.

One of her most well-known creations, the “Silk Pavilion,” a polyhedral nylon-frame dome that was loosely woven by a robotic arm and subsequently completed by 6,500 free-ranging silkworms, was started in 2013. The goal of the experiment was to learn how silkworms react to various surfaces and how to get them to spin onto something already there rather than into a cocoon.

In her 2014 piece titled “Ocean Pavilion,” structures made of chitosan, an organic fiber that resembles chitin and is water soluble, were erected on a platform that was submerged in water. The final product was a combination of hard and soft structures, despite the fact that the underlying material for the entire construction was the same.

In 2015, she created the room-sized installation “Synthetic Apiary” to research how bees behave indoors and how they construct beehives in and around various structures. She worked with a beekeeping business on this project to investigate how biological niches could be incorporated into structures to prevent colony loss.

Together with Christoph Bader and Dominik Kolb, she developed the “Wanderers” collection in 2015, a line of 3D-printed wearable skins intended to enable people to survive on other worlds. The “Living Mushtari” chest-piece, which was made of a liquid-filled synthetic digestive system populated by a colony of photosynthetic bacteria and E. Coli, was the one item that attracted the most media interest.

The SF MoMA later purchased her 2015 chaise lounge “Gemini,” which had a milled wood shell with a 3D-printed surface and was intended to create a calming acoustical environment for the chair. In the same year, in partnership with MIT’s Glass Lab and the Wyss Institute, her team created “G3DP,” the first 3D printer able to manufacture optically transparent glass.

She gave a TED talk in October 2015 titled “Design at the Intersection of Technology and Biology,” which has received over 162,000 views on YouTube as of this writing. She spoke about her goal of achieving “symbiosis between our bodies, the microbes that we inhabit, our products, and even our structures” through the application of scientific knowledge and material ecology.

In 2016, she produced a group of 15 death masks called “Vespers” which were influenced by the movie “Alien.” Rottlace was a series of 3D-printed feathered, filamented, and textured masks she made for the artist Björk. She displayed a collection of G3DP-made glass vessels at a number of museums in June and created the 10-foot-tall ‘YET’ sculpture out of light- and printed glass for the 2017 Milan Design Week.

Neri Oxman earned the International Earth Awards for Future-Crucial Design, the HOLCIM Next Generation award for Sustainable Construction, and the Graham Foundation Carter Manny Award in 2008. She was also recognized as a “Revolutionary Mind” by SEED Magazine in that same year.
In 2009, “Esquire” magazine named her one of the “Best and Brightest” and presented her with a “METROPOLIS Next Generation” award.

In 2014, she received the Vilcek Prize in Design, the Carnegie Pride of America Award, and the BSA Women in Design Award.

She was given the “Innovation by Design award” by Fast Company and the Architectural League of New York’s “Emerging Voices” award in 2015. She most recently received the 2017 “Visionary Award” from the San Jose Forum.

In 2011, Grammy Award-winning Argentine composer Osvaldo Golijov and Neri Oxman got married. In an interview with “Surface magazine,” Golijov claimed to have had “great influence” on Oxman’s creative output. Even though the specifics of their divorce haven’t been made public, the pair have since separated.
Early in April 2018, “Page Six” revealed that she had met famed Hollywood actor Brad Pitt through an architecture project at MIT and was now spending time with him. They apparently became friends because of their shared love of art, architecture, and design, despite the fact that the source said they were just friends at the time.

She was happy in her current relationship after the connection with Pitt made it known that she was actually seeing hedge fund manager and billionaire Bill Ackman.

One of the wealthiest and most well-known architects is Neri Oxman. Our research of Neri Oxman’s net worth from Forbes, Wikipedia, and Business Insider revealed a $5 million figure.

Neri Oxman got countless notes pushing her “to move forward with the same thought and intensity” following the passing of Zaha Hadid, another trailblazing woman in the predominately male sector of architecture.