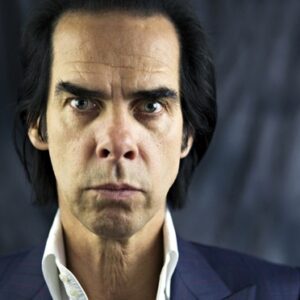 Nick Cave is noted for bringing a sense of humour and raw emotion to the ‘Rock’ genre. His band, ‘Boys Next Door,’ was obsessed with Goth, religion, death, violence, and love, all of which were important themes in another of his bands, ‘Nick Cave and the Bad Seeds.’ Most of his paintings portray the ostensible impact of religion that has loomed over him like a shadow for the most of his life, having been raised as a devout Anglican. Nick’s journey as a musician and songwriter, from ‘Boys Next Door’ to ‘The Birthday Party’ and ‘Bad Seeds,’ was one of incredible perseverance and unwavering faith in his own abilities. His music continues to enchant audiences and resonate in the halls of ‘rock’ even now, as he was considered one of the ‘bad boys’ of music in the twentieth century. He formed the garage rock band ‘Grinderman’ in the new millennium, which became noted for its characteristic portrayal of raw, emotive intensity and thought-provoking lyrics. He is remembered as one of the key songwriters of the post-punk era, whose murky sound was reinforced by an amalgam of blues, rock, and gospel. Aside from music, he published the books ‘King Ink’ and ‘King Ink II,’ and appeared in films such as ‘Wings of Desire’ and ‘Johnny Suede.’

Nicholas Edward ‘Nick’ Cave was born in Warracknabeal, Australia, on September 22, 1957, to Colin Frank Cave and Dawn Treadwell. He has a sister and two brothers. The family lived in Wangaratta during their early years.
His family reared him as an Anglican and instilled in him the value of reading from an early age. He was a troubled adolescent who was sent to Caulfield Grammar School, a boarding school.

When his family moved to Murrumbeena, he became a day-scholar. His father’s sad death in a vehicle accident altered his outlook on life, creating a ‘void’ in his existence.

He went to Caulfield Institute of Technology after high school to study painting, but dropped out in 1977 to pursue music professionally. He also started using narcotics about this period.

He met Mick Harvey, Brett Purcell, Phill Calvert, Chris Coyne, and John Cochivera during his high school years, and they established the band ‘The Boys Next Door’ in 1977, which eventually became known as ‘The Birthday Party.’
Rowland S. Howard, a guitarist and lyricist, joined the band in 1978. Their music had gothic overtones and was often based on themes of curses, turpitudes, and damnation.

When Cave became tired of this subject, he released the single ‘Release the Bats’ in 1981, which was a comedic parody of the ‘dark’ theme that they had relied on for so long. Nick Cave and the Bad Seeds, an alternative rock band with him on lead vocals, was established two years later.

In 1984, ‘The Birthday Party’ disbanded. Two of his songs were utilized in the film ‘Wings of Desire,’ which was released three years later, during this time. The band ‘Nick Cave and the Bad Seeds’ also made a cameo appearance in the movie.

He published his debut book, ‘King Ink,’ in 1988, which is an anthology of plays, lyrics, and collaborations with Lydia Lunch. The next year, he published ‘And the Ass Saw the Angel,’ his second novel.

In addition to his work with the band, he also performed solo as a vocalist and pianist during the 1990s. In 1991, he starred alongside Brad Pitt in the film ‘Johnny Suede.’

His songs have also been featured in films such as ‘Batman Forever,’ ‘The X-Files,’ ‘Dumb and Dumber,’ ‘Scream’ and its sequels, and ‘Hellboy.’

He published his album ‘Murder Ballads’ in 1996, which included the smash ballad ‘Where the Wild Roses Grow.’
In 2001, he recorded a copy of ‘The Beatles’ song ‘Let it be’ for the film ‘I Am Sam,’ as well as the song ‘To Be By Your Side,’ for the documentary ‘Le Peuple Migrateur.’

He authored the screenplay for ‘The Proposition’ in 2004, which was released the following year. He starred in the film adaption of “The Assassination of Jesse James by the Coward Robert Ford” two years later.

In 2007, he launched the side project ‘Grinderman’ and released their debut self-titled album, ‘Grinderman.’ With his band, ‘Nick Cave and the Bad Seeds,’ he published ‘Dig, Lazarus, Dig!!!’ the following year.
‘The Death of Bunny Munro,’ his next novel, was released on September 8, 2009, and is based on the life of a sex-addict salesman.

In 2011, Cave and Ellis composed music for the Mexican film ‘Dias de Gracias.’ They also composed the score for ‘Lawless,’ which was released the next year all over the world.
‘Nick Cave and the Bad Seeds’ released their studio album ‘Push the Sky Away’ on February 18, 2013 all over the world. The singles ‘We No Who U R,’ ‘Mermaids,’ and ‘Jubilee Street’ are included.

Major Works ‘Murder Ballads,’ published by ‘Nick Cave and the Bad Seeds’ in 1996, is widely regarded as one of the band’s best albums to date. The album features alternative rock ballads and was nominated for two prestigious ARIA Awards the year it was released. This album was their most commercially successful to date, and Cave was nominated for a Grammy Award for “best male performer” that year.

For ‘And the Ass Saw the Angel,’ Cave received the ‘Book of the Year’ award from Time Out Magazine in 1990.
He was named APRA Music Award’s ‘Best Songwriter of the Year’ in 1997.

During the Venice Film Festival in 2006, he won the Gucci Award for the script for the film ‘The Proposition.’
In 2007, he was honored into the ARIA Hall of Fame.

From the 1970s to the 1980s, he was in a love relationship with Anita Lane.
In 1991, he had a son with Viviane Carneiro. After six years of marriage, he filed for divorce in 1996. In the meantime, he fathered an illegitimate son named Jethro, who was born to Beau Lazenby in 1991.
Before meeting Susie Bick in 1997, he dated P J Harvey. In 1999, he married Bick. Arthur and Earl, the couple’s twin boys, were born to them. He currently resides in the English city of Brighton.

Nick Cave has an estimated net worth of $8 million dollars. He is an Australian musician, novelist, director, performer, and composer. Nick Cave was born in Warracknabeal, Victoria, Australia, and as a child, he got into a lot of mischief, so his parents sent him to boarding school. He was a member of the choir throughout high school and went on to study painting at Caulfield Institute of Technology.

Howard Arkley is responsible for one of the most well-known portraits of this well-known Australian musician. The portrait is now on display at the National Portrait Gallery.