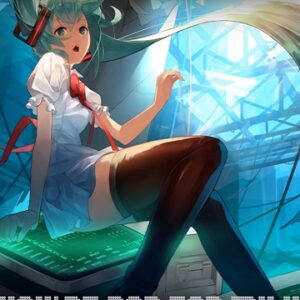 For those unfamiliar with Nightcore, it is a form of music that has an increased tempo or pitch, as well as an amplified bass type, to give the song an upbeat mood. And anyone who hasn’t heard of Danika or NightcoreReality, to be more specific, is missing out on a lot! Danika’s incredible musical ability will hook you in no time! Danika became inspired to produce her own music after being dissatisfied with the low quality of the remixes she found on the internet. This young adult may have entered social media without realizing how much attention her videos would receive, but we’re glad she did! NightcoreReality has now gotten ‘YouTube’ all worked up about how unique and amazing each of her videos is. If you still don’t believe us, let the incredible NightcoreReality’s soundtrack transport you to another world!

Danika was one of the few YouTubers that started a channel only for the purpose of maintaining her privacy, rather than to get subscribers or views. Danika, who is a Nightcore enthusiast, wasn’t always impressed with the other music remixes she saw online. This inspired her to create her own Nightcore music videos, as well as add lyrics to all of the songs she shared. Danika had no idea that her Nightcore compilations would garner such a large response once she had posted them.

Her passion for creating inventive films and editing them in a professional manner propelled her channel to stardom in a matter of years. This YouTube performer has over 2 million subscribers and over 1 billion views on her channel ‘NightcoreReality,’ which she started in 2013. Her channel is also known for the high-quality Nightcore videos she produces. Her video, ‘Nightcore-This Little Girl,’ has had over 24 million views, and viewers have praised her editing talents and the video’s overall quality in the comments area.

Danika has also started a new channel called ‘CrackReality,’ where she publishes non-Nightcore films and reveals her true nature. ‘CrackReality’ provides videos such as Q&As, podcasts, and convention vlogs. The station also has programming that caters to anime fans and strives to keep them entertained. She also appears on an anime panel, where she answers questions and even discusses her favorite anime of the year. She’s also shown off her more intimate side by giving a tour of her room and filming her journey to Kumoricon.

You can’t get enough of Danika’s subtle-yet-great sense of humor when you listen to her talks with other notable anime-related YouTubers. She enjoys laughing and can even tell a few jokes about herself! Danika is currently cooperating on ‘YouTube’ with other famous Nightcore musicians, with typical videos lasting up to 30 minutes and containing at least two to three songs.

Danika was born in Seattle, Washington, on November 16, 1995. Except for the fact that she was reared alongside a brother, there isn’t much information about her family life that we could locate. Miss NightcoreReality is active on other social media platforms such as ‘Instagram’ and ‘Twitter’ in addition to ‘YouTube.’ On these websites, she has more than 10,000 followers.

Since then, she’s been inextricably linked to music, and the first thing she bought with her allowance was a CD player. She completed high school and enrolled in college while also launching her YouTube channel. She had no idea her channel would become so popular, but once it did, she had to balance being a full-time YouTuber and a full-time college student.

She has now secured publishing contracts and has performed in a handful of her Nightcore songs. She frequents conventions in Los Angeles and has established a few excellent pals in the Nightcore and gaming social media communities. Despite the fact that the majority of her male followers like her, she is not presently dating anyone and intends to finish college before pursuing a career in the music industry.

Nightcorereality has grown in prominence as a result of her YouTube channel. Her main source of income is as a YouTube celebrity and social media personality. The net worth is estimated to be between $100,000 and $1 million. She is most likely having a comfortable and happy life with her family.