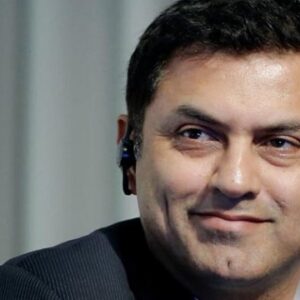 Nikesh Arora was the former President and Chief Operating Officer of SoftBank Corporation. He worked for the company from October 2014 to June 2016. He was a top executive at Google before joining SoftBank, where he held numerous senior operating leadership responsibilities. He was Google’s highest-paid executive at one point in his career, with a pay deal of $57.1 million in 2013. Over the course of two years at SoftBank, he was paid a total of $208 million, making him one of the world’s highest-paid executives. He graduated from the Indian Institute of Technology (BHU) Varanasi with a bachelor’s degree in electrical engineering and worked for Wipro for a time. After that, he moved to the United States to obtain a management degree at Northeastern University. He began his career as an analyst with Fidelity Investments while also pursuing his CFA (Chartered Financial Analyst) designation. He joined Google in the early 2000s, when it was still a pretty tiny corporation. He held a number of high operations leadership positions at Google before rising to the post of Senior Vice President and Chief Business Officer. He left Google in 2014 to become President and Chief Operating Officer of SoftBank. Many in the business world were taken aback when he abruptly resigned from SoftBank in June 2016.

Nikesh Arora was born in Ghaziabad, Uttar Pradesh, India, on February 9, 1968. He graduated from The Air Force School in Delhi, the son of an Indian Air Force officer. He only has one sibling.

In 1989, he earned a bachelor’s degree in Electrical Engineering from the Indian Institute of Technology (BHU) Varanasi. Following his graduation, he obtained a job at Wipro, but left soon after to pursue his higher studies in the United States.

He enrolled at Northeastern University in Boston, Massachusetts, and received his MBA there.

Nikesh Arora began his career as an analyst at Fidelity Investments in 1992. At the same time, he enrolled in a master’s program in finance at Boston College, where he took seminars at night. In 1995, the industrious young guy graduated first in his class and earned his CFA (Chartered Financial Analyst) designation.

He progressed through the ranks of Fidelity over the next few years, holding top financial and technology management portfolios before eventually becoming Vice President, Finance, at Fidelity Technologies.
He left Fidelity to work for Putnam Investments, but only stayed for a short time. He was soon hired by Deutsche Telekom.

In the year 2000, he founded T-Motion PLC, a firm that provides value-added services for Deutsche Telekom’s newly announced 3G services. T-Motion was merged with Deutsche Telekom as a subsidiary of T-Mobile within two years, where Arora served in numerous capacities, including as a board member.

In 2004, he was looking to start another company after being bitten by the entrepreneurial bug and learning of a tiny company looking for someone to run its European business. Google was the corporation, and it had only recently gone public.

From 2004 through 2007, Nikesh Arora was in charge of Google’s European operations. His efficiency and determination aided the corporation in expanding its impact throughout Europe, resulting in billions of dollars in revenue for Google. From 2007 to 2009, he was in charge of handling the Middle East and African markets.

In the years afterwards, Google has grown to be a hugely successful company, and Arora has grown in stature as well. From 2009 to 2010, he was President, Global Sales Operations and Business Development.

He was named Senior Vice President and Chief Business Officer of Google in 2011. He quickly rose to the position of Google’s highest-paid executive, earning $57.1 million (Rs 344 crores) in 2013.

He left Google in 2014 to join Japan’s SoftBank Corp as Vice Chairman of the Group and CEO of SoftBank Internet and Media Inc, after a decade with the company. There, he was seen as SoftBank CEO Masayoshi Son’s successor apparent.

Nikesh Arora received $208 million in pay from SoftBank over the course of his two-year tenure. He abruptly resigned from his position at SoftBank in June 2016, shocking the business world.

Nikesh Arora, who joined Google while it was still a small company, was a significant figure in the company’s sales and revenue expansion. He not only built up new advertising markets throughout the world as a top sales executive, but he also researched fresh advertising venues and supervised Google’s network of a million websites where it syndicates display ads.

He is credited with investing more than $2 billion in India’s startup sector during his time at SoftBank. Snapdeal, Housing.com, and Oyo Rooms were among his major investments.

His first marriage, to Kiran, ended in divorce, and he had a daughter with her.
In a grandiose wedding in 2014, he married entrepreneur Ayesha Thapar.
Despite his travels, he is an Indian at heart and enjoys Indian cuisine. In his spare time, he enjoys golf and is a cricket fanatic.