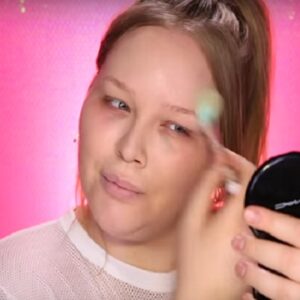 To say that Nikkie De Jager is only a skilled hair and makeup artist known for her YouTube beauty channel “NikkieTutorials” would be an understatement. Despite the fact that YouTube is flooded with beauty advice, this young Dutch beauty has amassed over 6 million subscribers by enticing viewers with her bright demeanor, vivid humor, and contagious enthusiasm. She began to appear in periodicals, TV shows, and advertisements as her fame expanded. She worked with Volkswagen in 2012 to spread the word about the risks associated with wearing makeup while driving. She was appointed chief makeup artist for Paul Fisher’s RTL5 show “I Can Make You a Supermodel” in 2013. She was given the privilege of becoming the Fashionista magazine’s June cover girl the following year. Late in 2014, a very happy Nikkie announced on all of her social media channels that the well-known singer had chosen the photo of her lips from her review of the “MAC Viva Glam Rihanna 2” set as her Twitter header. The ultimate goal for Nikkie is to develop her own distinctive, feminine-yet-edgy cosmetics look that will make her a household brand.

It might surprise you to learn that Nikkie De Jager’s fame is actually the outcome of an unanticipated event that happened back in 2008. She made the decision to watch “The Hills” on MTV on a dull day when she was ill. She began to check for YouTube videos on “The Hills Makeup” after being so mesmerized by Lauren Conrad, Heidi Montag, and Audrina Patridge’s stunning appearances on the program. It didn’t take her long to find a ton of beauty lessons on YouTube, and she spent the following three months learning more about the subject. At the age of 14, she posted her first YouTube video, and after just eight views and three comments, she was hooked on the online video platform. She began posting weekly cosmetics tutorials, and very quickly her channel “NikkieTutorials” rose to the top of the Netherlands’ beauty channels in terms of subscribers and viewers.

Why Nikkie De Jager Is So Unique?

Nikkie’s unique ability is possibly her ability to alter people’s appearances. What is more important, though, is that she gives others the tools they need to transform themselves through her lectures. In fact, Nikkie previously unintentionally rose to fame as the face of the online campaign known as “The Power of Make-up.” In order to demonstrate to her followers what cosmetics can do to a person, Nikkie posted a video on her channel with the same name. She was motivated by the fact that when she isn’t wearing makeup, people frequently fail to recognize her as the glitzy YouTube cosmetics guru. She experimented by applying makeup only to one side of her face in order to demonstrate to her audience the split look with and without makeup. In the video, she also made the point that not everyone wears cosmetics to conceal their actual selves or to be beautiful in the eyes of others. They frequently do it because it’s a creative and enjoyable activity. She wished to rid women of the shame associated with using cosmetics. A lot of young ladies were motivated by her video and message to post images of themselves on social media with only one side of their faces made up. In opposition to cosmetic shame, it quickly grew into an online movement. Soon after, Nikkie began to appear in numerous publications, and a segment of her film from the television program Good Morning America showed models with half-applied makeup.

Past Fame of Nikkie De Jager

Nikkie De Jager’s fame didn’t stop her from picking up new techniques to hone her trade. She was contacted by professional makeup artist and educator Pascale Tesser of the B Academy, Amsterdam, as she began to gain notoriety. She made the decision to enroll in Pascale Tesser’s cosmetics course in 2010, which taught her everything she needed to know about applying makeup for photo sessions and performances. She grew close to Tesser throughout her time in Amsterdam and helped her out with exhibitions and picture sessions. She joined Tesser’s “Colourfool Agency” in 2011, which gave her the chance to work on some fantastic projects including Miljoenenjacht & The Face, Hollands & Benelux’s Next Top Model, and The Face. She was sanctioned for a monthly beauty section in the teen publication Fashionista in late 2012. She has also contributed to publications like Talkies, Marie Claire, and Linda. In order to work independently as a freelance Hair & Makeup Artist, Nikkie quit Colourfool Agency in 2014.

In Wageningen, Netherlands, on March 2, 1994, Nikkie De Jager was born. Her mother also works as a beautician and owns a website. She used her mother’s digital camera to make her first YouTube video. She is associated with Rick Smit.

The net worth of Dutch makeup artist and beauty blogger Nikkie de Jager is $6 million. In March 1994, Nikkie de Jager was born in Wageningen, Netherlands. She is well-known for her NikkieTutorials YouTube channel. By 2018, she has amassed 10 million followers and more than 900 million views for her 2015 viral video “The Power of Makeup.” In 2008, Nikkie de Jager, at 14 years old, began posting films to YouTube. She went to makeup classes at the B Academy in Amsterdam and eventually became a professional makeup artist after signing with the Colourfool Agency. In 2013, she began working as the chief makeup artist on the television show I Can Make You a Supermodel. She has worked with cosmetic companies like Ofra, Too Faced, and Maybelline. In addition to winning a Teen Choice Award in 2017 for Choice Web Star: Fashion/Beauty, Nikkie de Jager earned a 9th Annual Shorty Award in 2017 for YouTube Guru.

Even though Nikkie publishes numerous cosmetic instructions around the holidays, she claims that she rarely wears makeup herself.