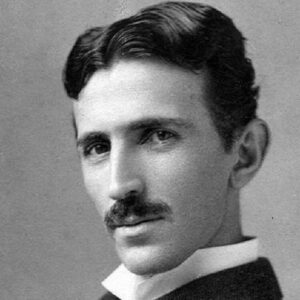 Nikola Tesla was a Serbian-American inventor who pioneered the use of alternating current electricity. In addition, he made significant advances to electromagnetism and wireless radio communications. He was a gifted child with an eidetic memory. He also had a futuristic vision for humanity, as seen by the majority of his discoveries and explorations. He was a qualified electrical and mechanical engineer who invented the modern electric motor, wireless energy transmission, basic laser, radar technology, the first neon and fluorescent illumination, and the Tesla coil, among other things (widely used in radio, television sets, and other electronic equipment). Even though he was a brilliant inventor, his life was blighted by poverty since he was a poor businessman. He was a squanderer of money and had never been in a committed relationship. Despite his friends’ praise for his generosity and politeness, he had virtually little social connection with them due to his strict daily regimen. He lived a solitary life and died poor, despite the acclaim he would get after his death. He was without a doubt one of the most influential inventors of the twentieth century, with electrical breakthroughs that were decades ahead of their time. Even now, his discoveries have an impact on technology.

He was born on July 10, 1856, in the Austrian Empire’s settlement of Smiljan, to Milutin Tesla, an orthodox priest, and his wife, uka Mandic, an innovative homemaker who built household appliances in her spare time.
His family had five children, and he was the fourth. He has an eidetic memory and a talent for electrical ideas. He always attributed his artistic ability to his mother’s genetic influence.
A primary school in Smiljan provided him with a basic education in German, arithmetic, and religion.
He enrolled at Karlovac’s ‘Higher Real Gymnasium’ in 1870 and, thanks to his exceptional intelligence, completed the four-year course in three years in 1873.
On a ‘Military Frontier’ scholarship, he attended the ‘Austrian Polytechnic’ in Graz, Austria, in 1875. In his first year, he was a good student, but in his second year, he became hooked to gambling, which wrecked his studies and prevented him from earning a degree.

In 1881, he worked as a draftsman at Budapest’s ‘Central Telegraph Office.’ Later, he became the chief electrician at the ‘Budapest Telephone Exchange,’ where he improved the Central Station’s equipment significantly.
He worked as an electrical equipment designer for the ‘Continental Edison Company’ in France in 1882. He was transferred to New York after two years to work for Thomas Edison to assist him in the redesign of direct current generators.
His suggestion of using the polyphase alternating current technology to improve Edison’s inefficient motors and generators prompted Edison to offer him a prize of $50,000 if he succeeded. He finished his assignment and requested the reward money, to which Edison responded that his challenge was simply a sort of American humour. Tesla resigned from his position on the spot.
Western Union superintendent Alfred S. Brown and attorney Charles F. Peck were fascinated by Tesla’s technology and backed him financially, forming the ‘Tesla Electric Company’ in 1887. This aided Tesla in the development of an alternating current induction motor. After that, he was able to get his work patented.
Industrialist George Westinghouse engaged him in 1888 after being intrigued by his proposal of establishing the alternating current electric supply system. He eventually won the war of currents over Edison’s DC system by exhibiting the wonders of alternating current electric equipment.
Tesla learned about electromagnetic radiation after visiting an exposition in Paris in 1889, which was proven by Heinrich Hertz. Soon after, he formed his own laboratory and began working on a number of experiments, including the ‘Tesla Coil’ and the carbon button lamp. He also experimented with electrical resonance’s power and different sorts of lighting.
From 1892 to 1894, he served as vice-president of the ‘American Institute of Electrical Engineers.’ Later, the institute merged with the ‘Institute of Radio Engineers.’
Tesla demonstrated the fully developed polyphase AC system at a Columbia fair in 1893. The demonstration was carried out by ‘Westinghouse Electric,’ a company that owned his patents.
He moved to Colorado Springs in 1899 to start a laboratory to develop a wireless global energy transmission system. In an attempt to give free wireless electricity over the world, he experimented with man-made lightning. In Wardenclyffe, near Shoreham, Long Island, he began work on establishing the trans-Atlantic wireless telecommunications facility in 1900. He conducted numerous experiments in the facility, but he was compelled to sell it around the time of World War I due to a lack of cash.
Later, he revealed a system for conveying mechanical energy over any terrestrial distance with low loss, as well as a way for precisely pinpointing the location of subsurface mineral resources.

The present alternating current (AC) electrical supply system is his most famous achievement. It outperformed Edison’s direct current (DC) technology in terms of efficiency and effectiveness.
The ‘Tesla Coil,’ a circuit that converts energy into extremely high voltage charges, creating powerful electrical fields capable of producing stunning electrical arcs, is one of his most well-known inventions.
For his enormous contributions to the invention of radio, he was called the “Father of the Radio” in 1943.
He was a pioneer in the invention of radar, X-ray, and rotating magnetic fields, which are the foundation of most AC machinery.

In his honor, the SI-derived unit of magnetic flux density (or magnetic inductivity) is called Tesla (unit).
He received the ‘Elliott Cresson Medal’ in 1894. He was awarded the ‘Order of Prince Danilo I’ in 1895.
He received the ‘John Scott Medal’ in 1934.
The government of Yugoslavia awarded him the ‘Order of the White Eagle, I Class’ in 1936.
In 1937, he received the ‘University of Paris Medal.’
On the occasion of his 75th birthday, he was featured on the cover of ‘TIME’ magazine.

He followed a tight routine in his daily life. He worked for about 15 hours a day and slept for less than two hours. He did not have much of a social life and walked for eight to ten miles every day.
He possessed a photographic memory and spoke eight languages fluently. Despite the fact that many ladies were madly in love with him, he never married and had no known partnerships.
In July 1891, he became a naturalized citizen of the United States. In his final years, he became a vegetarian, surviving solely on milk, bread, honey, and vegetable juices. Toward the end of his life, he used to feed pigeons on a daily basis.
He died in a hotel room in New York City on January 7, 1943, of unexplained circumstances. He died of coronary thrombosis, it was later discovered.
The ‘Nikola Tesla Award’ is given out every year for remarkable contributions to the generation or use of electricity.