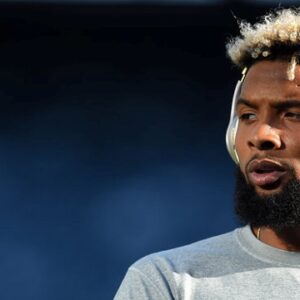 Odell Beckham Jr. is an American football wide receiver who now represents the New York Giants of the National Football League. He began playing football with zeal in elementary school and became so enamored with the game that he would practice for hours with his friends, and even alone if necessary. He was a member of the Louisiana State University football team and was picked by the NYG (New York Giants) in the 2014 NFL draft due to his incredible skills and command of the game. He was the twelfth player chosen from a large number of candidates. Beckham has secured his place in the Giants’ lineup over time and has been one of the team’s most successful and productive players. But, gradually, all of the fame and glory wore him down, and he found himself himself in a slew of problems, some of which were serious enough to jeopardize his’still young’ professional football career. He got a chance to play in the fifth game of his rookie season after missing the first few games with the Giants. He set multiple rookie receiving records in his first season alone. By the end of the season, Odell had made a one-handed touchdown catch and had captured the attention of the entire country. Sport experts and pundits still refer to it as the best catch ever made. Beckham has maintained his dazzling form and, at times, single-handedly secures victories for the New York Giants.

Odell Cornelious Beckham Jr. was born in Baton Rouge, Louisiana, to Heather Van Norman and Odell Beckham Sr. on November 5, 1992. His parents, as well as his stepfather Derek Mills, were all accomplished athletes in their day. He is the eldest of three Beckham children, with a younger brother, Kordell, and a younger sister, Jasmine.
He went to Isidore Newman High School in New Orleans, but he was never very punctual in the classroom. Odell was always interested in sports as a kid and could be found on the basketball court and running track.
Odell was inspired to pursue a career in athletics by his parents’ passionate relationship with sports and the ‘athletic feelings’ in their home. His father was a running back at LSU, and his mother was a renowned track athlete at the same school.
Odell has stated that he was fairly athletic as a child and that his parents raised him in a’sporty style,’ and that this is where he gets his tremendous self-confidence.

Odell Beckham began his football career while a student at Louisiana State University, where he was a member of the football squad. Odell’s talent was first displayed as a freshman, when he finished with two touchdowns and 41 receptions for 475 yards, earning him a freshman all-SEC designation.
His sophomore year was no less eventful, as he continued his stellar play, starting 12 of the 13 games he played in. He and Jarvis Landry established one of the most amazing wide receiver duos in college football history as juniors in 2013, with one of the best receptions in the history of the major college league in the United States of America.
Odell won the Paul Hornug Award in 2013, which is presented to the greatest player in the major college football conference every year. He finished the 2013 season with a spectacular 57 receptions and eight touchdowns, and was then selected to play for the New York Giants in the NFL’s major leagues.

Career in the NFL

Odell missed a significant portion of his debut season as a professional player due to a hamstring injury, but when he returned in the fifth game against the Atlanta Falcons, he had four receptions and one score, which was quite impressive given that it was his first game.
Odell maintained his form in the subsequent games, earning celebrity status among sports fans. He was at his peak during the regular season finale against the Philadelphia Eagles, when he set a career high with 185 receiving yards and set the team record for any rookie player playing in this manner.
Odell was named as the first alternate for the 2015 Pro Bowl, making him the first Giants rookie wide receiver in franchise history. He revealed after the Pro Bowl match that he was sick for the most of the 2014 season and never fully healed while playing.
After the 2014 season, Odell became one of the most popular players, and several sportswriters praised his skills, making him one of the franchise’s most impactful rookies. Odell is the youngest player to have been featured on the cover of Madden NFL 16, the prestigious magazine dedicated to the sport.
Odell’s 2015 season went well, but not without a few stumbling blocks. He got into many fights with Josh Norman of the Carolina Panthers, and he was suspended for one game as a result. He finished the season in tenth place in the NFL standings.
There were a lot of accomplishments in 2016, but there were also a lot of issues. Odell started all 16 games and finished with 101 receptions and 10 touchdowns, which was the most of his career, and he was named to the Pro Bowl for the third year in a row.

David Alaba, a Bayern Munich star player, is a close friend of Odell Beckham, who has identified him as one of his favorite modern sportsmen.
Odell is a prominent personality who has no qualms about sharing details about his personal life with the media and his supporters. He allegedly had a long-term relationship with reality TV star Khloe Kardashian, and the two were seen holding hands at various occasions together.
Amber Rose and Zendaya have also been linked to him. When it comes to his present relationship status, he insists that he is not dating anyone.
Odell has always been worried about his future, which is why he continues to practice in his spare time. He also enjoys Italian cuisine and has admitted to being addicted to it.
He is very active on social media sites and has a sizable Twitter following.

Odell is commonly regarded as one of the wealthiest American athletes, with a net worth of USD 5 million and an annual income of USD 1.9 million, respectively.

He sees NBA player Shaquille O’Neil as a father figure and claims that, aside from his parents, Shaq is the most influential athlete in his life.
Odell Beckham Jr. enjoys romantic comedies and considers ‘Lady in the Tramp’ to be one of his favorites.
Odell is his personal style icon, and he enjoys trying out new hairstyles and beard ideas.