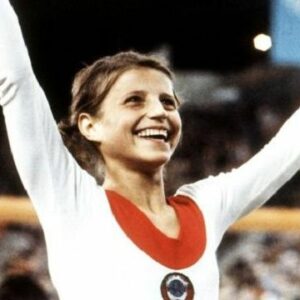 Olga Valentinovna Korbut is a former Soviet gymnast who got the nickname “The Sparrow from Minsk” after winning six Olympic gold for her country. She also acted as an unofficial goodwill liaison between the Soviet Union and the United States during the Cold War. She was born in Belarus and began her gymnastics training at an early age. She first demonstrated her talent for back flips and somersaults during an event in the Soviet Union, where she was praised for her abilities. A year later, the little gymnast won a gold medal at a national competition and went on to compete in her first international competition. In her debut Olympic Games (1972 Munich Olympics), she excelled, capturing three gold and one silver medal for her country. Her outstanding performance catapulted her to international recognition almost immediately. She extended her winning streak over the next few years, winning multiple medals at international competitions. Even while her medal tally and skill level are always inspirational, she is best known for her creativity and charm, which helped the sport gain worldwide recognition. She brought to Olympic gymnastics qualities that few had seen before, and the ‘Korbutsalto’ and ‘Korbut Flip’ remain prominent in international gymnastics to this day.

Valentin Korbut, an engineer, and his wife, Valentina Korbut, a chef, had her on May 16, 1955, in Grodna, Byelorussian SSR, Soviet Union. With three older sisters, she was the youngest child in her family.

She began gymnastics training at the age of eight, and the following year, she enrolled in a Belarusian sports school run by Coach Renald Knysh. She learned a tough backward somersault on the balancing beam with his help.

She debuted her backward somersault at a competition in the Soviet Union in 1969. In the same year, she achieved the first backward release move ever performed by a woman on uneven bars, a backflip-to-catch.

She competed in her first USSR championship in 1969, when she was 15 years old and eligible to compete. She finished fifth overall in the championship. She won a gold medal in the vault the following year.

Her first big break came in 1970, when she won the USSR championship and was named to the national team. She was unable to compete in several of the tournaments prior to the 1972 Summer Olympic Games owing to illness and injury.

She competed in the 1972 Munich Olympic Games when she displayed creative gymnastic moves and became a crowd favorite, winning three gold medals and a silver medal. She earned two gold medals in the individual events of Balance Beam and Floor Exercise, as well as a third in the team all-around competition. In the Uneven Bars, she took silver.

She competed in the World Championships in Varna in 1974, winning six medals. She took gold in the vault and the team all-around competitions, as well as silver in the uneven bars, all-around, balance beam, and floor exercise.
At the 1976 Olympic Games in Montreal, she had her final participation in international gymnastics. She won a team gold medal and an individual silver medal for the Balance Beam at the 1976 Olympics.

After the 1976 Olympics, she gave up competitive gymnastics. She became a teacher the next year after graduating from the ‘Grodno Pedagogical Institute.’
Her family moved to the United States in 1991, and she began teaching gymnastics.
She relocated to Arizona in 2000 and became the Head Coach of Scottsdale Gymnastics and Cheerleading.

For her capacity to bring the globe together, the United Nations named her “Woman of the Year” in 1975 and awarded her the “Gold Tuning Fork.”
She was the first gymnast to be admitted into the ‘International Gymnastics Hall of Fame,’ which was established in 1988.

She married Leonid Bortkevich, a well-known singer from the Belarusian folk band ‘Pesniary,’ in 1978 and gave birth to their son, Richard. The couple divorced in the year 2000. She then married Alex Voinich and became a naturalized US citizen.

Renald Knysh, her former coach, was publicly accused of abuse and rape while she was under his training in 1999.
She has also been active in philanthropic activities, particularly on behalf of victims of the 1986 Chornobyl nuclear power plant disaster.

Olga Korbut is one of the wealthiest gymnasts and one of the most popular. Olga Korbut’s net worth is estimated to be $1.5 million, according to Wikipedia, Forbes, and Business Insider.