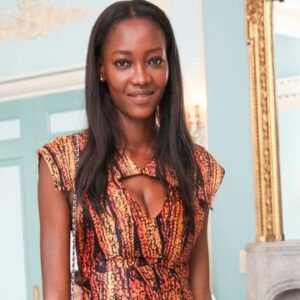 Oluchi Onweagba is a Nigerian supermodel, entrepreneur, and television personality. She is famed for introducing the world to Africa as a supermodel source. She is not only attractive, but she is also intelligent. She earned a bachelor’s degree in management from New York University. Oluchi suffered with body image as a youngster, which is hard to believe given her supermodel career. She had always struggled with her weight, but things changed when she was persuaded to enter the “Nokia Face of Africa” contest. She got a $150,000 three-year modeling deal with Elite Model Management after impressing the judges. Oluchi’s career took off after she relocated to New York. She walked the runways in Paris, Milan, and New York with photographers such as Steven Meisel, Nick Knight, and David LaChapelle. She immediately soared to supermodel prominence, becoming a member of the Victoria’s Secret Angels in 2002. She married Luca Orlandi, an Italian fashion designer, in 2005 and began a four-year run in the Sports Illustrated swimsuit issue. She’s since utilized her success to create a modeling agency in Africa in order to help the future generation of African models.

Oluchi Onweagba was born in Lagos, Nigeria, on August 1, 1980. She grew raised in Lagos with her brother and sister. Her father worked for the government, while her mother worked as a nurse.

Her modeling career began in 1998 when she won the “Nokia Face of Africa” competition. A modeling contract with Elite Model Management was included in the prize package.

In 1998, she made her runway debut. It was for Marc Bouwer, a designer.
She was chosen as the Nars Cosmetics cover girl in 1998.
Steven Meisel photographed her for the Italian cover of Vogue in August 1998.

She had a fantastic year in 1998, which came to a close in September. She walked the runways for world-class labels such as Gucci, Chanel, and Christian Dior in Paris, Milan, and New York.

In 1999, she has named the face of the new Gap campaign. She also collaborated with Steven Meisel on another Vogue shoot.

At the turn of the century, she didn’t slow down. Surface, a British magazine, had her on the cover.
In 2001, she continued the trend with a runway walk in Paris for Christian Dior.
She walked into Victoria’s Secret fashion show in February 2002. This was the first of seven years in a row that she walked in the show.

She returned to Africa in 2003 to take part in the inaugural Cape Town Fashion Week.
Oluchi’s year in 2004 was a big one for her, and she kicked it off by obtaining a contract with Cover Girl.
She walked in the John Galliano fashion show in Paris in March 2004. She walked in the Kenneth Cole and Tommy Hilfiger shows in New York later that year.

In 2004, Oluchi performed print art for Lancôme. She also worked for Victoria’s Secret and Bergdorf Goodman on catalogs.

In 2004, she also made her cinematic debut. In the film ‘After the Sunset,’ she played a character’s girlfriend.
Her first shoot for the Sports Illustrated Swimsuit Issue was in 2005. This was her first of four years with the publication.

In 2008, she established her own modeling agency in Africa. Its headquarters in Cape Town and Johannesburg is known as OModel Africa.
She is currently a judge and host of the reality show Africa’s Next Top Model.

Her work with Victoria’s Secret is one of Oluchi’s most notable modeling achievements. Being in their annual fashion show even once is an accomplishment in and of itself, and she walked the runway for seven years in a row.

Her work with Sports Illustrated was another of her major accomplishments. From 2005 through 2008, she was included in their swimsuit issue for four years in a row.
In 2008, she founded OModel Africa, a modeling agency in Africa. Her ambition is to leverage the visibility that her modeling profession has given Africa to help aspiring African models find work.

Oluchi was the winner of the Nokia Face of Africa competition in 1998. She was offered a $150,000 contract with Elite Model Management as a result of this.

She married Luca Orlandi, an Italian designer, in 2005. They have two sons together.
She volunteers in Africa for LEAP Africa and NIPRO. She has freely donated her image to their promotions.

Oluchi’s net worth is believed to be $2.5 million. Her modeling career, as well as her modeling agency and hosting role on Africa’s Next Top Model, have all contributed to her net worth.

Oluchi graduated from New York University with a bachelor’s degree in leadership and management.
In the Igbo language, the name Oluchi means “God’s labor.”