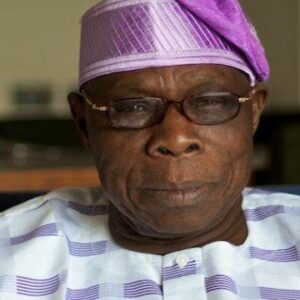 Olusegun Obasanjo is a former Nigerian President who served from 1999 to 2007. He was Nigeria’s Army General and served as the country’s military ruler from February 1976 until October 1979. He is still the first African military ruler to hand over control to a democratic government. By the time General Sani Abacha’s military dictatorship ended with his death, Nigeria had earned the dreaded pariah status, which was distinguished by a fifteen-year repressive regime. General Sani Abacha’s dictatorial leadership resulted in crimes against Olusegun Obasanjo, including his imprisonment in 1995. Obasanjo was essential in restoring democracy in the country and repairing the country’s tarnished image. In 1999, he was democratically elected President of Nigeria’s Federal Republic. From July 2004 to January 2006, he served as ‘Chairman of the African Union.’ He is a Yoruba descendant and a chieftain of the Ekerin Balogun of the Egba clan as well as the Balogun of the Owu Lineage. He was appointed as Africa’s special envoy by the United Nations. Since then, he has presided over democratic elections in African countries on behalf of the ‘African Union and Ecowas.’

He was born in Ogun State on March 5, 1937, and raised in Abeokuta, southwest Nigeria. “The Lord is victorious,” is the meaning of his first name.
He attended the ‘Baptist Boys’ High School’ in Abeokuta and then worked as a teacher for a period.

Because he couldn’t afford college, he joined the Nigerian Army in 1958 and proceeded to Aldershot, England, for six months of ‘Service Commission’ instruction at the ‘Mons Officer Cadet School.’ He was promoted to the rank of officer in the Nigerian Army after completing his training.

Olusegun Obasanjo was also dispatched to India, where he attended the ‘Indian Army School of Engineering and the ‘Defence Services Staff College, Wellington.’

He stayed in Kaduna to work for the ‘1 Area Command.’ After being promoted to Chief Army Engineer in July 1967, he became the leader of ‘2 Area Command.’
Following that, he served as commander of the army’s ‘3 Marine Commando Division,’ which successfully conquered Owerri, effectively ending the thirty-month Biafran civil war (from 1967 to 1970).

On February 13, 1976, Army Col. Dimka spearheaded a coup attempt to assassinate Murtala, Basanj, and a few other top army officers. While Murtala was dead, Obasanjo and General Theophilus Danjuma were still alive, and Obasanjo assumed command.

The chief of army staff, Theophilus Danjuma, and Basanj established a command structure and reorganized security in Lagos.

On February 13, 1976, the ‘Supreme Military Council’ inducted him as the country’s leader. He maintained the job until October 1, 1979, and became a notable African statesman. He worked hard to forward the initiative of establishing civilian governance in 1979, as well as reform measures aimed at improving the quality of public service.

He established ties with the United States, and the second republican constitution was modeled after the US Constitution in 1979. The country was ready for a democratic government to be founded through local and national elections, with a President, House of Representatives, and Senate.

In the 1979 presidential election, he did not run for president. On October 1, 1979, he peacefully handed over power to Nigeria’s newly elected President, Shehu Shagari, making him the first military ruler to do so in Nigeria’s quest for democracy.

General Sani Abacha’s dictatorial rule (from 1993 to 1998) was marked by crimes, including Olusegun Obasanjo’s imprisonment in 1995. During his time in prison, he experienced a “spiritual rebirth.” Sani Abacha died unexpectedly on June 8, 1998, ending his incarceration.

He ran for President of Nigeria as a presidential candidate for the People’s Democratic Party (PDP) in the 1999 elections, winning with 62.6 percent of the vote. He assumed office on May 29, 1999. This day is known as ‘Democracy Day,’ and it is recognized as a public holiday in Nigeria since it ushered in a new era of democracy.

During his first term as president, he traveled much and had little support from the West, especially the United States and the United Kingdom. He was praised around the world for the crucial conciliatory measures done by Nigeria to keep regional peace in Liberia and Sierra Leone.

He intended to alleviate poverty and corruption while strengthening democracy by reforming the police and military. One of the most difficult difficulties he faced was the racial and religious tensions that erupted after violent episodes.
He had disagreements with a number of public figures, including the President of the ‘Senate’ and the Speaker of the ‘National Assembly,’ and had to defend himself against censure motions from both houses.

Despite the fact that the 2003 presidential elections were marred by turmoil, including religious and ethnic violence, Obasanjo declared victory over his main rival, former military ruler General Muhammadu Buhari.

Following his decision to grant asylum to Charles Taylor, Liberia’s deposed president, he was censured in November 2003.

On June 12, 2006, he and Cameroon’s president, Paul Biya, signed the ‘Greentree Agreement,’ which ended the Bakassi peninsula border issue. Despite a resolution approved by the Nigerian Senate calling such a move unconstitutional, Buhari ordered the Nigerian Army to withdraw from the Bakassi Peninsula as planned.

During his two presidential mandates, he reshuffled his cabinet of ministers several times and even combined and split ministries.

He claims he never considered a third term, but his “Third Term Agenda,” which proposes amending the constitution to allow the President to serve a third four-year term, has landed him at the heart of a controversy. The bill was rejected by the ‘National Assembly’ after a political media uproar.

Following his presidency, he remained as Chairman of the People’s Democratic Party’s Board of Trustees until April 2012, when he resigned.
On February 16, 2015, he left the PDP and ordered a ward leader to shred his membership card while at a conference.

He is a member of the ‘Africa Progress Panel.’ The panel consists of ten renowned persons who advocate for Africa’s fair and sustainable development at the highest level.

He is a member of the non-profit ‘Club de Madrid,’ which has over a hundred members who have served as Presidents and Prime Ministers of various nations. In the global community, the organization promotes democracy and reform.

Esther Oluremi, his first wife, served as the ‘First Lady of Nigeria’ from February 13, 1976, to October 1, 1979. Dr. Iyabo Obasanjo-Bello, one of her sons with Obasanjo, was an Ogun State Senator.
Lynda, his second wife, was murdered by armed men in 1987.

Dare Obasanjo, one of his kids, works for Microsoft as a ‘Principal Program Manager.’
His children live in Nigeria, the United States, and the United Kingdom.

Olusegun Obasanjo is one of the wealthiest and most popular world leaders. Olusegun Obasanjo’s net worth is estimated to be $1.5 million, according to Wikipedia, Forbes, and Business Insider.