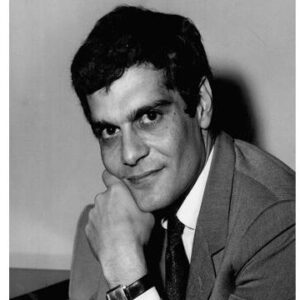 Omar Sharif was an Egyptian film actor who was best known for his roles in American and British productions. Sharif, the gentlest incarnation of romantic heroism, was well-liked by the team as one of the least demanding actors. After a brief stint working for his father’s business, he made his screen debut in the film ‘Shaytan Al-Sahra’ (alternatively titled ‘Devil of the Desert’). He met Faten Hamama, an established actress at the time, while filming his second film, ‘Sira’ Fi al-Wadi’ (also known as ‘Struggle in the Valley’). His portrayal of an Arab chief in ‘Lawrence of Arabia’ immediately earned him a female following. Omar Sharif, a highly civilized man with cosmopolitan tastes, won numerous awards for his electrifying performances in films such as ‘Lawrence of Arabia,’ ‘Doctor Zhivago,’ and ‘Monsieur Ibrahim.’ His first love was frequently stated to be bridge, and he wrote numerous columns on the subject for several newspapers. Additionally, he authored a bridge book and produced an institutional video. He was frustrated by Egyptian President Gamal Abdel Nasser’s travel restrictions, which resulted in his self-exile in Europe. This was also one of the primary reasons for his divorce, as he was frequently out of the country due to his shooting schedules.

His father was a merchant of precious woods, and his mother was a well-known society hostess.

He was a member of Egypt’s Syria-Lebanese ‘Antiochian’ Greek Catholics and was descended from Melkite Catholics.

He began demonstrating his aptitude for languages during his college years at Victoria College in Cairo. Later in life, he graduated from Cairo University with a degree in mathematics and physics.

He joined his father’s business following graduation but soon left to study acting at London’s Royal Academy of Dramatic Art.

Omar Sharif began his acting career in 1954 with the film ‘Shaytan Al-Sahra’ (alternatively titled ‘Devil of the Desert’). He also appeared in another film that year, ‘Sira’ Fi al-Wadi’ (also known as ‘Struggle in the Valley’), as Ahmed.

His popularity gradually grew to stardom, and he made his Egyptian debut in the 1958 production ‘La Anam’ (‘Sleepless’). He starred in the French film ‘Goha’ as well as two other films, ‘Shatie el asrar’ (‘Beach of Secrets’) and ‘Ghaltet habibi’ (‘My Lover’s Fault’).

He appeared in a slew of films in 1959, including ‘Siraa fil Nil’ (‘Struggle on the Nile’), ‘Sayyidat al-Qasr’ (‘Lady of the Palace’), ‘Min ajal emraa’ (‘For a Woman’), ‘Maweed maa maghoul’ (‘An Appointment with the Unknown’), and ‘F
Omar Sharif’s first break came in 1962, when he was cast in the English historical epic ‘Lawrence of Arabia’.

David Lean, the epic’s director, insisted on including Sharif despite the fact that he was little known outside of Egypt.

Lean insisted on ethnic actors to add authenticity to the film, and Sharif’s role proved to be one of the most demanding supporting roles in Hollywood history.

He worked with Lean again in 1965 on the film ‘Doctor Zhivago’. The film starred Julie Christie and was based on the Russian Revolution. ‘Genghis Khan’, ‘Marco the Magnificent’, and ‘El Mamalik’ are also among the year’s films.

His performance as a Muslim Turkish merchant who acts as a father figure to a Jewish boy in ‘Monsieur Ibrahim’ (2003) earned him the prestigious César Award for Best Actor.

Omar Sharif’s most notable role in his career was as Serif Ali in ‘Lawrence of Arabia.’ The film, directed by David Lean, was a watershed moment in Sharif’s career, earning him numerous awards and widespread recognition.

His performance in ‘Doctor Zhivago’ earned him both critical and commercial acclaim. His performance as an elderly Turkish shopkeeper in the film ‘Monsieur Ibrahim’ was also lauded.

UNESCO awarded him the Sergei Eisenstein Medal in 2005 for his contributions to international film and cultural diversity.

Omar Sharif was born in Egypt and lived there until 1965, when he relocated to Europe. Though his father’s business initially struggled, it eventually flourished.

King Farouk frequently paid him visits and befriended Sharif’s mother, whom he used as a card-game partner. Following 1952, as wealth shifted in Egypt as a result of Nasser’s policies, his father’s business suffered a decline.

Omar Sharif met actress Faten Hamma in 1954 while filming the film ‘Struggle in the Valley’. Both fell in love with one another and married in 1955, shortly after Sharif converted to Islam. Tarek Sharif, the couple’s son, was born in 1957.

After eight years of living apart, Omar and Faten divorced legally in 1974. The primary reason for their separation is attributed to his prolonged absence from Egypt due to travel restrictions imposed by the Nasser government.

He was romantically linked to actress Barbra Streisand. This relationship came dangerously close to robbing him of his Egyptian citizenship.

He underwent a triple heart bypass in 1992. Sharif was diagnosed with Alzheimer’s disease in May 2015.
He died on July 10, 2015, of a heart attack. His son and two grandsons survive him.

Omar Sharif had an estimated net worth of $2 million during his lifetime. He earned this through his acting career.

He was once one of the world’s greatest contract bridge players. In 1992, he licensed the computer game ‘Omar Sharif Bridge’ with his name.

Sharif used to smoke 100 cigarettes a day until his heart bypass in 1992. He did, however, quit smoking shortly after the operation.

He was fluent in English, French, Arabic, Italian, and Spanish and was an avid horseracing fan.