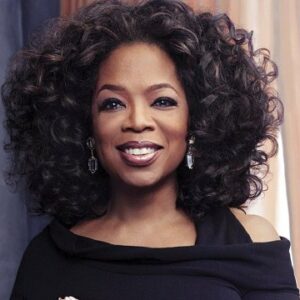 Oprah Winfrey is a self-made rich African-American woman with international clout. Oprah was raised mostly by her grandmother after being born to an unwed mother who had a brief connection with a soldier stationed nearby. Winfrey was sexually molested and tormented as a child, yet she overcame the odds to focus on her basic and secondary studies. Winfrey realized she wanted to work in the broadcast profession after having a close relationship with a young man and winning a local beauty pageant that gave her the opportunity to shine at a small radio station. Despite failing one important interview, she persisted and relocated across the nation to work as a television reporter. Despite the fact that she never fully fit in and was eventually fired, she earned enough expertise to be granted her own morning talk program. Winfrey traveled across the country to host a new talk show after delivering strong ratings. She was granted leadership of her own show after the ratings skyrocketed, and it quickly became a national sensation. Winfrey quickly expanded her media empire, founding a magazine, television network, and radio station, and is today regarded as one of the world’s most powerful women.

Oprah Gail Winfrey was born in Kosciusko, Mississippi, on January 29, 1954. Vernita Lee was her mother, and she grew up on a tiny family farm. Vernon Winfrey, Oprah’s biological father, was a soldier stationed at a nearby base. Hattie Mae Lee, Oprah’s grandma, raised her. Her “only pals” as a child, according to Oprah, were the animals on her family’s farm. When she was three years old, she gave her first public recital at a local church.
Throughout her adolescence, she was shuttled between many carers and attended Nashville East High School in Nashville, Tennessee. Oprah was picked to read the news on a small radio station during her senior year. She also won Miss Black Tennessee in the same year.

The local CBS television station in Nashville, Tennessee offered her a job as a co-anchor when she was still a teenager. She declined it three times. After the fourth offer, Oprah Winfrey, then 19 years old, said yes.
She didn’t get the position after the interview, but she was offered a full-time job as a reporter for a Baltimore television news channel. She was fired from the news division at the age of 22 after doing poorly as a reporter.
Winfrey was given a boost by the station’s director, who chose her to host a morning chat show called ‘People are Talking.’ Her talk show was a ratings success for the next seven years. She relocated to Chicago in 1981 to anchor a chat program called ‘A.M. Chicago.’ After a massive ratings gain, the producers changed the name to ‘The Oprah Winfrey Show’ four years later.

In 1985, Winfrey starred in the film ‘The Color Purple’ as an actor. The first episode of ‘The Oprah Winfrey Show’ aired on September 8, 1986. She started ‘Harpo Studios’ in the same year. Her show won three ‘Daytime Emmy Awards’ in June 1987. It received another ‘Daytime Emmy for Outstanding Talk Show’ the following year.
She co-starred in and produced the miniseries ‘The Women of Brewster Place’ and ‘Brewster Place’ in 1989. Her firm, ‘Harpo Productions,’ began producing ‘The Oprah Winfrey Show’ in the same year.
She did an interview with Michael Jackson in 1993. The show went on to become the most watched interview of all time, as well as the fourth most watched event on American television.

She founded ‘Oprah’s Book Club,’ a talk show devoted to book discussions, in 1996. Millions of additional copies of Winfrey’s recommended books were sold.
She appeared as a therapist in an episode of the sitcom ‘Ellen’ in 1997.
She produced and featured in the film ‘Beloved’ in 1998. Texas cattlemen sued her the same year for allegedly making disparaging remarks about hamburgers.

‘Oprah’s Angel Network,’ which offered funding to philanthropic and non-profit groups, was founded the same year by this talk show host.
She established ‘O, the Oprah Magazine’ in 2002. It was later confirmed as the most successful magazine start-up in history. She appeared on the ‘Late Show with David Letterman’ on December 1, 2005, and was dubbed the ‘television event of the decade’ by some critics. She voiced Charlotte in the animated film ‘Charlotte’s Web’ in 2006. She also started ‘Oprah Radio,’ a channel on ‘XM Satellite Radio,’ in the same year.

In the 2007 film ‘Bee Movie,’ she gave the voice of Judge Bumbleden. In the presidential election of 2008, the renowned artist endorsed Barack Obama. Her public backing was seen as a crucial component in Obama’s eventual triumph. She performed Eudora’s voice in the 2009 film ‘The Princess and the Frog.’

The NAACP presented this remarkable artist with the ‘Spingarn Medal’ in 2000.
She received the ‘Presidential Medal of Freedom’ in 2013. Her broadcasting and acting careers have also earned her a slew of prizes and accolades.

Winfrey has spoken out about being raped by a family member when she was nine years old. She also revealed that she gave birth at the age of 14 and that her child died while he or she was little. Winfrey has used her personal experience to advocate for support groups for sexual abuse survivors. She lives in California on a property known as ‘The Promised Land.’ She has had relationships with a number of celebrities, including John Tesh and Roger Ebert, although she has never married. Stedman Graham, her long-term partner, has been her official boyfriend since 1986.
Morehouse College has received almost 400 scholarships from the charitable talk show presenter. She was also named one of the top 50 most giving people in the United States.