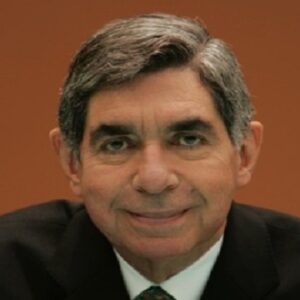 Oscar Arias Sanchez is a former two-term President of Costa Rica who was instrumental in bringing Central America peace. His first aim, when he was born in 1940 into one of Costa Rica’s most powerful coffee-growing families, was to become president. However, when he grew older, he wanted to pursue a career as a doctor, but quickly discovered that politics and administration piqued his interest. As a result, at the age of 32, he studied economics and law before joining José Figueres Ferrer’s administration as Minister of National Planning and Political Economy. Following that, he quickly rose through the ranks of the party, becoming general secretary at the age of thirty-nine and president of the country at the age of forty-six. During his time as president, he was instrumental in resolving Central America’s long-standing military conflict, for which he was awarded the Nobel Peace Prize. Years later, at the age of 66, he was elected President of Costa Rica for the second time, and he continued to fight for regional peace as well as his country’s development.

Oscar Arias Sánchez was born on September 13, 1940, into a wealthy and politically powerful family in Heredia, ten kilometers north of San José. Several members of his family had occupied key positions in the national legislative and presidential cabinets over the years.

Oscar’s father, lawyer Juan Arias, was the head of the Central Bank of Costa Rica. Lillyan Arias Sanchez, his mother, was a descendant of another coffee-growing family. He was the eldest of three children born to his parents. Rodrigo Arias Sánchez, his younger brother, is about six years his junior.

Given his upbringing, it’s no surprise that when Oscar was questioned about his life’s aim, he stated unequivocally that he wanted to be president. He did, however, suffer from serious asthma as a child and hence spent a lot of time indoors reading books. He was a hard worker who read late into the night.

He attended a private Catholic school in Heredia before enrolling at Colegio Saint Francis in San Jose. His life ambition had shifted by the time he graduated from high school, and he now desired to become a doctor.

As a result, he enrolled in Boston University in 1959, where he pursued premedical classes in chemistry, botany, and zoology, but rapidly discovered that these subjects were not his cup of tea. He preferred history and politics instead.

Furthermore, Oscar Arias found it difficult to acclimate to Boston after arriving from a tiny town with a temperate temperature like Heredia. He would go to classical music performances at Boston Symphony Hall or go great distances to find someone with whom he could converse in Spanish while his classmates went to the local pubs.

He was enthralled with the 1960 presidential race in the United States and eagerly awaited the debate. J. F. Kenney’s new image of America captivated him, and he sent a letter to the new president outlining what Central America expected of him.

Meanwhile, he was enrolled in a summer school where he studied economics. It piqued his interest in both politics and government. As a result, by the end of 1961, he had dropped out of medical school and went home to Costa Rica to enroll in the University of Costa Rica.

‘Who governs Costa Rica?’ was the title of his doctoral dissertation. (Who is in charge of Costa Rica?) Actually, the article was a continuation of his earlier work, ‘Grupos de presión en Costa Rica,’ which he had written while studying in Costa Rica.

He also studied the British political system in England, admiring how the country stood up to the United States of America despite being heavily reliant on it in many respects. He also understood the importance of diplomacy and realized that bargaining is a powerful weapon for accomplishing one’s objectives.

Oscar Arias Sanchez returned to Costa Rica and began his career as a political science professor at the University of Costa Rica. Simultaneously, he re-entered politics with the National Liberation Party (PLN), serving as an assistant to former President José Figueres Ferrer, who was running for re-election.

Arias was appointed Minister of National Planning and Political Economy when Figueres was re-elected President in 1972, a position he held until 1977. Given Costa Rica’s lack of infrastructure at the time, it was a difficult job for someone so young.

During this time, he was known for his openness to new ideas as well as his neutrality. As a result, he rose quickly through the ranks of the party. He was elected International Secretary and General Secretary of the PLN in 1975 and 1979, respectively, representing the party at many Socialist International conventions.

In the meanwhile, he released ‘Costa Rica in the Year 2000’ in 1977. In it, he predicted that both farmers and factory employees will earn more money in the future. Furthermore, wealth distribution would be more equitable, there would be more justice, and the government would be more accessible.

Oscar Arias was elected to the national assembly in 1978, despite the fact that the PLN lost the election. As a member of the opposition, he introduced legislation to make the government more accessible to the general public.
He quit his position in the national assembly in 1981 to lead the presidential campaign of PLN standard-bearer Luis A. Monge. Monge was elected president in 1982 as a result of his efforts.

Oscar Arias won the party’s presidential nomination for the 1986 election two years later, circa 1984. As a result, he stepped down as party general secretary to focus on the campaign.

At the time, the country’s economy was in a deep slump, while insurgencies in neighboring Nicaragua and El Salvador were tearing the continent apart. Arias coined the phrase “Roofs, Jobs, and Peace” at a period like this.
The election was a tight call. Despite this, Arias was inaugurated in as President of Costa Rica on May 8, 1986, with 52.3 percent of the vote to 45.8% for the Christian Social Unity candidate.

He got right to work on the objectives he set out in his 1977 book, “Costa Rica in the Year 2000.” Until recently, the country’s economy was mostly centered on the production of coffee and bananas. His government is currently concentrating on unusual things such as rare flowers and fruits.

In addition, he worked to promote tourism as one of the country’s economic cornerstones. He also instituted educational changes, including the reintroduction of standardized academic assessments at the end of primary and secondary school.

He was most successful, however, in the field of foreign relations. The Esquipulas Nicaraguan Peace Agreement was negotiated largely as a result of his efforts, and peace was restored to the continent. In 1987, he was given the Nobel Peace Prize for his efforts.

Former presidents are not allowed to run for re-election in Costa Rica, thanks to a constitutional amendment passed in 1969. As a result, when Oscar Arias’ term ended in May 1990, he accepted a visiting post at Harvard and began writing about international affairs and crisis resolution.

President for a Second Term

Oscar Arias also contested the 1969 amendment at the Sala IV, the Constitutional Chamber of the Supreme Court of Justice of Costa Rica, at some point during this time. His application was turned down in September of 2000.

Some of his supporters then contested the validity of the amendment in 2003. The decision was in their favor this time. The amendment was knocked down in April 2003, allowing him to run for re-election.

Following that, he stood for the next general election in February 2006, focusing his campaign on the battle against poverty and corruption. He also vowed to grant educational scholarships to children from low-income families to reduce school dropouts.

Oscar Arias was elected president, but by a slim margin. On May 8, 2006, he took the oath of office at the National Stadium. One of his first acts was to provide scholarships for youngsters from low-income households, fulfilling a campaign promise.

He stayed in government until 2010, implementing a variety of policies. He held a referendum in 2007 on whether to join the Central America–Dominican Republic Free Trade Agreement (CAFTA–DR). He signed the treaty after the country voted in favor of it, and the CAFTA-DR went into effect in January 2009. It was, by the way, the first referendum held in the country. During his presidency, he also managed to mediate in the 2009 Honduran constitutional crisis.

Oscar Arias Sanchez is best known for his peace initiatives in the mid-to-late 1980s, which aimed to resolve Central America’s long-standing military issues. The right-wing Contras, backed by the United States, were waging a guerilla war in Nicaragua against Marxist governments at the time, and Central America as a whole was in limbo.

Arias resisted US attempts to aid and abet the Contras on Costa Rican soil, despite having little sympathy for the left-wing doctrine. In May 1986, he met with the Presidents of Guatemala, El Salvador, Honduras, and Nicaragua to discuss the Contadora Peace Plan after first negotiating with the rebel group.

After it failed to bear fruit, he devised his own strategy, which differed from the Contadora Plan in some ways. He held another conference in early 1987 and presented his own peace plan. On August 7, the five presidents of Guatemala ratified the Esquipulas Nicaraguan Peace Agreement, which was based on the plan Arias had submitted.

Oscar Arias Sanchez received the Nobel Peace Prize in 1987 “for his work for peace in Central America, efforts that resulted in the agreement signed in Guatemala on August 7 this year.”

He was chosen to the Trust Fund for Victims of the International Criminal Court’s Board of Directors in 2003. Economists for Peace and Security has also elected him as a trustee.

Oscar Arias married Margarita Peón Góngora, a biochemist from Vassar College in New York, in 1973. She has been collaborating with her spouse throughout the process of transforming Costa Rica into a rich country. The marriage has two children: Oscar Felipe Arias Penón, a son, and Silvia Eugenia Arias Penón, a daughter.

Oscar Arias has a net worth of $ USD 6 million and earns a living as a politician.

Arias has authored and published a lot of books despite his active political career. The most popular is ‘Horizons of Peace: Costa Rica’s Contribution to the Central American Peace Process.’