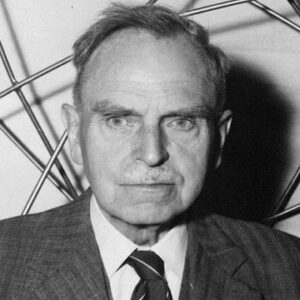 Otto Hahn was a famous German radiochemist who worked with radioactive isotopes for his whole life and won the Nobel Prize for discovering nuclear fission. Nuclear fission is thought to be the key invention that made the atomic bomb possible, though Hahn did not work directly on it. He is known as the “father of nuclear chemistry” and is one of the most well-known chemists of all time. Many people also looked up to him as a model scientist because he had done so well in school, had great ways of working, and was known to be honest. During his life, many scientists saw him as one of the most important people to find out about chemistry and physics, especially how physics could be done through chemistry. He was the founder and first president of the Max Planck Society, which is a well-known international scientific foundation. He was also the last president of its predecessor, the Kaiser Wilhelm Society. In his later years, he spoke out against nuclear weapons and tried to get rid of them. Many Germans looked up to him as a good example of a citizen, especially after World War II, and he won many scientific and civilian awards around the world. Read on to learn more about his life and works.

Otto Hahn was born in Frankfurt, Germany, on March 8, 1879. He was the youngest son of Heinrich Hahn, who was a glass worker and businessman, and Charlotte Giese. He started doing chemistry experiments in the family laundry room when he was 15. Two years later, he told his parents that he wanted to become a chemist.

In 1904, he got a job in radiochemistry at the University College London, where he worked with Sir William Ramsay, who was the first person to find out about inert gases. Two years later, he went back to Germany to work with Emil Fischer at the “University of Berlin.” Fischer gave Hahn his own lab, where he found things like radium-228 (mesothorium I) and thorium-230 (ionium).

In 1907, he began teaching at the “University of Berlin.” There, he met Lise Meitner, an Austrian physicist with whom he would work for the rest of his life. At the same time, Hahn was thought to be one of the best radiochemists in the world, and Adolf von Baeyer put him forward for the Nobel Prize.

Then, he tried to figure out how the Canadian physicist Harriet Brooks’s discovery of radioactive recoil worked.
In 1924, Albert Einstein, Max Planck, Fritz Haber, Wilhelm Schlenk, and Max von Laue all put in a voted for him to become a full member of the “Prussian Academy of Sciences.” Later in that decade, and for nearly twenty years after that, he ran the prestigious “Kaiser Wilhelm Institute.”

On December 16 and 17, 1938, Fritz Strassmann, who worked for Hahn, and Hahn did experiments that led to nuclear fission. Lise Meitner and Otto Frisch were able to explain the event years later.

In April 1945, the Allies took him and nine other German scientists into custody and flew them to England. The Nobel Prize committee decided to give him the Nobel Prize in Chemistry, but he was not allowed to travel, so he could not accept the award in person.

After the war, Hahn became a strong voice for social responsibility, saying that his discoveries shouldn’t be used by the military. In 1958, he and Albert Schweizer signed the Pauling Appeal to the United Nations, which asked for the “immediate conclusion of an international agreement to stop testing of nuclear weapons.”

Hahn and Lise Meitner worked together to find a new element, which they called protactinium. During the 1920s, the two of them were nominated for the Nobel Prize in Chemistry more than once. The International Union of Pure and Applied Chemistry (IUPAC) later confirmed that he and Meitner were the ones who found it.

In 1938, he found nuclear fission, which was his most important discovery. Later, this discovery made it possible to make atomic bombs. Even though he wasn’t directly involved in making these weapons, he felt bad that his research had helped make them possible.

In 1945, he won the Nobel Prize in Chemistry for finding out how atoms split apart. This was probably one of the most important scientific discoveries of the last 100 years. He was nominated for both the Chemistry Nobel Prize 22 times and the Physics Nobel Prize 16 times.

In 1957, the United Kingdom named him an Honorary Officer of the “Order of the British Empire,” and the Holy See gave him the “Gold Cross of the Order Pro Ecclesia et Pontifice.”

In 1959, he was given the “Grand Cross First Class of the Order of Merit” from West Germany and the “Officer of the National Order of the Legion of Honor” from France.

In 1913, he got married to Edith Junghans, who was an art student at Berlin’s Royal Academy of Art. After nine years, he and his wife had Hanno, their only child.
He fell and hurt himself on July 28, 1968, in Gottingen, Germany.

Scientists have tried many times but failed, to name new elements after him. (This is true even though it has been a long-standing tradition that the people who find the elements get to name them.)

Several secondary schools in Germany, Austria, and Switzerland are named after him. Squares, streets, and bridges are also named after him all over Europe. More than twenty countries around the world have put his picture on coins, medals, or stamps.

Otto is one of the wealthiest chemists and is on the list of the most well-known chemists. Based on what we found on Wikipedia, Forbes, and Business Insider, Otto Hahn has a net worth of about $14 million.

Focus, a German news magazine, asked 500 engineers, natural scientists, and doctors to vote on who they thought was the most important scientist of the 20th century. In 1999, he came in third. Einstein and Max Planck were the first two.