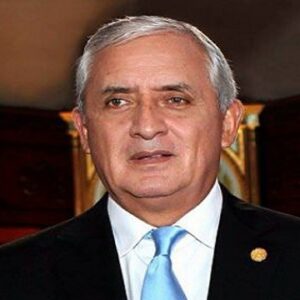 Otto Perez Molina is the President of Guatemala and a retired military officer in the Guatemalan army. He has a wealth of military expertise and has held numerous ranks after serving in the Guatemalan army for many years. Director of Military Intelligence, Presidential Chief of Staff, and military representative for the Guatemalan Peace Accords are just a few of his previous appointments. He played a key role in ending Guatemala’s 36-year civil war. In addition to these accomplishments, Molina has been accused of human rights violations and corruption during his military service. Otto Perez Molina created the ‘Patriotic Group,’ a right-wing political party, after retiring from the army. He ran for president in 2007, but lost by a razor-thin margin. In 2011, he ran for president again, promising to use a “iron fist” to combat Guatemala’s high crime rate and the threat of Mexican drug cartels. With 54 percent of the vote, he was elected President of Guatemala for the first time, becoming the first military officer to do so. As president, Molina has made Guatemala a lot more appealing country to conduct business with, and he has been recognized for his abilities to develop the country’s infrastructure on both a social and economic level.

Otto Perez Molina was born in Guatemala City on December 1, 1950.
Perez Molina received his diploma from Guatemala’s National Military Academy in 1969. He subsequently went on to the Inter-American Defense College and the School of the Americas.

Otto Perez Molina was a member of a group of army officers who supported Defense Minister Oscar Meijia’s coup against President Efrain Rios Montt in 1983.

During the Guatemalan Civil War, he served as the D-2 Directorate of Intelligence, one of the army’s two main intelligence gathering units, from January 1992 until June 1993.

Molina helped the forced resignation of corrupt president Jorge Serrano, who had attempted a self-coup, in 1993 while serving as Chief of Military Intelligence.

President Ramiro de Leon Carpio appointed him Presidential Chief of Staff in 1993, and he held the position until 1995.

He was selected as the military’s primary envoy in talks with guerilla forces to conclude the Guatemalan Civil War. He was a significant figure in the negotiations that led in the 1996 Peace Accords, which put an end to the 36-year-long conflict.

Between 1998 and 2000, he served on the Inter-American Defense Board as Guatemala’s representative.
Molina left the military in January 2000 to pursue a career in politics.
On February 24th, 2001, hefounded the Patriotic Party, a centre-right political party.
Perez Molina stood for president in 2007 as a member of the Patriotic Party, but lost to Alvaro Colom by a razor-thin margin.

In 2011, he stood for president again and was elected with 54 percent of the vote. On January 14th, 2012, he was sworn in as President of Guatemala.

He started the ‘Zero Hunger Program’ after taking the presidency, with the goal of reducing chronic malnutrition. The initiative, however, has been criticized for a lack of resources and for failing to reach a large portion of the at-risk population due to a lack of organization.

Molina was voted one of Guatemala’s top ten people of the year by the Chamber of Free Enterprise in 1993.
Otto Perez Molina got the ‘Leader of the Year Award’ at the 19th annual BRAVO Business Awards in 2013 for transforming Guatemala into a desirable Latin American business destination. His administration has attracted investors and enhanced public security, resulting in a 20 percent increase in direct foreign investment in Guatemala between 2011 and 2012.

He has been married to Rosa Perez Leal for about 40 years; they married when Rosa was 17 years old. The couple has two children: Lissette Perez, a girl, and Otto Perez Leal, a son.

Otto Perez Leal, Molina’s son, is also a politician, having joined the Patriot Party in 2008 and being elected Mayor of Mexico on September 11th, 2011.

The family of Otto Perez Molina has been the target of political attacks on several occasions. A masked gunman attacked and wounded Molina’s daughter, Lissette, on February 21, 2001, only days before he was slated to start the Patriotic Party. Otto Perez Leal was ambushed by gunmen while driving with his wife and young daughter in November of the same year.

Molina served in the Guatemalan army as a member of the Kaibiles, the army’s special forces division, which is notorious for its brutality.