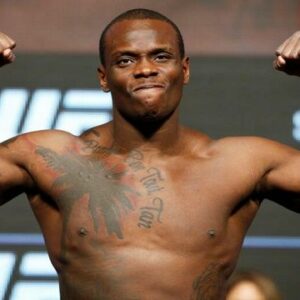 Ovince Saint Preux is a well-known fighter in the Ultimate Fighting Championship’s light heavyweight division (UFC). He has participated in events such as Strikeforce, Xtreme Fighting Championship (XFC), and Shark Fights as a professional mixed martial artist (MMA). He possesses a blue belt in Brazilian Jiu-Jitsu. The Von Flue Choke, a submission move, has made him famous for his tactics and maneuvers. Ovince has gained a total of twenty-two victories, including seven UFC triumphs. Many of Vince’s victories have come via choking his opponents. In fact, sixteen of his twenty-two triumphs have come by way of submission. He is ranked sixth among the leading UFC light-heavyweight competitors.

Ovince was born in Immokalee, Florida, on April 8, 1983. He grew up in a close-knit Haitian-American neighborhood. There are six of his siblings.

Markinsie St. Preux, his father, was a construction worker and farmer. He deserted him and his mother, Mercilia, who was three weeks away from giving birth to twins at the time. Like the majority of families in the neighborhood, Ovince’s family was impoverished.

Ovince took an interest in sports and concentrated on improving his athletic abilities. During his senior year of high school at Immokalee High School, he won a wrestling match 26-1. He excelled in other sports as well.

During the 2001-2004 football seasons, he was a member of the Tennessee Volunteers’ defense after being recruited by the school. The Naples Daily News named him the Defensive Football Player of the Year. Soon after, he won state titles in the 110-meter dash, 300-meter dash, discus throw, and relay.

In 2004, he earned a degree in sociology. He continued to play football and began boxing training.
Ovince stopped playing football and began focusing on martial arts. In Knoxville, Tennessee, he began his training at Knoxville Martial Arts Academy. Today, he is the institute’s main trainer.

Ovince began his career in mixed martial arts (MMA) in the Victory Fighting Championship (VFC) against Rodney Wallace. After two straight defeats, he defeated Robert Turner for his first victory. During the beginning of his career, he began to concentrate on submission moves and eventually mastered a handful.

He later joined Strikeforce, a mixed martial arts and kickboxing organization. After suffering consecutive defeats, he returned to Strikeforce in 2010 and defeated the much more experienced, Brett Chism, via technical knockout in 75 seconds. Ovince went on to defeat Chris Hawk by employing the identical strategy he had done against Brett. He won eight consecutive Strikeforce matches.

In 2014, Ovince replaced an injured Jimi Manuwa in UFC Fight Night 56 against Mauricio Rua. Ovince began as an underdog because he was placed against an experienced fighter, but he ultimately prevailed.
Glover Teixeira submitted Ovince on April 8, 2015, during UFC Fight Night 73.

On April 23, 2016, during UFC 197, Ovince had his left arm broken in the second round when fighting light-heavyweight champion Jon ‘Bones’ Jones, yet he fought through all five rounds without showing any signs of pain.

At UFC 204 in Manchester, England in 2016, Ovince was knocked out in the second round by Jimi Manuwa.
On November 4, 2017, Ovince knocked out Corey Anderson in the third round of UFC 217 with a stunning left head kick.

Then, in the first round, he knocked out the wrestling superstar Mauricio Rua. On September 23, 2017, he ultimately defeated Yushin Okami.
Ovince has been devoted to rescuing children at risk of developing drug and alcohol abuse.

The majority of his gross revenue is donated to organizations seeking to save those children. He even created his own line of T-shirts with the slogan “Fight4Haiti.” Harvest107, a non-profit organization that provides fresh and sustainable food to low-income communities in the United States, will get proceeds from the sales.

Since 2013, Ovince has had the most victories in the UFC light heavyweight division with nine.
Three of the five Von Flue Choke submissions utilized in UFC history were successful for Ovince.

Two of these were used consecutively.
In terms of victories through technical submission in the light heavyweight division, he ranks second.

Ovince Saint Preux is one of the wealthiest and most well-known fighters. According to our investigation, Wikipedia, Forbes, and Business Insider, Ovince Saint Preux has an estimated net worth of $1.5 million.