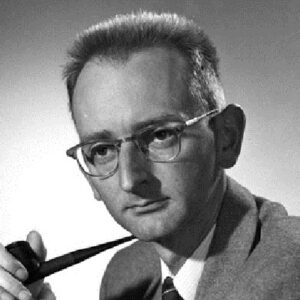 Antiprotons were discovered by Nobel Laureate American scientist Owen Chamberlain. The discovery of antiprotons is extremely important in the study of matter and antimatter. Negatively charged antiproton, according to his idea, is the polar opposite of positively charged proton. He also discovered the procedure of separating antiprotons alongside his colleagues. Later, he continued his research by using a photographic procedure to chronicle the collision and destruction of protons and antiprotons. He was a member of the Manhattan Project, the US’s covert endeavor to produce an atom bomb, when the US was involved in World War II. He was able to collaborate with Emilio Segre, an Italian scientist, on this research. He was working on nuclear cross sections for intermediate-energy neutrons and heavy-element spontaneous fission at the time. He worked on alpha particle decay, neutron diffraction in liquids, and high-energy nuclear particle processes, among other things. As part of his study, he designed and utilized polarized proton targets with two other renowned Professors. This groundbreaking experiment aided in the investigation of various high-energy processes, including pi-mesons and protons scattering on polarized protons, hyperon parity determination, and a test of time reversal symmetry in electron-proton scattering.

W. Edward Chamberlain and Genevieve Lucinda Chamberlain had Owen Chamberlain on July 10, 1920, in San Francisco, California. His father worked at Stanford University Hospital as a radiologist.
He attended Germantown Friends School after relocating with his family to Philadelphia, Pennsylvania. In 1941, he graduated from Dartmouth College in New Hampshire with a bachelor’s degree in science.

He went on to the University of California at Berkley after that. During this time, he met Emilio Segre, a well-known physicist. His studies were disrupted when the United States entered World War II in 1942.
In the same year, he joined the Manhattan Project, the US government’s secret initiative to develop an atomic bomb. He began working with Segre as part of this initiative at that time.

He worked on uranium isotopes, nuclear cross sections for intermediate energy neutrons, and heavy element spontaneous fission as part of this project.

In 1943, he traveled to Los Alamos to witness the first atomic bomb test. He resumed his doctoral studies at the University of Chicago under the supervision of physicist Enrico Fermi after the war ended in 1946.
In 1948, he worked on the diffraction of slow neutrons in liquids as part of his doctoral thesis. He was offered a teaching job at the University of California, Berkley, the following year. In 1949, he received his Ph. D. from this university.

In 1955, he collaborated on a research endeavor with Dr. Wiegand, Professor Segre, and Dr. Ypsilantis to find antiproton. They used the Bevatron, a strong particle accelerator, for this.

He investigated the interactions of anti-protons with hydrogen, deuterium, and other elements as part of the research. Antiprotons were used to create antineutrons as part of his research.
He got a Guggenheim Fellowship in 1957 for his work at the University of Rome on antinucleon physics. He was appointed Professor of Physics at the University of California, Berkeley, the following year. He was a Loeb Lecturer at Harvard University in 1959.

In 1960, he created polarized proton targets in collaboration with Professors Carson Jeffries and Gilbert Shapiro. This discovery aided in the investigation of the spin dependency of several high-energy processes.
For a brief period in the late 1970s, he worked at the Berkeley Bevalac accelerator on the investigation of the interactions of intense light nuclei with nuclear targets.

In later years of his life, he worked on the invention and building of the Time-Projection-Chamber alongside Dr. David Nygren. This experiment was useful for studying high-energy positron-electron interactions.
Aside from science, he was a key figure in causes such as peace and social justice. He was outspoken in his opposition to the Vietnam War. He also chastised the old Soviet Union’s suppression of scientists. During the 1980s, he was one of the founding members of the nuclear freeze campaign.

He was awarded the Nobel Prize in Physics in 1959 for his discovery of antiprotons. These antiprotons, also known as negatrons, are the antiparticles of protons. Emilio Segre and he shared this honor.

In 1943, he married Beatrice Babette Copper in a nuptial knot. Karen Chamberlain, Lynne Guenther, Pia Chamberlain, and Darol Chamberlain were their three girls and one son. In 1978, they divorced.

June Steingart Greenfield was his wife in 1980. Senta Pugh Gaiser was his third wife. Mary Pugh and Anne Pugh were his two stepdaughters. He was diagnosed with Parkinson’s disease in 1985 and was undergoing medical therapy.
In 1989, he stepped down as a teacher. In 2003, he was one of twenty-one Nobel Laureates who signed the Humanist Manifesto.
He died of Parkinson’s disease complications on February 28, 2006, in Berkeley, California.

Owen is one of the wealthiest physicists and one of the most well-known physicists. Owen Chamberlain’s net worth is estimated to be $1.5 million, according to Wikipedia, Forbes, and Business Insider.

According to one of his interviews, this Nobel Laureate physicist was the only kid in his first grade class who couldn’t write his own name. The most intriguing thing about him is that he disliked science topics at the time.