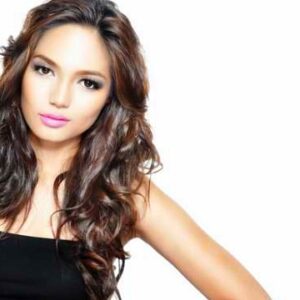 Patricia Marie Tumulak is a model, beauty pageant queen, and television host from Manila, Philippines. She began her career with aspirations of opening her own pre*school and received outstanding grades in academics, but her focus eventually switched to modeling. She went on to compete in the Miss Philippines Earth Beauty pageant, where she came in third place, earning the title of Miss Philippines Fire 2009. Although the honor was not as significant, considering her humble beginnings, it was enough to instill confidence in her, and in 2014, she was awarded the prestigious title of Miss Multiverse Philippines, and she went on to represent her country in the Miss Multiverse International pageant held in the Dominican Republic. She went on to have other television appearances, and she became one of the most well-known figures in the Filipino entertainment industry. She does product endorsements and is currently a co-host of a show called ‘Eat Bulaga!’

Patricia Tumulak was born on March 3, 1988, in the Philippines’ national capital region. She claimed in some of her early interviews that she came from a typical middle-class household and had never considered a career in the entertainment industry. She studied Child Development and Education at Miriam College since she intended to be a school teacher and run a pre-school at the time.

While in college, her attention moved to the glamour sector, and she pursued further study in Hair Design and Beauty in the Ortigas Branch, where she completed a one-year course in Basic Glamour and Bridal Makeup before pursuing a career in pageants.

Prior to entering the world of beauty pageants, she also did some volunteer teaching while still in school. She is still pursuing her ambition of opening a pre-school to teach young children about values, ethics, and the importance of the environment.

Patricia Tumulak was an avid environmentalist as a student who wanted to make a difference. In 2009, she entered the Miss Philippines Earth contest because of her good beauty and modeling passion. The event aims to raise awareness about wildlife protection, and she believes it is the perfect venue for her to contribute to the cause. Nearly 50 other people from all throughout the country competed in the tough competition.

Patricia was named to the final ten participants in the final round of the competition, who would then participate in the final rounds. Patricia got good points in the swimsuit and evening gown rounds, and placed in the top five, owing to her strong stage presence and self-assurance. She didn’t win the competition, but she did receive the title of Miss Philippines Fire, which is the equivalent of third place.

By the end of the contest, she had already won the Miss Science and Technology title and had been proclaimed Miss Philippines Fire. Patricia was crowned by Kristelle Lazaro, the former title holder, and the occasion resulted in her becoming the talk of the town in San Juan and other parts of the Philippines.

Modeling projects began to stream in, and Patricia envisioned a bright future as a model. She competed in Binibining Pilipinas in 2011 and placed in the top 15 competitors. Patricia was one of the most popular contestants, despite the fact that she didn’t make it to the final five. She embodied the traits of a true beauty with intelligence and a golden heart.

Patricia later stated that she considered the Binibing tournament as a fantastic way to raise awareness about the HIV/AIDS epidemic, which is rife in her home country. Patricia appeared in a number of episodes, including ’24 Oras,’ ‘Walang Kapalit,’ ‘Calle Siet,’ and ‘Pagpapatawad,’ beginning in 2014.

No television appearance, however, would garner her the same level of popularity as ‘Eat Bulaga,’ the Philippines’ longest-running Noon Time Variety Show. Patricia joined the show as a co-host and was instantly appreciated and embraced by the crowd thanks to her outspokenness and fearlessness.

Patricia’s love life has been a closely guarded secret that she prefers not to discuss. However, the media’s infatuation with her has resulted in various tie-ins. Patricia has been linked to Alden Richards, although there has been no proof, and she claims that she is now unmarried and busy with her profession.

Patricia enjoys watching movies in her spare time and is a huge fan of Ashton Kutcher. She, too, is a photographer who spends the majority of her vacations snapping photos and sharing them on social media.

Patricia Tumulak’s estimated net worth is $ USD 1 million, according to online sources (Wikipedia, Google Search, Yahoo Search). Her primary source of income is as a beauty pageant participant and model. We don’t have enough information about Patricia Tumulak’s cars or lifestyle. These details will be updated as soon as possible.