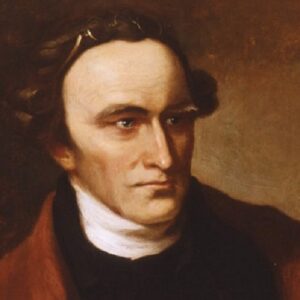 Patrick Henry was a great orator, a successful lawyer, a recognized statesman, and a planter who was one of the founding fathers of the United States of America. In the early 1760s, he began his career as a lawyer and earned a name for himself by appearing in the Parson’s Cause trial. He was elected to the Virginia House of Burgesses within two years, where he successfully directed the Virginia Stamp Act Resolutions. He quickly gained a reputation for his staunch opposition to British rule. He was highly regarded for his ability to explain his political views in a manner that the general public could comprehend. He is best known, however, for his speech before the Virginia Convention, in which he pushed his fellow delegates to join the war of independence in forceful but emotional language. Later, he became a colonel in the 1st Virginia Regiment and then Virginia’s first post-colonial governor. He first opposed the United States Constitution because he considered it did not address the rights of states as well as individual liberty, but ultimately supported President John Adams and played a key role in the drafting of the Bill of Rights.

Patrick Henry was born in the settlement of Studley in Hanover County, Virginia, on May 29, 1736. His father, John Henry, was a Scottish emigrant who attended King’s College in Aberdeenshire. He worked as a surveyor, a colonel, and a county court justice in Hanover.

Sarah Winston Syme, Patrick’s mother, was from a famous English lineage family in Hanover County. John Syme, who built and owned Studley, was her first husband. She married John Henry after he died, and the couple continued to live at Studley.

Patrick was the second of nine children born to his parents. Although he attended a local school at first, he was primarily educated at home by his father. His uncle, who is an Anglican clergyman, also gave him advice. Many people say he got his remarkable oratory ability from him. He started running a store for his father when he was fifteen, but the business quickly became unprofitable. He married Sarah Shelton in 1754 and began tobacco cultivation after acquiring 300 acres of farm land and six slaves as a dowry.

Patrick Henry worked with the slaves on the land for three years, but he was unsuccessful this time as well. Their main house was also destroyed in a fire in 1757. Following that, he began working in his father-in-tavern. law’s
He had a growing family to care for at this point, and his resources were running out. He chose to study law to close the gap. He was admitted to the bar in 1760 and acquired a substantial and successful clientele within a few years.

Patrick Henry first gained notoriety in 1763, when he was summoned to testify on behalf of Louisa County in the ‘Parson’s Cause’ trial. It was linked to the 1758 Virginia colonial legislature’s ‘Two Penny Act,’ which was later vetoed by the British monarch.

The act set the priests’ wages at two cents per pound of tobacco, effectively lowering their revenue. As a result, the clerics sued the County for back pay when the law was vetoed and won. In response to the priests’ claim, Henry defended the County.

He delivered an impassioned speech in which he called the clergy who challenged the law “enemies of the people” and begged the jury to pay them the smallest sum possible. He further argued that the king had forfeited his right to be obeyed by “disallowing Acts of this beneficent character.”

He invoked the doctrine of ‘natural rights’ while presenting the case. It wowed the jurors so much that they decided on one-penny damage in just five minutes.

He became well-known as a result of the trial, and in 1765 he was elected to the Virginia colony’s legislative assembly, the House of Burgesses. He introduced the historic ‘Virginia Stamp Act Resolutions’ just nine days after taking the oath.

It was connected to the British Parliament’s Stamp Act of 1765. The act imposed a direct tax on all printed materials in America, which the colonists despised. Some conservatives, on the other hand, were not opposed to it.
As a result, Henry tabled the resolution after the majority of conservative members had left the House. When the conservatives learned of it, they attempted to overturn it, but were unable to do so due to Henry’s adamant resistance.

Later, he delivered an excellent statement in the House, arguing that people had the right to be taxed exclusively by their own representatives under British norms, and that the British Parliament had no authority to levy any tax on the colonies.

In the end, Henry’s six resolutions were adopted in five of them. Furthermore, his speech, which was printed and given to the public, sparked public anger with British administration.

In March 1773, Henry, Thomas Jefferson, and Richard Henry Lee introduced a proposal in the Virginia House of Burgesses to establish a permanent Committee of Correspondents. Its objectives were twofold: to offer colonial leadership and to encourage inter-colonial cooperation.

Henry was enrolled as a member of the First Committee of Correspondents when it was created. Other colonies eventually created their own committees, which led to the foundation of the Continental Congress. In the 1774 and 1775 sessions, Henry was elected as a delegate.

Meanwhile, Royal Governor Lord Dunmore disbanded the House of Burgesses in 1774. Following that, the convention became a revolutionary temporary government that was held in secret. However, the members were undecided over whether or not they should raise military forces to counter British military measures.
The Second Virginia Convention, held on March 23, 1775, at Richmond’s Saint John’s Church, resolved the impasse. Patrick Henry made a powerful case for a military solution, concluding with the famous words, “Give me liberty or give me death.”

When the Royal Governor of the Colony of Virginia had the gunpowder removed from the magazine in Williamsburg on April 20, 1775, Henry led a small militia to recover the ammunition. As a result of the incident, he was promoted to colonel of the 1st Virginia Regiment in August 1775.

Henry, on the other hand, focused his efforts on beneficial projects. He became a founding trustee of Hampden–Sydney College in early November 1775, a post he held until his death.

He resigned as colonel on February 28, 1776, because the Commission of Safety was attempting to limit his power. He’d also realized that he wasn’t cut out for such occupations by this point.

Instead, as a member of the Virginia Convention in 1776, he was instrumental in the creation of the state’s first constitution. Later that year, after Virginia gained independence from British rule, Henry was elected as the state’s first post-colonial governor by the state legislature.

The position was only for a year, but he was re-elected twice, serving until 1779. During his time in office, he provided General George Washington with the necessary assistance in his struggle against the British.

He served as a member of the Virginia Assembly from 1780 to 1784, as the law of the land prohibited him from being selected to the position of Governor for more than three consecutive terms. During this time, he purchased land and began growing tobacco.

He was re-elected as governor of the state for the second time in 1784, and he served until 1786. During his reign, he gave the go-ahead for an invasion of the Illinois country. He was invited to attend the Constitutional Convention in Philadelphia in 1787, but he declined.

Henry was a strong supporter of state rights and feared that the unproven presidential system of governance would lead to monarchy. As a result, he argued against ratifying the US Constitution at the 1788 Virginia Convention, claiming that it gave the federal government too much power and failed to mention the Bill of Rights.

He reconciled only after the Bill of Rights was passed, and he was essential in its inclusion in the Federal Constitution. He continued to serve the state after that. Finally, in 1794, he retreated to his Red Hill farm in Brookneal, where he resumed his law career.

The federal government offered him a number of high-ranking positions, but he declined most of them due to his ailing health and family obligations. Henry consented to run for the state legislature again in 1799 because he wanted to oppose the Kentucky and Virginia resolutions, but he died before taking his position.

Although Henry was a key figure in the American Revolutionary War, he is most recognized for his speech to the Virginia Convention on March 23, 1775. It is thought that it was his speech that influenced the delegates’ decision to enter the war.

Patrick Henry married Sarah Shelton in 1754 and had six children with her. Sarah had unfortunately become mentally sick by 1771, and her condition rapidly deteriorated. Until her death in 1775, Henry took care of her as much as he could, bathing and feeding her.
He married Dorothea Dandridge on October 25, 1777, when she was twenty-two years old and he was forty-one. They had eleven children together.

On June 6, 1799, Patrick Henry died of stomach cancer at his Red Hill Plantation.
Today, monuments have been erected in his honor, and his Scotchtown farm has been designated as a National Historic Landmark. He has also had many places, schools, and ships named after him.

Patrick is one of the wealthiest war heroes and one of the most popular. Patrick Henry’s net worth is estimated to be $1.5 million, according to Wikipedia, Forbes, and Business Insider.