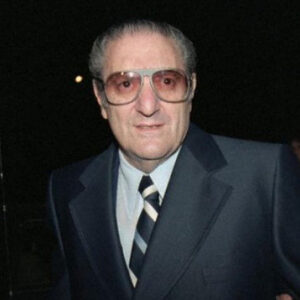 Paul Castellano was an American gangster and racketeer. He was the head of the Gambino crime family, which used to operate organized crime activities in New York City, and was known as ‘The Howard Hughes of the Mob,’ ‘Big Paul,’ ‘The Pope,’ and ‘The Chicken Man.’ He was apprehended by police during the Apalachin Conference. He was one of 61 high-ranking mobsters caught at the time. His lavish lifestyle later caused envy and resentment among the Gambino family. He dropped out of school in the eighth grade since he was the son of a butcher. He was well-known as a criminal for not disclosing the identities of his associates to the authorities. As a boss, he began to demand more money from prominent mafia figures. Apart from that, he forbade family members from running drug trafficking rings, despite the fact that he used to take enormous sums of money from the Cherry Hill Gambinos and the DeMeo group. He preferred to think of himself as a businessman first, even though he was a serious criminal. He was unconcerned with being referred to as a murderer. However, he felt insulted when he believed that police officers did not treat him as a gentleman. His assassination was carried out by John Gotti’s thugs.

Paul Castellano was the youngest son of Giuseppe Castellano, a butcher and part of the Mangano crime family, and Concetta. He was born in Brooklyn, New York City, United States.
Kathryn was his younger sister’s name. In the seventh grade, he dropped out of school to learn butchering and collect number game profits from his father.

He was arrested for the first time in Hartford, Connecticut, in July 1934, for robbing a haberdasher. He was sentenced to three months in prison for refusing to give the identities of his two accomplices during the crime.

He married into the Mangano family in 1940. He rose through the ranks of the Mafia family’s caporegime under his leader Albert Anastasia. Carlo Gambino became his boss after Anastasia’s murder in 1957.

He attended the Apalachin Conference at Apalachin, New York, this year. The American Mafia, an Italian-American criminal organization, met for the first time at this historic summit. The gathering was invaded by the New York State Police, who detained him.

He refused to tell the grand jury anything about the meeting while in police custody. As a result, he was sentenced to a year in prison for contempt.

On January 13, 1960, he was sentenced to five years in jail for conspiring to suppress information. However, in November of that year, an Appeals Court overturned his conviction.

He was instrumental in the founding of Dial Poultry, a poultry distribution company.
He began making a lot of money from construction concrete after gaining control in the Gambino family. He also used to manage the Gambino family’s commercial interests in the Concrete Club, a consortium.

He also oversaw Gambino’s involvement with the Teamsters Union. This group worked to provide workers to pour concrete at all of New York’s and Long Island’s major construction projects.
Carlo Gambino nominated Castellano to succeed him as his underboss in 1976, soon before his death. As a result, he was involved in a variety of criminal acts, including robbery, extortion, and loan sharking.

In 1975, authorities charged him with loan sharking after he became Carlo Gambino’s acting leader. He also allegedly failed to submit any information about the profits from his unlawful business and thereby dodged taxes, according to the police.

In 1975, he ordered the assassination of Vito Borelli, his daughter Constance’s boyfriend. Vito compared Paul to Perdue Farms’ owner, Frank Perdue. He made steps to end Vito’s life since he felt he had been disrespected.

He ordered the assassination of Nicholas Scibetta, a Gambino associate, in 1978 for his involvement in multiple public confrontations and insulting a female cousin of Frank DeCicco, the Gambino family’s underboss. He planned the assassination of Gambino Capo James Eppolitto and his gangster son the same year.

He was a key figure in Roy DeMeo’s assassination in 1983. He was aware of DeMeo’s cocaine addiction and used that knowledge to help him carry out his plan. DEMeo was discovered deceased in the trunk of his Cadillac.

Police charged him with extortion, narcotics trafficking, robbery, and prostitution the next year. He was apprehended by police in 1985 on charges of racketeering. He was later released on bond.

He married Nina Castellano and had three sons, Paul, Philip, and Joseph Castellano, as well as a daughter, Constance Castellano. Later, he started a romantic relationship with Gloria Olarte, his live-in maid.

On December 16, 1985, he was assassinated. An Italian-American mobster named John Joseph Gotti devised a scheme to assassinate him during a dinner gathering. With the support of a hit crew, Gotti was able to carry out his plan successfully. Castellano was shot multiple times by the gunmen.

Paul Castellano’s net worth: At the height of his power in the early 1980s, Paul Castellano had a net worth of $20 million, which is roughly $50 million now.

According to FBI documents, this infamous person ordered the death of his former son-in-law Frank Amato for physically abusing his daughter Connie Castellano. Amato’s body was known to have been hacked into pieces and thrown into the sea after he was murdered.

This well-known individual built a 17-room mansion in New York. This residence has an Olympic-size swimming pool, similar to the White House in Washington, D.C.