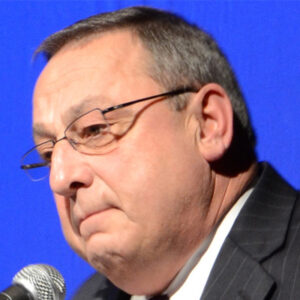 Maine’s 74th governor is Paul Richard LePage. He has been dubbed the “Dickensian boy” because of his horrible childhood experience, but he has turned his life around and is now at the helm of state administration. His story has made an indelible effect on the minds of Maine residents. Despite the fact that he has been involved in numerous disputes, many of which are racial in nature, it is claimed that his terrible childhood was the root of his outspoken and inflexible behavior. His story has inspired many people, from running away with 50 cents to founding LePage&KasevichInc. He served on the Waterville City Council for two terms before being elected Mayor. He has served as governor of Maine for two terms, winning the second time with a larger percentage of the vote. He has successfully effected change in Maine for the welfare of his people. During his administration, he has exercised his veto power a total of 188 times, the most by any governor. During the 2016 presidential election, Paul was a strong supporter of Donald Trump.

He was born in Lewiston, Maine, on October 9, 1948. Theresa Gagnon, his mother, and Gerard LePage, his father, were both French-Canadians. As a result, French is his first language.
Paul has struggled with poverty and an abusive father since he was a child. Gerard kicking him is, in fact, his first memory of his father. His father was a boozehound. On weekends, he drank heavily and worked from Monday to Friday.

Paul was one of seventeen children. Many of his brothers died, and he recalls tripping over his four-year-old brother’s body one night. He admired his mother’s efforts to keep the family afloat.
When his father got home intoxicated one night after an adulterous night, he assaulted Paul, fracturing his nose and jaw until a neighbor intervened. That night, his father gave him 50 cents and urged him to go to the local hospital to get his nose mended.

He took advantage of the situation and fled away from home with 50 cents in quest of a better life, vowing to never return to hell. He worked odd jobs like cleaning dishes and assisting truck drivers to pay for his studies.
He began working as a bartender, a short order cook, and at a rubber firm as he grew older. He struggled in school because he didn’t speak English and had primarily studied French in primary school.
Paul was adopted by the Collin and Myrick families, who ensured that he received an education and lived a disciplined life.

With the help of Olympia Snowe, he was able to gain entrance to Husson College in Bangor. His reading and writing abilities were tested on a French exam. He devoted a lot of effort to his studies and quickly learned the language.
He was named editor of the campus newspaper after quickly becoming the best English student in his class. During this time, he developed a strong interest in business and went on to study finance and accounting at the University of Maine, where he earned his’Masters in Business Administration.’

Following his master’s, he worked for a private consultant in Canada and Maine, providing executive, financial, and chief operating officer assistance to startups and established businesses, banks, trusts, and insurance firms.
Beginning in 1972, he worked for his first wife’s lumber company in Canada for seven years. He started working for Scott Paper in Maine in 1979.

Paul was hired as the general manager of Marden’s in the year 1996. He aided in the expansion of the company, which grew from six to fifteen locations.
He also founded his own firm, LePage & Kasevich Inc, at the same period. The organization was created to aid in the formation of new businesses that need financial and administrative assistance.

Paul, a City Councilor and Mayor, has built a solid profession for himself, unlike his other siblings, who have struggled to escape poverty and dread. He was elected to the City Council of Waterville for two years before being elected Mayor of Waterville in 2003.

He was mayor of Waterville for eight years. During his time in government, he made significant adjustments and improvements. He lowered annual taxes, firmly supported local education, improved the city’s credit rating, and increased the city’s ‘Rainy Day Fund’ from one to ten million dollars.

In 2009, Paul announced his candidacy for Governor of Maine. To help him communicate his tale, he used the “Three onlys” campaigning strategy to win the primary election.

He was the only candidate with an inspirational life story, therefore the “three onlys.” He is the only candidate with a track record of success as a CEO, and he is also the only contender with a profitable Maine firm.
Paul received a large number of votes in the gubernatorial election, when he was backed by local Tea Party members and defeated Independent contender Cutler by 7500 votes.

He signed a law in 2011 that aligned Maine’s education with the ‘Common Core’ school standards. He overturned the measure in 2013, citing concerns about a federal takeover and intervention in state education.
In 2013, he donated $10,000 from the contingency fund to a Portland foundation that was working to teach English to immigrants. Before making the announcement, Obama met with Somali immigrants.

In the 2014 gubernatorial elections, Paul ran for re-election as the incumbent governor. He defeated Democrat Mike Michaud with 48.2 percent of the vote, which is better than his 2010 vote of 38 percent.
With his ‘pro-life’, anti-abortion, anti-homosexual marriages, and opposition to any common core system of education, Paul reclaimed his seat after the election.

Everything was OK until he made a public pronouncement in January 2016 that many saw as racially motivated. With data from his binder, he claimed that the main drug dealers in most places of America were “blacks and Hispanics.”

Following the inflammatory remark, a daily reporter notified LePage that his Democratic opponent Drew Gattine had labeled Paul a racist. He then proceeded to make another heinous error by angrily insulting Gattine on voicemail.

Following the incident, many Democrats and a few Republicans protested to the governor’s disruptive behavior, with many calling for him to resign.

Fortunately, he was able to stay in office despite an impeachment attempt by Ben Chipman in the State House of Representatives, which was unsuccessful.

He made a significant contribution to American politics as Mayor of Waterville. He increased the Rainy Day Fund, reduced taxes, and constructed a city hall to host celebrations.

As Governor of Maine, he implemented the state’s largest tax decrease in history. He improved the state’s pension policy and provided funding for medical projects. He has advocated for the death sentence when a crime amounts to murder, particularly when it involves children.

Paul LePage won his first award in 2006 when he was named businessman of the year by the Mid-Maine Chamber of Commerce. The ‘National Federation of Independent Business’ awarded him the title of ‘Maine Business Champion’ the following year.

In 2012, he obtained a doctorate from Thomas College.
In 2003, the ‘Maine Suicide Prevention Program’ recognized his work in spreading suicide awareness.

Paul LePage married Sharon Crabbe in 1971, and their two daughters, Lisa and Lindsay, were born in 1975 and 1976, respectively. Paul LePage and Sharon Crabbe separated in 1980 after a short marriage that did not work out.
In 1984, he married Ann DeRosby for the second time. Paul and Lauren are the couple’s two children. To help support the family, Ann works as a waitress in Boothbay.

Raymond is his adopted son, whom he adopted from Raymond’s biological father in Jamaica. There are, however, no documents to substantiate his adoption.
He and his wife purchased a property in Boothbay for $215,000 and plan to live there after Paul steps down as governor.

Paul had bariatric surgery to decrease weight in the second week of January 2017, after his doctor warned him that if the weight was not managed quickly, he would develop diabetes.

Paul is the lowest-paid governor in America, earning only $75,000 a year, when the average salary is $135,000. As a result, his wife Ann accepted work as a server at a Boothbay restaurant to help support her family financially.

Paul LePage’s net worth is estimated to be $1-5 million at the age of 70, according to Wikipedia, Forbes, IMDb, and other online sources. As a professional politician, he earned the money. He’s from Maine.