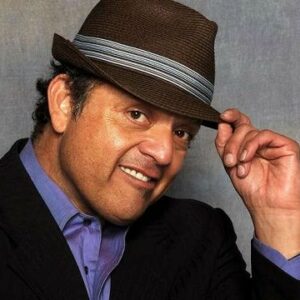 Paul Rodriguez is a stand-up comedian, actor, and product of Mexican and American culture. On Comedy Central’s list of the 100 Greatest Stand-up Comedians of All Time, he is listed number 74. After he had had his fill of the armed services, Rodriguez began his career as a comedian. He began by working as a doorman at the renowned Comedy Store in Los Angeles, a job that was simple for him to maintain given his upbringing in which he had to constantly struggle with money and rely on menial employment to survive. He began making brief television appearances, but it wasn’t until he made an appearance on “a.k.a. Pablo” that he received the well-deserved media attention. Over the course of his more than 20-year career, he has been in several television programs, movies, and specials, both in leading and supporting parts. Hispanic Scholarship Fund, Juvenile Diabetes Foundation, Elizabeth Glaser Pediatric AIDS Foundation, and other civic and educational organizations are among the organizations he works with. He also performs stand-up comedy, manages his own comedy club in West Hollywood called “Laugh Factory,” and works as an actor. He received the “Humanitarian of the Year Award” from the “City of Fresno” in recognition of his efforts.

Paul Rodriguez was born in the family of a large-scale Mexican farmer in Culiacan, Sinaloa, Mexico. He and his family immigrated to the United States in 1957 in search of better possibilities.
He was raised in East Los Angeles, close to the Watts neighborhood, and went to Roosevelt High School. Sadly, his father’s back injury forced Rodriguez to support the family by working as a fruit picker.

The entire family soon relocated to Compton, where Rodriguez attended Dominguez High School. It is said that he joined the Compton Varrio Setentas street gang while still a student at his school.

He made the decision to enlist, and after being accepted, he was assigned to military duty in Iceland. After coming home, he enrolled in college with the intention of becoming a lawyer.

In the end, Rodriguez decided against going into the law profession while attending Long Beach Community College and instead fell in love with stand-up comedy.

Rodriquez began working as a doorman at L.A.’s renowned The Comedy Store after deciding to pursue standup comedy as a career. He was seeking opportunities to hone his skills.
His first chance to showcase his comedic skills on film came in 1983 with the release of the film “D.C. Cab.” Joel Schumacher co-wrote and directed the controversial R-rated comedy.

After Norman Lear was impressed with his acting in “Gloria,” he was able to land his first major television role in “a.k.a. Pablo” in 1984. The stand-up comedian Paul Rivera and his Mexican-American family were the subject of the film “Pablo.”

Between 1986 and 1987, Rodriquez was successful in landing five roles, including one that was well regarded: Miracles for Orion Pictures, The Whoopee Boys for Paramount Pictures, Quicksilver for Columbia Pictures, and Born in East L.A. for Universal.

Rodriguez hosted “The Newlywed Game” in 1988 and participated in the program for one season before it was canceled. The Monotones’ 1958 song “Book of Love” served as the program’s theme music during his tenure.
Around this time, he was the host of Fox’s “Late Show,” which aired each night following Joan River. featured in the ephemeral sitcom “Trial and Error” and the CBS television movie “Grand Slam” in 1988.

El Show de Paul Rodriguez, a chat show for the Spanish-speaking audience of the Univision Network, was presented by Rodriguez between 1990 and 1994. It eventually attracted a global following.
His first picture as a director, “A Million to Juan,” came out in 1994. Rodriguez himself wrote and starred in this family comedy. The Million Pound Bank Note, a story by Mark Twain, was given a contemporary twist.

In the high-profile, high-budget biopic “Ali” from Columbia Pictures, he was cast as the outspoken fight doctor “Freddie Pacheco” in 2001. He made an appearance in the movie “Crocodile Dundee in LA” and had supporting parts in the movies “Rat Race” and “Tortilla Soup” that same year.

The Original Latin Kings of Comedy, a concert movie Rodriguez executive produced and starred in 2002, was released by Paramount Pictures and made by his own production firm, Payaso Entertainment.

Although it was a very short-lived television series, Rodriguez’s depiction of “Paul Rivera” in “a.k.a. Pablo” in 1984, which was created specifically for him, is remembered as a significant turning point in his life since it cemented his reputation as a gifted comedian.

In 1996, at the “Latino Laugh Festival,” Rodriguez earned an NCLR Bravo Award for “Outstanding Performance by a Male in a Variety or Music Series/Special.”
Rodriguez was given the “Humanitarian of the Year Award” by the “City of Fresno” in recognition of his tireless efforts on behalf of water conservation.

Professional skateboarder Paul Rodriguez Jr. is Rodriguez’s son. Lukas is the name of his other son.

American actor and professional street skateboarder Paul Rodriguez Jr. has a $6 million dollar net worth. In December 1984, Paul Rodriguez Jr., also known as P-Rod, was born in Tarzana, California. Paul Rodriguez, an actor, and comedian is his father. P-father Rod gave him a skateboard for Christmas when he was 12 years old.

Hispanic Scholarship Fund, Juvenile Diabetes Foundation, Elizabeth Glaser Pediatric AIDS Foundation, League of United Latin American Citizens (LULAC), The Leukemia Society, and others are among the charitable, civic, and educational organizations with which he is affiliated.

Rodriguez is a co-owner of the West Hollywood, California comedy club known as the “Laugh Factory.”