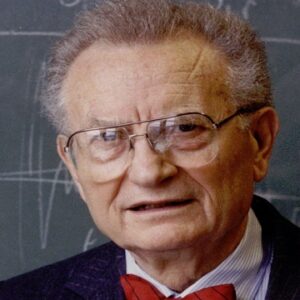 Paul Anthony Samuelson, an American economist, was awarded the Nobel Memorial Prize in Economic Sciences in 1970. He is known as the “Father of Modern Economics” for pioneering the integration of mathematics and economic theories. Prior to him, economics was taught largely on hazy derivations and verbal explanations. He used mathematics as a language to support economics’ theories and principles, establishing economics as a discipline that accommodated both logic and rationality. He began writing at a young age and went on to create multiple volumes, including the best-selling ‘Economics: An Introductory Analysis,’ which smashed all records and became the most widely recommended textbook for students all over the world. He’s also served as an adviser to a number of American presidents. Above all, he was an exceptional professor. His genuineness and genuine enthusiasm for the subject drew scholars and aspiring economists from all over the world to the Massachusetts Institute of Technology, where he spent several years. It has now grown to become the most prestigious institute for economic sciences, thanks largely to Paul Samuelson’s accomplishments.

During World War I, Paul Anthony Samuelson was born in Indiana on May 15, 1915, to a pharmacist father, Frank Samuelson, and a caring mother, Ella Lipton. His ancestors were Polish Jews who immigrated to the United States. He had a brother named Robert as well.

After the war, his father’s finances were severely strained, so Frank relocated to Chicago with his wife and sons in 1923 to seek better possibilities.

Paul Samuelson began his studies studying the financial market at Hyde Park High School, but it was at the University of Chicago that he was reborn as an economist.

He was just 16 years old when he enrolled at Chicago University, where he studied the works of renowned economists such Thomas Robert Malthus, who sparked his interest in the field. He went on to earn his Masters of Arts shortly after graduation in 1935, when his passion for the subject grew even stronger. A year later, in 1936, he received his master’s degree.

In order to satisfy his hunger for further economic information, he enrolled at Harvard University, where he investigated and later launched his own theories and studies, earning a Ph.D. in 1941.
He was advised by the top economics experts at Harvard, including Joseph Schumpeter, Wassily Leontief, Gottfried Haberler, and Alvin Hansen.

He created a reputation for himself while still in school with his thesis, “Foundations of Analytical Economics,” which won him the “David A. Wells” medal for the most thorough and well-written doctoral dissertation.

As an Economics Professor

In 1941, he accepted an offer from Massachusetts Institute of Technology and was immediately employed as an assistant professor after completing his Ph.D. at the age of 25.

In 1944, he was appointed to the Radiation Laboratory, where he created computers to track aircraft and taught part-time at the Fletcher School of Law and Diplomacy about international economic relations. He had been hired as a full-time professor at the Massachusetts Institute of Technology by the age of 32. Around this time, he was also appointed to the National Resources Planning Board, as well as the War Production Board and the Office of War Mobilization and Reconstruction, as advisors and consultants.

The International Economic Association elected Paul Samuelson as its president in 1965. At the Association, he was in charge of teaching and interpreting Keynesian economics to key officials of the American government, such as presidents, the Federal Reserve Board, and a few members of Congress.
He had understood Keynesian economics, which concerned the amount of influence that aggregate demand had on a country’s economic performance during a recession. He didn’t agree with all of the principles, but he didn’t see why any of them should be rejected.
As a result of this understanding, he extended his service as a member of the President’s Council of Economic Advisers to Senator and eventually President John F. Kennedy, giving proposals and recommendations on tax cuts to keep repression at bay.

Paul Samuelson was named an Institute Professor in 1966, which was the highest honor bestowed upon a faculty member in Massachusetts. From the late 1960s until the 1980s, he had regular disagreements with Milton Friedman, a fellow economist at the University of Chicago.

Both were talented orators and writers who frequently debated in public forums and magazine pieces such as ‘Newsweek.’ While Samuelson was a liberal economist, Friedman was a conservative who opposed the government’s involvement in the economy.

While Friedman argued that private businesses produce better results for the economy, Samuelson took a more Keynesian approach to his disputes. Despite this, the two respected and admired each other.

Prior to Paul Samuelson’s arrival on the scene, there was a significant gap between economic theories and their application. He could see through the fractures and decided to fill them. He sought mathematical principles in economics during the Great Depression to bridge the gap between theories and operations, making economics more practicable.

He emphasized practical economics and the use of analogous approaches to establish operational theorems in his work, ‘Foundations of Economic Analysis,’ which was based on a thesis he wrote at Harvard University.
His first book, ‘Economics: An Introductory Analysis,’ was praised by economists all around the world, but it was his second book, ‘Economics: An Introductory Analysis,’ that was lauded in 1948.

The book included direct allusions to John Maynard Keynes’ ideas, and it was written to address recurrent economic blunders. It was printed in over 30 languages, including French, Slovak, Chinese, German, Dutch, Polish, Vietnamese, Hebrew, and Arabic, and became a popular textbook due to its concise and straightforward drawings. Over 4 million copies have been sold.

Samuelson developed the ‘Multiplier-accelerator Model,’ which examined business cycles based on market fluctuations, customer behavior, and economic stability, with influence from Keynesian economist Alvin Hansen.
He was also a notable co-editor of ‘Inside the Economist’s Mind,’ which was published in 2007 with William A. Barnett and featured candid interviews with leading economists.

In 1941, he was awarded the ‘David A. Wells Award’ for his outstanding thesis at Harvard University.
He was awarded the John Bates Clark Medal in 1947, recognizing him as the only reformatory economist under the age of 40. The medal was given to him in recognition of his significant contribution to the field of economics.

The SverigesRiksbank Prize in Economic Sciences in Memory of Alfred Nobel was awarded to Paul A. Samuelson in 1970 “for the scientific work through which he has established static and dynamic economic theory and actively contributed to elevating the level of analysis in economic research.” It praised him for the years of effort and research he put into producing not merely utilitarian theories, but also concrete responses to authentically validated queries.

Paul Samuelson was a very active and vibrant professor when he was in the prime of his career. With much zeal and liveliness, he used to elucidate theories that he had invented. He was also concerned about the ‘female wage gap’ in the United States.

Marion Crawford, a classmate of Samuelson’s, married him in 1938. The couple had a total of six children, the last three of whom were triplet males. In chronological order, his children’s names are Jane, Margaret, William, Robert, John, and Paul.

Marion died in 1978 and was then married to Risha Clay Samuelson, with whom he had no children. Samuelson died on December 13, 2009, at the age of 94, after a brief illness.
He is known for his work on macroeconomics and neoclassical Synthesis, and has left a legacy of various theorems and models that promote pragmatism in economics.

Paul Samuelson’s estimated net worth is $ USD 8 million, according to online sources (Wikipedia, Google Search, Yahoo Search). His primary source of income is as a university professor and economist. We don’t have enough information about Paul Samuelson’s cars or lifestyle. These details will be updated as soon as possible.

He would pick only 20 students for the advanced mathematical economics course from the 200 or more students that applied each year to the ‘Massachusetts Institute of Technology.’
In an interview for his book ‘Economics,’ he remarked that economists who do not use mathematical representation in economics are the equivalent of “highly-trained athletes who have never ran a race.”