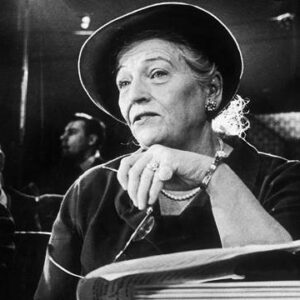 Pearl S. Buck, also known as Pearl Comfort Sydenstricker, was an American author best known for writing the top-selling novel ‘The Good Earth,’ for which she won the Pulitzer Prize. Though she was born in the United States, she spent nearly half of her life in China and was raised bilingually. She is also known as Sai Zhenzhu in Chinese. She was a prolific writer who released her first novel at the age of 39 and went on to create over 70 other works in a variety of genres. Buck picked China as the backdrop for most of her works. Her first work, ‘East Wind, West Wind,’ dealt with cultural understanding and acceptance, while her second novel, ‘The Good Earth,’ was set in a Chinese town before World War II and focused on the life of a family. “For her rich and genuinely epic portrayals of peasant life in China and for her biographical masterpieces,” she received the Nobel Prize in Literature in 1938. Novels, biographies, poetry, fiction, non-fiction, drama, and children’s literature were among her works. She was also a humanitarian with a passion for causes such as women’s rights, adoption, cultural values, immigration, and missionary work. She founded ‘Welcome House,’ an international, interracial adoption service that has placed thousands of children in loving homes to date, as an adopted mothers.

Caroline Stulting and Absalom Sydenstricker raised Pearl Sydenstricker in West Virginia. Her parents were both Presbyterian missionaries who married and moved to China. She was one of her parents’ seven children, only three of whom lived to adulthood.

She was raised bilingually, receiving instruction in both English and Classical Chinese. She was an avid reader when she was a child.

She attended Randolph-Macon Woman’s College in Virginia and graduated Phi Beta Kappa in 1914. She was also a Presbyterian missionary for a time but withdrew after some controversy.

From 1920 through 1933, she returned to China and taught English literature at Nanking University and National Central University.

In the 1920s, she began producing short tales and articles for publications such as ‘Nation,’ ‘The Chinese Recorder,’ and ‘Atlantic Monthly.’ She’d also started writing her first novel, ‘East Wind, West Wind,’ which came out in 1930.
She spent a brief period in the United States in 1924, earning a Masters’s degree from Cornell University. She returned to China in 1925.

The political situation in China deteriorated in 1927, and several Westerners were killed. She took refuge in Japan for a year before returning to China.

She now devotes all of her spare time to writing and finishing the book for ‘The Good Earth’ in less than a year. The work was first published in the United States in 1931 and quickly became a hit. In 1933, the sequel to the novel, ‘Sons,’ was published.

She left China permanently in 1933 and relocated to the United States. She continued her education at Yale University, earning a master’s degree.
She wrote ‘A House Divided,’ the sequel to ‘Sons,’ in 1935. The ‘House of Earth trilogy consists of three novels: ‘The Good Earth,’ ‘Sons,’ and ‘A House Divided.’

Following the success of her novels, her career took off, and she wrote prolifically over the next few years, releasing one or even two novels per year. In 1938, she published ‘This Proud Heart,’ followed by ‘The Patriot,’ ‘Other Gods,’ and ‘China Sky’ (1941).

Her novel ‘The Good Earth,’ published in 1930, became a smash seller in the United States and won the Pulitzer Prize in 1932. The plot centers around the existence of a Chinese family prior to World War II. Broadway plays and a film have been based on the novel.

In 1932, the sequel to ‘The Good Earth’ was published. It was titled ‘Sons,’ and it dealt with how an elderly man’s sons manage his estate after his death.

Her 1941 novel, ‘China Sky,’ explores themes of love, honor, and betrayal set against the backdrop of the Japanese invasion of China. In 1945, a film based on the novel was released.

‘The Big Wave’ (1948) is a children’s novel about an orphaned kid who heroically endures many hardships and eventually finds love and happiness.

In 1932, she won the Pulitzer Prize for fiction for her work “The Good Earth.” Buck received the award for her novel life in a Chinese town, which is unusual because the award is usually given to an American author for distinguished fiction dealing with American life.

“For her rich and genuinely epic portrayals of peasant life in China and for her biographical masterpieces,” she received the Nobel Prize in Literature in 1938.

In 1917, she married agricultural economist John Lossing Buck. They had one birth and one adopted daughter, one of whom was profoundly mentally challenged. In 1935, the couple divorced.

In 1935, she married Richard Walsh, an editor. Six more children were adopted by the couple. Their love marriage lasted until Richard’s death in 1960.

In 1949, she founded Welcome House Inc. (now part of the Pearl S. Buck International) to promote international, interracial child adoption—the world’s first of its type. Thousands of children have been placed in loving families around the world thanks to the facility.
In 1973, she died of lung cancer at the age of 80.

Pearl is one of the wealthiest novelists and one of the most well-known. Pearl S. Buck’s net worth is estimated to be $1.5 million, according to Wikipedia, Forbes, and Business Insider.

She was the first woman from the United States to win the Nobel Prize for Literature.
The Sai Zhenzhu Memorial House was built on the site of her previous house at Nanjing University.

She was a pioneer in interracial adoption, having adopted two children from different races in the 1940s when this was nearly unheard of.
In 1983, the United States Postal Service produced a postage stamp in her honor.