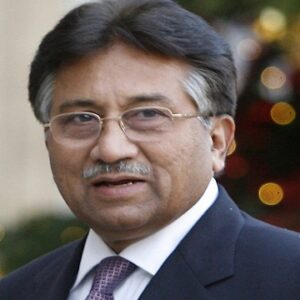 Pervez Musharraf is one of Pakistan’s most divisive political personalities. He seized power after deposing the elected prime minister, Nawaz Sharif, in a coup. His rule, known as the harsh taskmaster, has received mixed responses from the populace. He resurrected the economy, lowered the country’s foreign debt, and substantially cut poverty levels, putting the country on the path to wealth and growth. He also provided broadcast and internet media the opportunity to grow and evolve at their own pace. These initiatives, however, did not sit well with the fundamentalists who opposed his reign. His alleged involvement in the Kargil conflict, the Lal Masjid incident, and the killing of former PPP leader Benazir Bhutto drew widespread condemnation. It’s worth noting that this four-star general and politician rose through the ranks of the military to become the country’s leader. He began his career as a second lieutenant and pushed his way up the ranks through hard work and determination. He was promoted to Chief of Army in 1998. He positioned himself as President of Pakistan the next year by a military coup d’etat. Browse the following lines to learn more about his life and background.

Pervez Musharraf was born in British-ruled India parents Syed and Zarin Musharraf. Due to the imminent partition of India, he and his family fled to Pakistan four years later.

His father, who had previously worked for the Indian government, joined the Foreign Ministry of the newly founded Pakistan government. His first assignment was in Turkey, and he and his family relocated to Ankara in 1949.
Pervez Musharraf attended at Saint Patrick’s School in Karachi after returning to Pakistan in 1957, and then graduated from Forman Christian College University in Lahore.

He enrolled in the Pakistan Military Academy in 1961 and finished with a Bachelor’s degree in 1964.

He began his military career as a second lieutenant in an artillery regiment along the Indo-Pak border. During the 1965 Indo-Pak War, he was first on the battlefield. His unwavering tenacity, drive, and valor helped him get admission to the Special Forces School.

In 1974, he was promoted to Lieutenant Colonel, and after four years, he was promoted to Colonel. He attended at the National Defense University (NDU) to study political science in the 1980s. Later in his career, he taught at the Command and Staff College and NDU.

In 1987, his experience in mountain and polar combat helped him get a job as a Brigade Commander for a new SSG brigade near the Siachen glacier.

He afterwards travelled to the United Kingdom to study at the Royal College of Defense Studies in 1990-91.
He was elevated to Major General upon his return to Pakistan. He worked closely with top officials and quickly rose through the ranks of Benazir Bhutto’s office. Bhutto wielded significant political clout over him and even mentored him.

He last served in a military field operation in Mangla before being promoted to Lieutenant-General in 1995, a three-star level. As his position grew higher, so did his political activity.

In 1998, Prime Minister Nawaz Sharif appointed him as Army Chief of Staff and Chairman of the Joint Chiefs of Staff Committee, elevating him to the four-star level.

Due to the Kargil War, the year 1999 left an indelible blemish on his scaling career graph. The operation he prepared under PM Nawaz Sharif garnered widespread condemnation, criticism, and enmity from the general population and nations all over the world. Pakistan suffered a tremendous humiliation as a result of the war, which resulted in a loss of status and morale.

Nawaz Sharif replaced Musharraf with Khwaja Ziauddin on October 12, 1999, when he returned from an official visit to Colombo, Sri Lanka. The move backfired, and Musharraf used a coup to remove Nawaz Sharif from power. Later, Sharif was exiled to Saudi Arabia.

He announced a state of emergency and assumed control as the Chief Executive on October 15, 1999. Rafiq Tarar, the then-President, served until 2001, when he formally appointed himself as President.
He issued Oath of Judges Order No. 2000 shortly after taking power, requiring judges to take a new oath of office professing devotion to the military.

He partnered with America in the war against terror after assuming the presidency. Islamic fundamentalists, on the other hand, mocked the move.

In 2002, he called nationwide elections as ordered by the Supreme Court. The pro-Musharraf party PML-Q gained a high number of seats in the elections, albeit it did not win a clear majority. With the MMA and MQM, the PML-Q formed a coalition government.

The Prime Ministership was awarded to Zafarullah Khan Jamali. Jamali’s incompetence, on the other hand, led to the appointment of Shaukat Aziz. Musharraf entrusted Aziz with executive authority because he trusted him. Pakistan’s economy grew under Aziz’s administration, which benefited both parties.

His legislators enacted a bill in 2004 that gave him powers as both the Chief of the Army and the Head of the State.
He passed the Women Protection Bill in 2006, which provided better protection to rape victims than the previous law, which required them to present eye witnesses for the crime or face adultery. His statements on the 2005 rape case of Dr. Shazia Khalid, a Pakistani physician, highlighted his double-dealing nature.

During his leadership, the country was engulfed in a series of highly publicized atomic scandals. The first was the Taliban’s connections with senior nuclear experts Sultan Bashiruddin Mahmood and Chaudhry Abdul Majeed, and the second was Abdul Qadeer Khan’s role in nuclear proliferation.

His popularity dwindled as he faced widespread domestic criticism and public outrage as his reign drew to a close. As a result, despite his re-election in 2007 and subsequent appointment as army chief and state head, members of the elite class opposed his enthronement.

He announced a state of emergency, suspending the constitution and shutting down all private media outlets that were critical of his administration. On November 28, 2007, he resigned from the military in order to alleviate the rising pressure and criticism.

Following the PPP’s nomination of Syed Yusaf Raza Gillani as Prime Ministerial candidate and the possibility of impeachment, in which he would face corruption and murder allegations, he resigned as President on August 18, 2008. He went into self-imposed exile in London the next month.

He founded his own political party, the All Pakistan Muslim League, in 2010 and appointed himself the party’s President. He expressed his desire to become more involved in Pakistani politics in the future.

He returned to Pakistan on March 24, 2013, after a four-year absence to vote in the 2013 general elections. However, the election tribunal ruled that he was ineligible to run. He was also placed under home arrest. He was also accused of being a key figure in the death of Benazir Bhutto and the Lal Masjid Operation.

Pervez Musharraf is a $2 million-wealthy Pakistani politician and retired army general. Pervez Musharraf was born in August 1943 in Delhi, Punjab Province, British India. He was the 10th President of Pakistan and a four-star general in the Pakistan Army.

From 2001 until 2008, this Pakistani politician served as the country’s President. In 2001, he was seen performing with the rock band Junoon, demonstrating his passion for music.