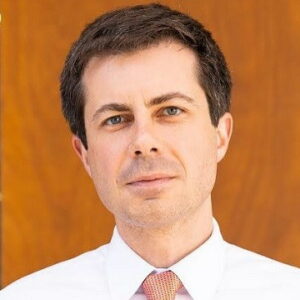 Pete Buttigieg is the mayor of South Bend, Indiana, and is a member of the Democratic Party in the United States. Buttigieg, who has been interested in politics since he was a child, was honored by members of President John F. Kennedy’s family for a stunning essay he wrote during his senior year of high school. He was chosen as an Indiana delegate to the ‘United States Senate Youth Program’ shortly after. After that, he went to Harvard University and received a BA in Literature and History. He also worked for Jill Long Thompson’s congressional campaign around this time. Following his graduation, he began working for William Cohen, the former Secretary of Defense of the United States. He was also a part of John Kerry’s presidential campaign in 2004. Buttigieg was commissioned as a naval intelligence officer in the ‘Navy Reserve’ shortly after. He served in the Middle East for several months and was a veteran of the Afghanistan war. After being elected Mayor of South Bend in November 2011, he took office the following year, making him the youngest Mayor of a city with a population of at least 100,000 people in the United States. Buttigieg announced his candidacy for President of the United States in 2020 in April 2019. In 2021, he was appointed Secretary of Transportation of the United States.

Joseph A Buttigieg and Jennifer Ann Montgomery had Peter Paul Montgomery Buttigieg on January 19, 1982, in South Bend, Indiana.
He attended ‘St. Joseph High School,’ where he was honored by former President JF Kennedy’s family for a prize-winning essay he authored as part of the ‘Profiles in Courage Essay Contest’ during his senior year. He was also named to the ‘United States Senate Youth Program’ as an Indiana delegate. He received his diploma in the year 2000.
Later, he attended Harvard University, where he was elected president of the ‘Harvard Institute of Politics Student Advisory Committee.’ In 2004, he received his BA in Literature and History. In 2007, he graduated from the ‘University of Oxford’ with a first-class honors degree in Philosophy, Politics, and Economics.

Pete Buttigieg began working as an investigative intern at ‘WMAQ-TV’ during his undergraduate years. He was also an intern for Jill Long Thompson’s congressional campaign in 2002 and a campaign adviser for her governor campaign in 2008. He served as a conference director for William Cohen, the former US Secretary of Defenseinternational ,’s strategic consulting firm from 2004 to 2005.

From 2007 until 2010, he worked as a consultant at ‘McKinsey and Company,’ a management strategy consulting firm. In 2010, he ran for Indiana State Treasurer as a member of the Democratic Party.

After being commissioned as a naval intelligence officer in the ‘Navy Reserve’ in 2009, Buttigieg also served in the military for a few years. In 2014, he served in Afghanistan for seven months before returning to South Bend. He was awarded the Joint Service Commendation Medal for his anti-terrorist efforts.
On November 8, 2011, he was elected Mayor of South Bend. On January 1st of the following year, he took office as the youngest Mayor of any US city with a population of at least 100,000 people.
During his presidency, he is noted for making redevelopment a primary priority. The ‘1000 Properties in 1000 Days’ campaign is one of his hallmark initiatives. It was a city-wide operation to restore or demolish specific properties. The target was eventually accomplished by the deadline. Deputy Mayor Mark Neal took over his responsibilities while he was serving in Afghanistan as a lieutenant in the ‘Navy Reserves.’
In 2013, ‘GovFresh.com’ named Pete Buttigieg ‘Mayor of the Year.’ He was named ‘The Most Interesting Mayor You’ve Never Heard Of’ the following year. ‘ The New York Times also ran a piece complimenting his work and speculating on whether he might ever be elected as the country’s first gay president.
He stated in November 2014 that he would seek re-election to a second term as mayor. On November 3rd, 2015, he was re-elected Mayor of South Bend after receiving more than 80% of the vote.
Buttigieg announced his candidacy for the Democratic National Committee chairmanship race in 2017. He dropped out of the candidacy on election day, saying, “I’m not going to be the next chair.” He officially launched his candidacy for President of the United States in 2020 on April 14, 2019. In 2021, he was appointed Secretary of Transportation of the United States.

Buttigieg sparked outrage when he removed Darryl Boykins, South Bend’s first African-American police chief, and police communications director Karen DePaepe after they were revealed to be engaged in a case of tapped phone conversations involving four white cops that allegedly contained racist language.
His handling of a civil rights matter drew national notice in 2016. Three South Bend police officers were accused of abusing an African American youngster for committing a crime he did not commit. Despite the fact that Buttigieg’s government offered the boy’s family $15,000, the family declined. The officers were found guilty by a jury after the case went to trial.
After the death of an 11-year-old kid called Tristan Moore in an accident in which he was hit by a pickup vehicle while walking to school, his ‘Smart Streets initiative’ sparked controversy. Buttigieg, on the other hand, denied that the project was to blame for the catastrophe.
Buttigieg also made headlines in June 2019 when a white South Bend cop shot and killed an African-American man who was allegedly stealing into automobiles downtown. Buttigieg dropped out of the presidential race and told outraged activists at a town hall meeting that he would seek an independent probe.
Pete is pro-choice and voted against a Senate bill that would prohibit abortion beyond 20 weeks of pregnancy. “Trust women to make these decisions,” he said.

In 2013, ‘GovFresh.com’ named Pete Buttigieg ‘Mayor of the Year.’
In 2014, he was named a ‘Rodel Fellow’ at the Aspen Institute. Buttigieg was awarded the John F Kennedy New Frontier Fenn Award in 2015.

Pete Buttigieg is a gay man. In an essay published in June 2015, he revealed his sexual orientation. He is also the first out gay executive in Indiana.
He is a devout Christian who worships at the ‘Episcopal Church’ on Sundays.
In South Bend, he gave a TEDx talk on urban innovation, which was well received. Pete announced his engagement to Chasten Glezman, whom he met through a dating app, in December 2017. On June 16, 2018, they married in a private ceremony at the ‘Cathedral of St. James.’ Buttigieg has stated that he supports the legalization of marijuana.

Pete Buttigieg has a net worth of $250 thousand.