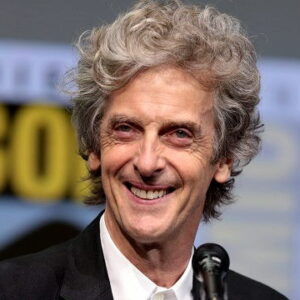 Scottish actor, director, and author Peter Dougan Capaldi is well-known for playing the title role in the twelfth iteration of the British science-fiction television series “Doctor Who.” The British comedy television series “The Thick of It,” in which the actor played “Malcolm Tucker,” is another of his well-known roles. Peter Capaldi participated in a number of schools plays as a child with the goal of becoming an actor one day. He started off on television with little parts before branching out into movies. The seasoned performer currently boasts more than a hundred acting credits in addition to a sizable number of directing and writing credentials. In movies and television productions including “John and Yoko: A Love Story,” “Franz Kafka’s It’s a Wonderful Life,” “The All New Alexei Sayle Show,” “The Lair of the White Worm,” “Big Fat Gypsy Gangster,” and “World War Z,” the Academy Award winner gave some of his best performances. In addition to acting, he is a supporter of Worldwide Cancer Research and has a strong interest in philanthropy.

Gerald John Capaldi and Nancy Capaldi welcomed Peter Capaldi into the world on April 14, 1958, in Glasgow, Scotland. In Glasgow, his parents owned and operated an ice cream shop.

Prior to attending St Matthew’s Primary School in Bishopbriggs, he attended St Teresa’s Primary School in Possilpark. Additionally, he went to Kirkintilloch’s St. Ninian’s High School before eventually earning his degree from the Glasgow School of Art.

At the age of 16, Peter Capaldi participated in the theater production of “An Inspector Calls” at the Fort Theatre in 1974. Later, in 1982, he made his acting debut as “Joe” in the movie “Living Apart Together.” Following that, he made appearances in movies including 1983’s Local Hero and 1984’s Bless My Soul as well as television programs like Crown Court, Travelling Man, and The Personal Touch.

He portrayed George Harrison, the illustrious member of the iconic music band “The Beatles,” in the 1985 film “John and Yoko: A Love Story.” He had an appearance as “Ozzie” in an episode of “Minder,” a British comedy-drama about the criminal underground in London, in the same year (“Life in the Fast Food Lane”).

Alongside Amanda Donohoe, Hugh Grant, and Catherine Oxenberg, he performed the pivotal part of Angus Flint in the British horror movie “The Lair of the White Worm” in 1988. In the same year, he also appeared as “Azolan” in the American historical drama film “Dangerous Liaisons,” which was based on Christopher Hampton’s play “Les liaisons dangerous.”

He made numerous appearances on television and in movies over the course of the following ten years, including “Shadow of the Noose,” “The Ruth Rendell Mysteries,” “Agatha Christie’s Poirot,” “December Bride,” and “The Cloning of Joanna May.” In 1992, he took on the extremely difficult role of a secretly gay man named “Luke Wakefield” in the BBC drama series “Mr. Wakefield’s Crusade.”

In 2005, Armando Iannucci’s British comedy television series “The Thick of It” cast Peter Capaldi in the starring character of “Malcolm Tucker.” Alastair Campbell, Tony Blair’s right-hand man, served as the inspiration for his character Malcolm. According to certain claims, Harvey Weinstein served as the model for Capaldi’s creation of this character. He performed in the show for more than seven years, earning praise and admiration from both the critics and the crowd.

He made several television appearances as a result of his rising fame before landing the greatest role of his acting career in 2013. He received a contract to play the twelfth iteration of “The Doctor” on “Doctor Who.” Peter Capaldi was overjoyed to be cast as the show’s titular character because he has always loved the long-running British science fiction television series. Between 2013 and 2017, he took on the job, winning the GQ Men of the Year Award for “TV Personality of the Year.”

Franz Kafka’s It’s a Wonderful Life, a BBC Scotland short film from 1993, was written and directed by Peter Capaldi. For his remarkable effort, he received numerous honors, including the BAFTA Film Award for “Best Short Film” and the Academy Award for Best Live Action Short Film.

His first prominent television appearance was as “Malcolm Tucker” in the Armando Iannucci-produced series “The Thick of It.” He received numerous honors for his outstanding portrayal of the comedic role, including the British Comedy Award for “Best TV Comedy Actor,” the Broadcasting Press Guild Award for “Best Actor,” and the BAFTA TV Award for “Best Male Comedy Performance.”

Elaine Collins, an actress, and author, and Peter Capaldi were married in June 1991; they had a child together.
He is interested in a number of social causes and starred in a UNHCR (United Nations High Commissioner for Refugees) video with Keira Knightley, Juliet Stevenson, Kit Harington, and Cate Blanchett to raise awareness of the world refugee situation. Additionally, he collaborates with Worldwide Cancer Research and the Aberlour Child Care Trust.

Scottish actor, author, singer, and filmmaker Peter Capaldi has a $10 million fortune. The two roles that have made Peter Capaldi the most well-known are those of Malcolm Tucker on the BBC television program “The Thick of It” and the 12th Doctor on “Doctor Who.”