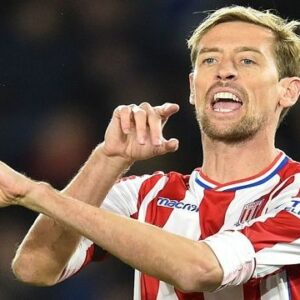 Peter Crouch is a well-known English football player who competes for both the England national team and the English Premier League club Stoke City. He is one of the all-time most expensive British footballers. He is one of only 26 players who have scored 100 “Premier League” goals. Peter began playing football in the youth league of the team “Tottenham Hotspur” and was signed by the same club in July 1998. He was bought by the “Premier League” team “Aston Villa” in March 2002, and in 2004 he transferred to “Southampton.” He moved to Liverpool in 2005, and after playing there for two seasons, he spent one season with Portsmouth. He returned to “Tottenham Hotspur” in 2009, then in 2011 he ultimately joined “Stoke City,” where he is still playing today. He was voted “Player of the Year” after his outstanding performance in his debut season with “Stoke City,” which helped to justify his club-record transfer fee of 10 million pounds.

On January 30, 1981, Peter James Crouch was born into an upper-middle-class British family in Macclesfield, Cheshire, England. When Peter was a year old, his family relocated to Singapore for his father’s job in advertising. The family came back to England after spending three years in Singapore after his father turned down a job offer to work in Australia.

Peter grew up in Wembley, a neighborhood that was very passionate about football, and he also caught the football bug. Being little and frail and having low self-confidence kept Peter from participating in the game for the most part, but his passion for it led him to become a ball boy. His parents thought he was highly excited about his work as a ball boy at Stamford Bridge.

He made the decision to play the game and joined his school’s squad when he was in middle school. He developed into a master of head goals, and after establishing himself at the collegiate level, he began looking into professional training. While he waited to earn a professional contract with “Tottenham Hotspur,” Peter participated in the youth program for a while and underwent hard training.

When ‘Tottenham Hotspur’ offered him his first professional contract in 1998, that was the moment to celebrate. He had been signed by the club, but he wasn’t put on the team right away; instead, he was loaned out to smaller clubs to get some playing time. He was moved to Queen Park Rangers, a first-division team, without ever having played a game for “Tottenham.”

Peter took advantage of the chance and played admirably in his first few games for the “Queen Park Rangers.” Peter scored 10 league goals for “Queen Park Rangers” in the 2000–01 season. For the 2001–2002 season, “Queen Park Rangers” leased him to “Portsmouth” due to financial difficulties. Graham Rix, the team’s manager, described him as a highly competitive player after he scored 18 goals in 37 appearances.

Peter was successfully acquired by “Ashton Villa” in 2002, but after a lackluster showing, he was loaned out to smaller clubs before Ashton ultimately opted to transfer him to “Southampton.” In 33 games for “Southampton,” he scored 16 goals in the 2004–05 season.

When “Southampton” was ultimately kicked out of the “Premier League,” Peter was sold to “Liverpool.” He made his Liverpool debut in the 2005–06 campaign, but he got off to a terrible start as he failed to score a goal in his next several games. He scored his first goal against “Wigan Athletic” in December, and a few minutes later, he added another. Peter’s goal gave Liverpool its first victory over Manchester United in more than 60 years during a “FA Cup” encounter with the Red Devils.

Peter became “Liverpool’s” standout player during their “FA Cup” victory; they beat “West Ham United” in the finals. He also made sure his squad won the 2006 “FA Community Shield” championship. Due to a string of injuries and the club management’s ignorance, Peter made the decision to return to “Portsmouth” in July 2008. During the 2008–09 season, Peter played 46 games and scored 16 goals.
Peter was bought by Tottenham Hotspur from Portsmouth in July 2009 under a five-year contract. Peter’s performance for “Hotspur” in the 2009–10 season was at an all-time high, and he contributed two hat-tricks to the squad.

He was acquired by “Stoke City” in August 2011 and signed a four-year contract. At the start of the 2012–13 season, he scored five goals in the first seven games. His team finished the season in 13th place overall, with a total of eight goals scored by him.

Peter didn’t make the starting lineup for the first few months of the 2013–14 season, but after making a comeback in October, he scored ten goals in 38 games to take over as his team’s leading scorer. His agreement was renewed by two more years in January 2015.

Following his hat trick against “Stevenage” in August 2016, a new contract was agreed upon, keeping Peter with the team through 2018. In his first five games of 2017, Peter scored four goals, and by the end of the 2016–17 campaign, he had tallied 10 goals in 29 appearances.

Peter played football for numerous British youth teams. In the 1999 “FIFA World Youth Championship,” he represented England. He also competed for his country’s Under-21 team in 2002, when they advanced to the finals of the “European Under-21 Championship.”

Numerous nicknames have been given to him by his admirers and comrades. Because of the way he celebrates when he scores a goal, he is frequently referred to as “Crouchy” and “RoboCrouch.”
Model Abbey Clancey and Peter had a committed relationship for many years. In July 2009, they announced their engagement, and they wed in June 2011. Together, they are parents of two sons and a girl.

In November 2011, Peter received a fine for exceeding the speed limit, and in October 2012, his driving privileges were revoked for six months.
Walking Tall- My Story is the title of a book written by Peter.

Crouch, Peter Peter Crouch is a professional English soccer player who now represents Stoke City in the Premier League. His net worth is $25 million dollars. Peter Crouch was born in Macclesfield, Cheshire, England on January 30, 1981; however, at the age of one year, his family relocated to Singapore, where they remained for three years until coming back to the United Kingdom and settled in Ealing, West London. Drayton Manor High School was where he attended school while living in Ealing. Crouch was a gifted soccer player from a young age, and at age 10, he started working as a ball boy. Crouch began his professional career at Tottenham Hotspur as a trainee. After loan stints at Dulwich Hamlet and Swedish club IFK Hässleholm, he joined Queens Park Rangers after failing to make an appearance for Spurs. Following QPR’s relegation at the conclusion of the 2000–01 campaign, Portsmouth stepped in and acquired Crouch for S1.5 million. He had a successful season at Fratton Park, where he scored 19 goals before moving on to join Aston Villa for $5 million in March 2002. After a very unsuccessful stint at Villa, he was loaned to Norwich City in 2003. The following year, he left for Southampton, where he found his form again, and Liverpool eventually acquired him in July 2005. Crouch experienced significant success at Liverpool. On August 31, 2011, he signed a 10-million-dollar club record deal to join Stoke City. He scored 14 goals in his debut season with Stoke and was named the team’s player of the year.