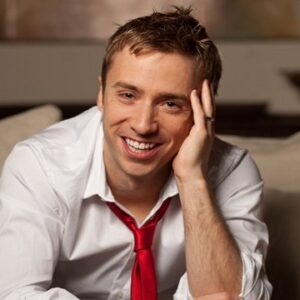 Peter Hollens is a pop singer, songwriter, and producer from the United States who is most known for his a cappella cover music, which he posts on his self-titled YouTube channel. His YouTube channel has over 1.5 million subscribers, and he is active on practically every social media network. He has over 125 songs to his credit and routinely releases new tracks on his YouTube account. He published his first studio album, Hollens, on February 21, 2012, which had 13 cover songs and one original song. His first full-length studio album, Sony Masterworks, was published in 2014. The self-titled album featured 12 cover songs and one original song, “Ashland’s Song,” which was dedicated to his young son Ashland. In 2010, NBC’s The Sing-Off Season 2 included him and his a cappella group “On The Rocks” in five episodes. In 2013, he collaborated with Eric Whitacre and sang on Brian Wilson’s song “Our Special Love” from the album No Pier Pressure as a guest vocalist. He was a special guest on the TV series Studio C in 2016, and he also contributed to the soundtrack. He also appeared in the TV movie ‘Sing Presents a Holiday Remix: Live on YouTube’ that same year.

When Peter Hollens was 12 years old, he first heard Cappella music. He first heard BYU Vocal Point’s album ‘Instruments Not Included’ (1994) and fell in love with the song. During this period, he made the decision to join a cappella group when he went to college. Unfortunately, when he first attended college, there was no Cappella group.

Instead of getting discouraged, he and his buddy Leo da Silva co-founded “On The Rocks,” the University of Oregon’s first male a cappella group, in 1999. The group went on to become Oregon’s first official collegiate Cappella group.

He also became the group’s record engineer. He quit the band in 2006 but reformed in 2010 for an appearance on NBC’s The Sing-Off, which catapulted them to fame. He began receiving requests for his own songs shortly after, and in January 2011, he joined YouTube to upload them.

Peter Hollens, together with Pentatonix and Straight No Chaser, was a driving force behind the revival of Cappella music and the mainstreaming of the genre. His collaborations with other artists are well-known, and he usually collaborates with Lindsey Stirling and Taylor Davis.

He recorded a cover of the award-winning A.R. Rahman song “Jai Ho” from Slumdog Millionaire with Saudi Arabian a cappella artist Alaa Wardi. He was required to sing in Hindi, a foreign language, which he found to be a welcome challenge.

While he enjoys performing in front of an audience as part of a group because it makes the task easier, he prefers to record songs solo so that he may follow his heart completely. He serves on the YouTube creator advisory board and consults for companies including Patreon, Loudr, and Tubular.

Peter Hollens decided to discontinue his French class in eighth grade because he didn’t get along with his French teacher. He negotiated a bargain with his mother to join the choir in exchange for giving up French in his freshman year.

Surprisingly, he didn’t just think singing was for girls at the time; he also didn’t think it was “cool” for boys to sing.

However, as soon as he began singing, he became enamored with it. He even aspired to be a choral director in college after graduating from high school. He originally planned to double major in Music Education and Voice Performance at the University of Oregon, but he couldn’t manage the strain and settled for the latter.

Peter Hollens was born in Ashland, Oregon, on March 4, 1982. He was known as a class nerd during his school years. He studied vocal performance at the University of Oregon and finished with a bachelor’s degree.

He married Evynne, a cappella singer he met at the University of Oregon. She founded the a cappella group “Divisi” at the institution. The two have collaborated on a number of tracks and have performed together on cruise ships. On March 30, 2014, the couple had their first child, Ashland James Hollens.

Peter Hollens has a net worth of $2 million and is an American singer/songwriter, producer, and entrepreneur.

His wife’s a cappella group, “Divisi,” was the idea for the novel Pitch Perfect, which was adapted into a hit film.