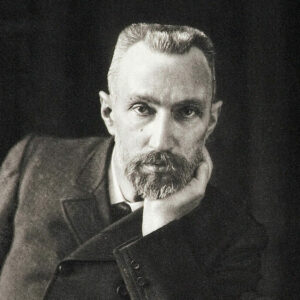 Pierre Curie was a pioneer in radioactivity and a French physicist. In 1903, he and his wife, Marie Curie, received the Nobel Prize in Physics, jointly with Henri Becquerel, for their work on radiation. Curie’s early work was devoted to magnetism research for his doctoral dissertation. He is recognized with inventing and developing a torsion balance for measuring magnetic coefficients that is exceptionally sensitive. Curie’s Law and the Curie Dissymmetry Principle were also proposed by him. Pierre, the son of a doctor, was an outstanding student. He had a remarkable talent for mathematics and geometry, earning his Mathematics degree at the age of 16 and finishing the equivalent of a higher degree by the age of 18. He discovered piezoelectricity while working with his brother, demonstrating that an electric potential could be formed by compressing crystals. To help them with their task, they devised the Piezoelectric Quartz Electrometer. He married Marie Sklodowska (better known as Marie Curie), a fellow physicist, and the two collaborated on separating polonium and radium. They pioneered the study of radioactivity, a word established by the husband and wife team. He was also one of the first scientists to discover nuclear energy and produced groundbreaking findings in the field of radioactive materials study. A horse-drawn cart tragedy sadly cut short the life of this talented scientist.

Eugene Curie and his wife Sophie Claire Curie had him on May 15, 1859 in Paris, France. His father was a doctor who educated his kid from an early age.
Pierre was a bright little child who, as a teenager, showed an affinity for mathematics and geometry. By the age of 16, he had earned a bachelor’s degree in mathematics and had enrolled in the Sorbonne’s Faculty of Sciences, where he received his licence ès sciences in 1878.

Due to a lack of cash, he was unable to finish his studies and obtained a job as a laboratory instructor, which he held until 1882. He was then given responsibility for all practical work in the Physics and Industrial Chemistry Schools.
He used to collaborate with his brother, Jacques, during his early career. They collaborated on crystallographic research and discovered piezoelectric properties. Working in this field caused him to become interested in magnetism.

He conducted experiments for his doctoral thesis to discover if there were any transitions between the three types of magnetism: ferromagnetism, paramagnetism, and diamagnetism. In 1895, he received his Doctor of Science degree after successfully defending his thesis on magnetism.
He demonstrated what is known as Curie’s point, or the temperature at which a substance’s magnetic characteristics change.

He also built a number of pieces of equipment to help him with his experiments. Balances, electrometers, and piezoelectric crystals were among them.

In 1895, he was appointed Professor of Physics. By this time, he was married to Marie Skodowska, a physicist who later changed her name to Marie Curie.

He did studies on what would later be known as radioactive compounds with his wife. The pair did not even have access to a well-equipped laboratory to work in, and they were also experiencing financial difficulties. Nothing, however, could dampen their enthusiasm for science.

Henri Becquerel, another scientist, had created the notion of “radioactivity” in 1896, and the Curies were keen to investigate a mineral, pitchblende, which possessed superior radioactivity to uranium.
In 1898, the Curie pair discovered polonium and radium by fractionating pitchblende. The discovery of radium and the couple’s subsequent work in this sector would lay the path for most of following nuclear physics and chemistry study.

Pierre employed calorimetry to investigate the luminous and chemical effects of radiations. His research laid the door for more research that led to the development of radium therapy.
He was offered a job at the University of Geneva, which he turned down in order to continue the work he and his wife had started. In 1900, he was appointed as a lecturer at the Sorbonne, and in 1904, he was elevated to professor. In 1906, an accident sadly cut short his remarkable career and inspiring life.

He has made substantial contributions to crystallography, magnetism, piezoelectricity, and radioactivity as a physicist. He proposed the Curie’s law and made the first nuclear energy discovery with a pupil. Much of his later research in nuclear chemistry and physics is based on his earlier work.

Pierre Curie, Marie Curie, and Antoine Henri Becquerel shared the Nobel Prize in Physics in 1903. The Curie couple were honored “for their collaborative work on the radiation phenomena found by Professor Henri Becquerel,” while Becquerel was honored “for his discovery of spontaneous radioactivity.”
For his radium research, he and Marie were given the Davy medal by the Royal Society of London in 1903.

Through a mutual friend, he met Marie Skodowska (also known as Marie Curie) and fell in love with her. He proposed marriage to her after being impressed by her passion for research. The couple married in 1895 and had two daughters together.

Irene Joliot-Curie, his daughter, was also a well-known scientist and Nobel laureate. Eve, his second daughter, went on to be a writer.

On April 19, 1906, he was killed in an accident when he slipped and fell under a horse-drawn cart, which ran over him and fractured his skull. He died on the spot.