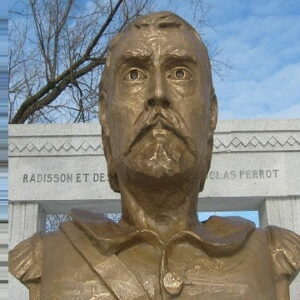 Pierre Gaultier was a military commander, fur trader, and explorer from France. He is credited with organizing the voyages that opened up the area west of Lake Superior, paving the way for the future accession of Western Canada to New France in the Saint Lawrence basin. His achievements, however, went unappreciated during his lifetime, yet he was eventually regarded as one of Canada’s greatest explorers. In the course of their search for an overland passage to the “western sea,” he was joined in his expeditions by his sons, who erected a string of trading posts that helped reinforce French claims in North America for a while. Pierre Gaultier, the youngest son of a big family of French settlers in Canada, opted early in life to pursue a military career. He fought in Queen Anne’s War as a young man and was there at the Raid on Deerfield. During the War of the Spanish Succession, he fought in Flanders and suffered serious injuries. Following his recovery, he began a profession as a fur dealer. He immediately developed a thirst for adventure and embarked on an excursion to explore the territories surrounding Lake Superior, laying the groundwork for future exploration of the region.

At the age of 14, Pierre Gaultier decided to join the army and acquired a cadet appointment in the colonial regulars. In 1704 and 1705, he took part in Queen Anne’s War and was present at the Raid on Deerfield, which involved a long journey through the forest to attack the residents of a sleeping community.

Shortly after, he was promoted to ensign. However, this was a low-ranking position that did not satisfy the ambitious young man. As a result, he chose to enlist in the French army, where he believed he would have a better chance of development. In 1708, he moved to France and enlisted in the Régiment de Bretagne.

He served in Flanders during the War of the Spanish Succession, and at the Battle of Malplaquet in 1709, he was seriously wounded by gunfire and eight saber wounds. The enemy then kidnapped him and held him as a prisoner of war until he was liberated in 1710.

He was promoted to lieutenant after his discharge. However, at this time, he had developed a strong desire to return to Canada, and in 1712, he was granted permission to do so. Back at home, he married and began farming and fur-trading as a means of subsistence.

In 1726, his humdrum life was turned upside down when his brother Jacques-René was named commander of the post du Nord, on Lake Superior’s north shore. Gaultier began trading in the area and was promoted to the commandant in 1728 after his brother left the post to fight the Foxes.

During this time, he heard about a vast river that could go to the Pacific and thence to the Orient’s wealth. He made the decision to investigate the paths leading to the Pacific’s fabled land of wealth.
In 1730, he met Governor Beauharnois in Quebec and devised a strategy with him. In 1731, he moved off from Montreal with three of his sons and 50 men. By the autumn, his son Jean-Baptiste had completed the construction of Fort St. Pierre on Rainy Lake.

They continued on their journey, and on Lake of the Woods, they built Fort St. Charles, which would serve as his headquarters for the next several years. In 1734, the expedition arrived at Lake Winnipeg and established Fort Maurepas near the mouth of the Red River at the lake’s southern end.

During his journey, he also concentrated on his fur trade, which enraged Maurepas, the French Minister of Marine, who believed Pierre Gaultier was more interested in fur commerce than exploration.

In 1738, the expedition arrived at the Mandan Indian towns on the Missouri River in what is now North Dakota. The men were both physically and financially tired by this point. Despite their best efforts, they were unable to locate the routes they were looking for.

They placed a lead tablet near present-day Pierre, S.D., on their return journey, claiming the country for France. Gaultier was sternly chastised upon his return, as his trip was deemed a failure. It would be decades before the French-Canadians acknowledged his achievements.

Pierre Gaultier is regarded as one of Canada’s greatest explorers because of the trips he led with his sons west of Lake Superior, laying the groundwork for the addition of Western Canada to the original New France in the Saint Lawrence basin. He didn’t get much credit for his accomplishments during his lifetime, but he was remembered fondly in the years after his death.

Shortly before his death in December 1749, he was given the Order of Saint Louis.

In October 1712, Pierre Gaultier married Marie-Anne, the daughter of Louis Dandonneau Du Sablé. Four sons and two daughters were born into the marriage. His boys went on to become famous explorers in their own right.
He passed away on December 5, 1749, at the age of 64.