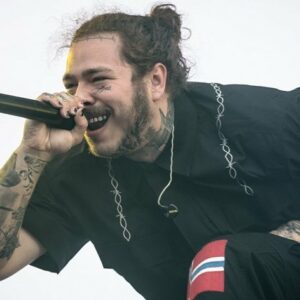 Austin Richard Post, better known by his stage name Post Malone, is an American rapper, singer-songwriter, and record producer. He is best known for his breakthrough single “White Iverson,” which peaked at #14 on the Billboard Hot 100 chart and was later certified quadruple platinum by the Recording Industry Association of America. He’s also recognized for his hit “Rockstar,” which reached #1 on the same list and solidified his status as an up-and-coming singer. Malone, who was born in Syracuse, New York, began playing the guitar at the age of 14 and went on to record his first mixtape, ‘Young and After Them Riches,’ during his senior year of high school. Malone has collaborated with a number of well-known rappers, including Young Thug, Kanye West, and 50 Cent, since his initial smash track. The music of Post Malone has been described as a “mixing pot of grunge, country, R&B, and hip-hop.” When it comes to music, the young vocalist cites Bob Dylan as an inspiration, calling him “a god” and “a genius.” He has a tattoo of former President John F. Kennedy on one of his arms, indicating his admiration for him. Kennedy, according to Malone, is the only president who has spoken out against corruption.

Austin Richard Post, better known as Post Malone, was born on July 4, 1995 in Syracuse, New York, to Rich Post and his first wife. His parents subsequently split, and his father raised him with his second wife, Jodie Post, who was a disc jockey in his teens. He also exposed young Austin to a variety of musical styles, including country, rock, and hip-hop.

Malone and his family relocated to Texas when he was nine years old, after his father was hired as a concessions manager for the Dallas Cowboys football team.

After viewing the video game ‘Guitar Hero,’ he decided to learn how to play the guitar. He tried out for the American rock band ‘Crown the Empire’ in 2010, but was turned down.
He made his first mixtape, named ‘Young and After Them Riches,’ at the age of 16 using the digital audio editor Audacity. He told some of his Grapevine High School classmates about it, and as a senior, they voted him “Most Likely to Become Famous.”

Malone worked at a Chicken Express as a teenager. For a time, he attended Tarrant County College. However, he dropped out and relocated to Los Angeles, California, with his friend and professional game streamer Jason Probst.

Post Malone, Probst, and a few other musicians and producers established the group BLCKVRD after arriving to Los Angeles and began making music together. Malone wrote “White Iverson” shortly after and released it in August 2015. He released a music video for the song on July 19, 2015.

Within a month of its release, the single “White Iverson” had over one million views, propelling Malone to stardom in the music industry. He secured a deal with Republic Records in August 2015.

He also played at Kylie Jenner’s 18th birthday party in August of 2015. He met Kanye West at the party, who was charmed by him and invited him to join him on his track “Fade” off the album “The Life of Pablo.” Malone has since collaborated with a number of well-known rappers, including 50 Cent and Young Thug.
In 2016, the American rapper teamed with Justin Bieber, the Canadian pop sensation, and served as the opening act for Bieber’s Purpose World Tour.

Malone debuted his new single “Go Flex” on the Beats 1 broadcast on April 20, 2016. He released his debut full-length mixtape, ‘August 26,’ in May of that year. In the same year, he made his television debut on ‘Jimmy Kimmel Live.’

On December 9, 2016, he released his long-awaited debut album, ‘Stoney.’ It featured Quavo on the popular tune “Congratulations.” The album debuted at #6 on the Billboard 200 in the United States.
On February 20, 2018, he debuted “Psycho,” a new song he collaborated on with Ty Dolla Sign. The song started at #2 on the Billboard Hot 100 list and eventually rose to #1. ‘Beerbongs & Bentleys,’ his second album, was released in April 2018.

Post Malone talked about his album ‘Beerbongs & Bentleys,’ which was planned to be released in December of that year, in February 2017. Malone released the first single off the album, “Rockstar,” in September. The song debuted at number one on the Billboard Hot 100 and remained there for roughly eight weeks. The song’s official music video was released in November 2017.
On April 27, 2018, his album ‘Beerbongs & Bentleys’ was released, and it was certified double platinum in the United States, Canada, and New Zealand. It also did exceptionally well in other countries, including Mexico, Norway, the United Kingdom, and Switzerland.

Republic Records has dubbed Post Malone the “Donald Trump of hip-hop.” The record label’s executive believes that the events that should have ended Malone’s career have merely increased his popularity. “A affluent child whose parents financed his way into music,” according to the American rapper.

For copying African-American culture, he has been dubbed a “cultural vulture” on social media and in many publications. Malone claimed in an interview with ‘GQ’ in 2018 that being a white rapper is difficult.
The singer stated in a November 2017 interview with ‘NewOnce’ that current hip-hop music does not include individuals talking about “actual crap.” “If you’re thinking about life, don’t listen to hip-hop music,” he added. Malone faced blowback on social media following the statements, including scathing comments from fellow rappers Vince Staples and Lil B.

Post about your personal life Malone is now based in Los Angeles. In addition, he has a $3 million mansion in northern Utah. Malone has previously dated Ashlen Diaz, a well-known rapper. Following Malone’s booking of Diaz for a gig, the two met.

Post Malone has a facial tattoo underneath his eyes that says ‘Always Tired!’ He is regularly the subject of memes. They create words like ‘Post Cologne,’ ‘Coast Malone,’ ‘Water Malone,’ ‘Roast Malone,’ ‘Toast Malone,’ and so on using the rapper’s stage name.