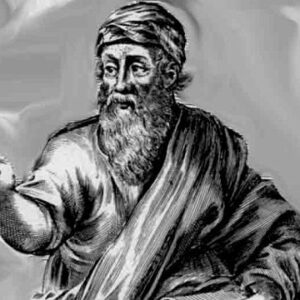 Pythagoras was an Ionian philosopher and mathematician who lived at Samos in the sixth century BC. The majority of the information known today was written down a few centuries after his death, and as a result, many of the narratives available today contradict one another. But one thing is certain: he was born in Tyre to a merchant family and had studied under a variety of masters since boyhood. He departed Samos when he was nearly forty years old. Some claim he travelled to Egypt to study under temple priests and returned after fifteen years, while others claim he went straight to Croton to start a school. Nonetheless, it is apparent that Croton was his primary focus of endeavor, where he established a fraternity and made significant contributions to mathematics, philosophy, and music. Pythagoreans, his followers, were famed for their stringent allegiance and secrecy. Another well-known detail about Pythagoras is that he traveled widely. According to some stories, he travelled to India to learn under Hindu Brahmins. There is also disagreement over his death, but everyone agrees that he was pursued and slain by his enemies.

Pythagoras was born in 570 BC on the Greek island of Samos in the eastern Aegean. His mother, Pythias, was said to be a resident of the island, while his father, Mnesarchus, was a gem merchant from Tyre (Lebanon). He also had two or three siblings, according to legend.

Pythagoras spent the majority of his boyhood on the Greek island of Samos. He began to accompany his father on his trading travels as he grew older. Mnesarchus is said to have taken him to Tyre, where he studied with Syrian intellectuals. It’s probable that he traveled to Italy during those formative years.

Pythagoras continued to study under several masters after that. He knew how to write poetry, recite Homer, and play the lyre. He studied under Chaldean wise men in addition to Syrian experts. One of his early professors was Pherecydes of Syros, with whom he studied philosophy.

Pythagoras journeyed to Miletus at the age of eighteen to meet Thales, a master of mathematics and astronomy. Even though Thales was too old to teach at the time, the meeting was successful in that it piqued his interest in science, mathematics, and astronomy.
He must have also studied under Anaximander, Thales’ disciple. Pythagoras’ latter works bear a striking resemblance to Anaximander’s works. Both his astronomical and geometrical theories appear to have evolved naturally from the elder philosopher’s theories.

Pythagoras traveled to Egypt around 535 BC to learn with the temple priests. Thales had already offered him similar advice. According to some stories, he travelled to Egypt to flee the tyranny of Polycrates, the ruler of Samos at the time. Pythagoras spent about ten years in Egypt. He first gained admittance into the temple of Diospolis and was approved into priesthood after completing the requisite rites. He is also said to have studied for a time under the Egyptian priest Oenuphis of Heliopolis.

Persia’s Emperor Cambyses II invaded Egypt in 525 BC. Pythagoras was kidnapped and sent to Babylon as a prisoner. He rapidly made friends with the Persian priests known as magi and began studying mathematics, mathematics sciences, and music under them.
Cambyses II of Persia died in strange circumstances in 522 BC, as did Polycrates, the tyrant king of Somas. Pythagoras had an opportunity to return to Somas as a result of these events, which he did in 520 BC.

Pythagoras established The Semicircle upon his return to Samos. His teaching style, on the other hand, was unique and attracted to a select group of students. At the same time, the leaders urged him to get involved in the city government, which he didn’t want to do. He relocated to Croton in southern Italy in 518 BC. According to some sources, he went there to study law and stayed. According to some traditions, he travelled there in 530 BC to flee Polycrates’ tyranny, not to Egypt.

Whatever the case may be, it was in Croton that he first began teaching in earnest, immediately attracting a following. He then founded a brotherhood that was available to both men and women. It became into a religious and philosophical school with a lot of political power.
The Pythagoreans, as Pythagoras’ followers were known, were divided into two sects. The mathematikoi, or learners, were those who lived and worked at the school. Others were referred to be akousmatics or listeners if they resided outside of the school. Pythagoras was the spiritual leader of both groups.

The mathematikoi had to live by a set of laws that dictated what they ate, wore, and even said. They had no personal belongings and adhered to a rigorous vegetarian diet. The akousmatics, on the other hand, were permitted to own personal property and eat non-vegetarian meals. They only went to school during the daytime.
Not only concerning ceremonies and rituals, but also about what was taught, the Society maintained absolute secrecy. As a result, despite its significant contributions to mathematics, it is difficult to identify Pythagoras’ work from that of his descendants.

Pythagoras’ importance to mathematics, on the other hand, cannot be emphasized. He is most known today for his concept of numbers. He believed that everything could be reduced to a set of numbers, each with its own set of features, strengths, and weaknesses. He considered 10 to be the most complete number since it was made up of the first four digits (1+2+3+4), which formed a triangle when written in dot notation. He also considered geometry to be the highest level of mathematical study for explaining the physical universe.

Pythagoras’ opinion was founded on his studies of mathematics, music, and astronomy. He discovered, for example, that only when the ratios between the lengths of the strings are whole integers do vibrating strings produce harmonic tones. Later on, he recognized that similar ratios might be used to a variety of instruments. He also preached the immortality of the soul. When a person dies, it takes on a new form and moves from person to person, even down to lesser animals, through a succession of incarnations until it becomes pure, which could be accomplished through music and mathematics.

Pythagoras was a talented musician who could also play the lyre. He was a mystic who believed that certain symbols had mystical meanings and that the interaction of opposites was an important part of the world.
He also taught that the Earth was a sphere in the Cosmos’ center. Because the sphere is the most perfect solid figure, he believed that all other planets and stars were spherical.

Pythagoras is most known for his geometrical notion. He is credited with being the first to prove that the total of a triangle’s angles equals two right angles, and that the square on the hypotenuse equals the sum of the squares on the other two sides of a right-angled triangle.

Despite the fact that the Babylonians had already found the last cited theorem, Pythagoras was the first to prove it. He is also credited with inventing the tetractys, a triangular figure with four rows that sum up to 10, which he considered to be the perfect number.

Pythagoras married Theano, his first Croton student. In addition, she was a philosopher in her own right. She wrote a treatise called ‘On Virtue,’ which featured the golden mean idea. Some claim she was not his wife, but rather a disciple.
According to several versions, the marriage had three daughters: Damo, Arignote, and Myia, as well as a son named Telauges. According to other reports, the number is also seven. Arignote, their second daughter, was a well-known scholar who is credited with writings like as ‘The Rites of Dionysus’ and ‘Sacred Discourses.’
Myia, their third daughter, is reported to have married Milo of Croton, a famous wrestler. Milo was also said to be a Pythagoras associate who rescued Pythagoras’ life from a roof collapse.

Pythagoras, like most geniuses, was a fiery orator who made a lot of enemies. One of them led a lynch mob against the Pythagoreans and set fire to their lodgings. Pythagoras, on the other hand, managed to flee. He then proceeded to Metapontum and died of starvation.
According to some versions, he was killed by the Syracusans during a fight between Agrigentum and the Syracusans. Whatever was the cause of his death, according to most accounts he died in 495 BC. The ‘Theorem of Pythagoras’ or ‘Pythagoras Theorem’ still bears his legacy.